there is Bijiguan 碧鸡关，西山 on the road in direction to 安宁。they are workshops for artists there, but you will not meet a lot of them. a lot of workshops are closed. Some friends of mine moved to other places because there are not so much customers coming there because of the location. But now with the line 3 who stops nearby it's easier to go there. At least it's not as M60 where it's more a bar and restaurant place.. Yes there are some artists there but few.There is also 871 where they have a project to have an 'artist area'. I think artist goes where they can have a cheap workshop and showroom.. today saturday afternoon 23.09 there is an activity in 碧鸡关 you can go have a look..

Ancient tea horse road starts from Yi Wu. I have some videos in Chinese if that would be helpful. I heard of about some English books written by an American traveler, will see if I can find more information ^_^

There is everything on TaoBao :)

@Ishmael, Due to the very far distance to ancient central goverment, Yunnan was seldom wrote in any book or writingｓ. Most of the places in Yunnan even did not have a name till Han dynasty. However, there is a book named《华阳国志.巴志》wrote by常璩 in East Jin dynasty that ;By leading Bashu army to crusade again Emperor Zhou of Shang in1066 BC, Emperor Wuwang Zhou won, and was tributed herb medicine,honey, tea, etc. Among the armed forces, there was Pu people, who are the ancestor generation of Bulang, Hani, De＇ang and Wa minorities,who discovered and domesticated tea(周武王伐纣,实得巴蜀之师......丹漆茶蜜,皆纳贡之)．

Ｎow there are vast evidents prove that Yunnan is the origin of world tea, andat least 1300 years ago, there have already cultivated tea plantations existed in large scales. Now you are still able to visit the cliff painting in Cangyuan, Lincang, wrote about the tribe life 3000 years ago, concluding tea.

Watch this vedio, you will have better understand about Yunnan tea: www.youtube.com/watch?v=oyNX1NNR-iw&t=17s

Ａnd you are welcomed to join my tea course and the endless tea journey ２ :)

I am curious about this tea : The method Shi learned from her grandfather, at its most basic, is fairly simple — pick, sort, clean, sun-dry, hand-rub, dry by roasting, shape into a desired shape, wrap in banana leaves and allow to ferment in the sun. 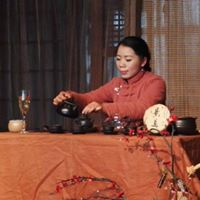 There is also new tea market next to it, named Xiong Da Tea Town, 雄达茶城. Another big one is on Guan Nan Road, called Kind Tea Market,康乐茶文化城,which I like a lot. There are also some other tea markets on Hai Geng Road 海埂路, Da Shang Hui大商汇 and Shi ji Cheng 世纪城...FYI