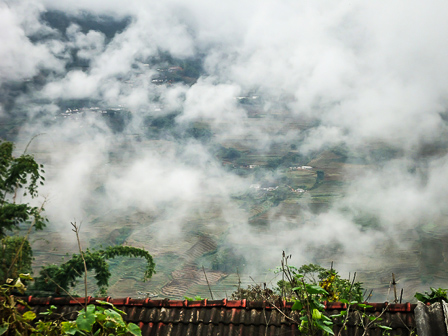 Among the clouds, Dahu Village

It was indecently early when I arrived in Mengku (勐库) with my 'tea brother' and 'tea sister.' We had traveled some fourteen hours and 750 kilometers on an overnight bus from Kunming. Mengku lies to the north of Shuangjiang Autonomous County (双江自治县) in Lincang Prefecture (临沧市).

Mengku was already well-known as a region that produced exceptionally good tea in late imperial China. In 1761, for example, gifts sent by a tribal chieftain in Shuangjiang to cement a marriage alliance in Shunning — present day Fengqing (凤庆) — included sacks of Mengku tea seedlings.

In 1896, a tea trader purchased a large quantity of tea seedlings from Mengku which were packed on caravans and eventually planted by tea farmers in Yunxian (云县), three hundred kilometers northwest of Mengku. If we comb the textual sources even earlier we find that in 1485, Dai tribal chieftains from Bingdao (冰岛) — a famous tea estate located north of Mengku — sent tea seedlings to Xishuangbanna in the province's deep south.

Today, apart from tea, Mengku produces sugarcane and some of the best rice noodles in the province. After a noodle breakfast we walked to the home of a local tea grower and started to drink a raw green pu'er tea called gongnong tea (公弄茶) named after the village where it is grown.

The tea has a freshness and potency that assaults the mouth on first impact, but by the fifth and sixth infusions its sweetness remains in the mouth and throat. The bitter first taste is followed by a sweet aftertaste called huigan (回甘) or liugan (留甘) in standard Chinese, a 'returning, lingering sweetness' that remains in the throat for quite some time.
 
As we drove up a steep and winding path in our SUV en route to Dahu Village (大户寨), I could still feel the lasting subtle sweetness in my mouth. One of my companions who runs a tea shop in Kunming chimed in and said that he too had a sweet lingering flavor in his throat.

He mentioned a tea trader in Kunming who had an idea to call a teahouse 'the sweetness of tea lingers in the mouth and throat for half an hour.' The guy never opened his tea house because his tea business went bust, but I thought that huigan or liugan would be really cool names for any tea house or tea shop. 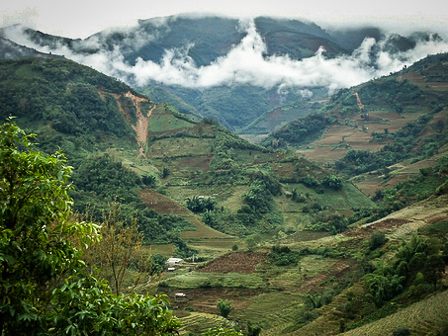 As we continued to snake up the mountain, a popular Tibetan saying came to mind: "I'd rather starve for three days than live without tea for one." By the end of the trip I would become utterly addicted to these bittersweet teas.

We arrived in Dahu Village around 11am. We then hiked for about forty minutes through bamboo groves, banana trees, tea bushes and ancient tea trees. An overnight rain had turned much of our path into slippery mud but had also stirred up the sugary scent of rain-drenched bamboo. By the time I finally climbed over a small wooden fence into a courtyard, the soles of my shoes were caked in mud.

We were treated to a wonderful lunch of stewed pumpkin, fresh green vegetables, smoked meat and chicken soup. After lunch I took a stroll in the courtyard, which overlooked distant tea mountains. The mountaintops hovered above wisps of clouds and seemed inaccessible to mere terrestrials at an elevation of around 1,700 meters above sea level.

There is always something numinous about being among the clouds — watching them move ever so gently, ever so slowly. And as for the tea gods or spirits, I was certain that they had long set up their home among these ancient tea trees and mountain ranges. 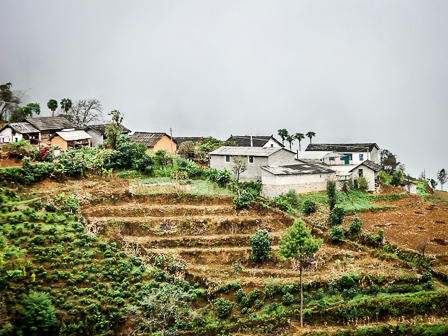 Among the Clouds, Dahu Village

There are two main mountains in the Mengku area, one to the east and the other to the west. Dahu is located on the western mountain and is home to eight main tea estates including Dahu Village and Bingdao. Dahu Village has over 150 households made up of Lahu people and Han Chinese.

The Lahu people (拉祜族) have grown tea here for at least three centuries and some of the best preserved tea trees over 200 years old can be found in their village. Many of the Lahu people from the village converted to Christianity in the late nineteenth and early twentieth century. In the 1920s, many went to a town church every Sunday in one of the neighboring villages — today Christian hymns are still sung in their local dialect.
 
We left Dahu Village around 2pm to make our way back to Mengku. We stopped along the way at a small Buddhist shrine. There was no burning of incense. I tried not to notice the empty beer bottles strewn around the shrine's altar or the half-empty containers of food lying on the concrete tables.

"Some people are complicated creatures," said one of the villagers who had joined our party. Before I could absorb his words and what must lie behind them, we had finished our short prayers and were soon back on the road careening down the mountain.

Our next stop was the Fenghua Tea Factory, a five-minute drive from where I had drunk the bittersweet gongnong tea earlier that morning. The tea factory produces pu'er and black teas. We drank two autumn-harvested premium black teas in the factory's guest room.

The black teas there were not as caffeinated as other premium black teas such as 'China Red' and 'Golden Bud' that I had sampled earlier in the year in Fengqing. We also sampled an eight-year old artificially fermented pu'er tea from Bingdao. I ended up purchasing a small 140 gram cake of the latter.

After a lavish dinner at a Dai restaurant that evening, we continued to drink and slurp back tea. A young man of almost twenty from Yunxian who had joined our party in the morning had a small bag of black tea with him. It was a tea he produced himself.

The following day our game plan was to head out in the early morning to the Bingdao tea estate just over an hour's drive from Mengku. Our driver was the young tea man from Yunxian. We decided to first check out a market in Nanmei Village (南美乡), another hour's drive from Bingdao. The road took us through spectacular mountain vistas and as we entered Lincang Prefecture we passed scores of ancient tea trees.

There are four main ethnic groups in Lincang — the Lahu, Wa, Bulang and Dai — all with their own distinct ethnic markers. A large concentration of Lahu people live in Nanmei Village, and as we roamed around the street market I noticed a number of old Lahu women in ethnic dress walking through the market smoking long tobacco pipes. The Lahu people live around Lincang and Pu'er but many also inhabit Myanmar, Vietnam and Laos.
  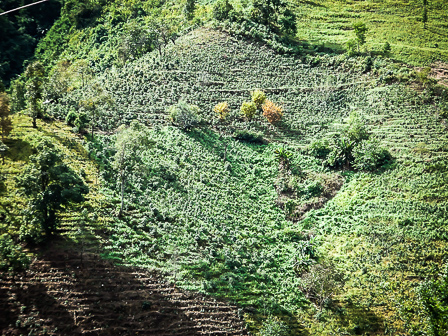 We were waiting for the tea sellers to arrive, but as time was short, we decided to drive back in the direction of the Bingdao tea estate and stop along the road when we saw people carrying goods or produce. "Are you carrying tea in your bamboo basket?" was the standard line from our front seat passenger. If the answer was "yes" we stopped to investigate.

One elderly lady on her way to the market had a large sack of tea. We deliberated whether to buy some and ended up buying the whole bag and sharing the bounty back in Mengku.

We continually stopped along the roadside, on the lookout for tea, always tasting it with the locals. Back in the car the road spilled downhill. Our driver would suddenly interrupt our lively conservations: "Did you see those ancient tea trees on the hill on your left? Let's pull over and take a closer look." I can happily say that by the time we arrived at Bingdao tea estate around lunchtime, I was drunk on tea.

Bingdao is one of the most spectacular spots anywhere to view ancient tea trees because of the panoramic views and the area's sheer elevation more than 2,000 meters above sea level.

Bingdao was run by Dai tribal chieftains until 1904 when they were replaced by centrally-appointed Han Chinese bureaucrats. Because of different administrations, there are several written variants of the name Bingdao. The one that has stuck seems the least appropriate since it literally means 'ice island' or 'ice peninsula.' but it doesn't snow in Bingdao and it never gets cold enough to turn the region into one large tea popsicle.

I didn't have time to investigate any remnants of Dai culture at the tea estate or come to understand the present craze for Bingdao tea. It now fetches ridiculously high prices in Yunnan and across China, a mania reminiscent of the Pu'er tea craze in China in 2005-2007.

After a memorable photo shoot amongst the ancient tea trees, we sampled some of the tea at the home of a 48-year old Bingdao tea seller. I was watching one of my travelling companions make tea and observing how slowly and evenly he was preparing the first wash and the infusions that followed.

He had said something earlier about the process of making tea for others — an offering to share something special with friends or guests without trying to get anything or be anywhere else. The simple act of making a delicious bowl of tea as an offering and in such stunning surroundings renewed my sense of the preciousness of life.

Unlike the pictures I took which now seem fixed and immutable, the stories heard, the stories shared, the stories retold on the trip, as well as the many infusions of teas sipped, slurped and drunk, seemed to change shape all the time.

Each new tea a new miracle. 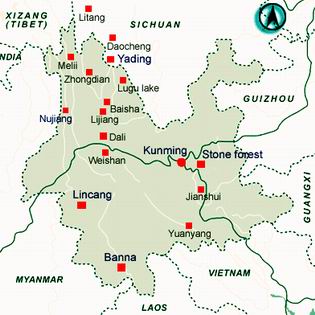 Editor's note: This article was contributed by Peter Micic. If you have an idea for a story or travel piece, please get in touch through the GoKunming contact form.

Great article and vivid descriptions of teas and tea mountains.

Shuangjiang County is a part of Lincang Prefecture.

Where the article refers to "Lincang Prefecture", it actually ought to refer to Linxiang District (临翔区), which is the administrative center of Lincang, a prefecture-level city.

Great piece! I hope to be rolling through this area on a touring bike this spring and this provides some useful eye candy and route planning inspiration. Out of curiosity, what are some of the primary texts you've been consulting? Who are the people telling the story? Bureaucrats, traders or something else?

@Geogramatt: The article has been changed for clarification. Thanks.

Thanks for this, Peter. Great article.

Excellent story! I hope to read about more of your tea journeys here.