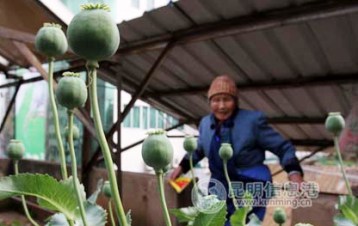 Kunming's clear skies and abundant sun provide ideal conditions for small rooftop gardens, but as an 84-year-old woman living in Xiaoguangcun in the city's north discovered yesterday, not all gardens are welcome.

Early Wednesday, Dushi Shibao journalists were tipped off by another Xiaoguangcun resident that the elderly woman – surnamed Li – had a sizeable garden of Papaver somniferum, more commonly known as opium poppies.

The woman readily admitted to the police that she had been growing the poppies for the past two years and had been using them to treat a chronic cough she has had for the last several years. Li, who lives alone, had been given poppy seeds by her neighbors, who had purchased them at a local vegetable market.

Her neighbors corroborated the story, saying that they had been using the seeds to make chilli oil – they said the seeds made the oil more fragrant.

Growing opium poppies is illegal in China, according to rule 71 of the Public Security Management and Punishment Laws (治安管理处罚法), individuals growing fewer than 500 opium poppies can be detained by police for up to 15 days and fined as much as 3,000 yuan.

Police decided to neither detain nor fine Li, citing her old age, her open acknowledgement that she had made a mistake and the relatively small size of her garden – which had more than 60 plants.

The police confiscated all of Li's plants and gave Li and the neighbors who supplied her with the poppy seeds "education through severe criticism" (严厉的批评教育), according to the Dushi Shibao report.