Music under the stars at Kunming Outdoor Music Festival 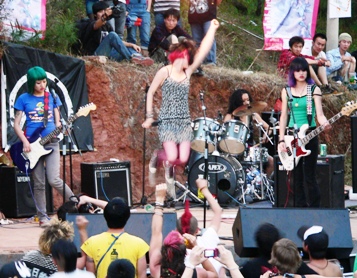 The second installment of the Kunming Outdoor Music Festival took place over the weekend in Taiping Town outside of Kunming - this time featuring two days of music from bands based in Kunming and Dali. This edition of the festival attracted around 600 people and featured a greater variety of performers than the last - plus perfect weather for taking in music under the stars.

Many of the performers from the first edition of the festival last November made it back to perform on Friday and Saturday nights, including organizers Gouride (狗日的), Tribal Moons, Heiyu (黑宇), and No Answer (打死我也不说).

No Answer, whose Chinese name means 'beat me to death and I still won't talk', was arguably the most improved band since the last festival – owing primarily to the addition of vocalist Bai Cai, whose energetic stage presence was able to get the audience more involved than at the band's previous shows (see above image). Drummer Yang Yang also put in a solid performance, confirming her status as one of the more talented young drummers in the Kunming music scene.

Perhaps the biggest surprise at the festival was the opening night performance by the rock/reggae hybrid Made in Dali, who were the consensus favorite among people who attended the festival both evenings.

There was a sizeable military presence at the festival, with dozens of (officially) off-duty soldiers checking out the variety of musical offerings under a nearly full moon. On Saturday night during an 11 pm set by Co Op Sol (邪作社), formerly known as Rap Republic, two military personnel carriers drove into the festival, lights flashing and sirens blaring.

Some of the audience was slightly confused when a few dozen soldiers quickly assembled at the rear of the seating area. Things quickly returned to normal, however, after it became apparent that the soldiers seemed more interested in watching the show than interrupting...好玩嘎！

can i see more pictures ?where?

this seems like bigger news than anything else in this report.

As a foreigner who attended the show, I never felt unwelcome, although the soldiers ' noisy arrival was rather odd.

As the writer of this article, I can only report what I can confirm.

we know that was not perfect..
actually we ve just tried our best(a music festival as cheap and fun as possible for all) and we have work a lot for that...
people don t realize how hard it was and the problems that we ve had.

a few hours before the concert the police came and want us to stop the festival and was trying to make proplems to all of us.(permit, visa, ....)
there presence was a pain for us too and was uncontrolable...sorry for that..
about that racist asshole, we don t know, but we know that his own way to think doesn t reflect ours( we HATE nationalism!!!!)
sorry for that and hopefully the next want will be bether for everibody!!
so if you re not happy don t come or