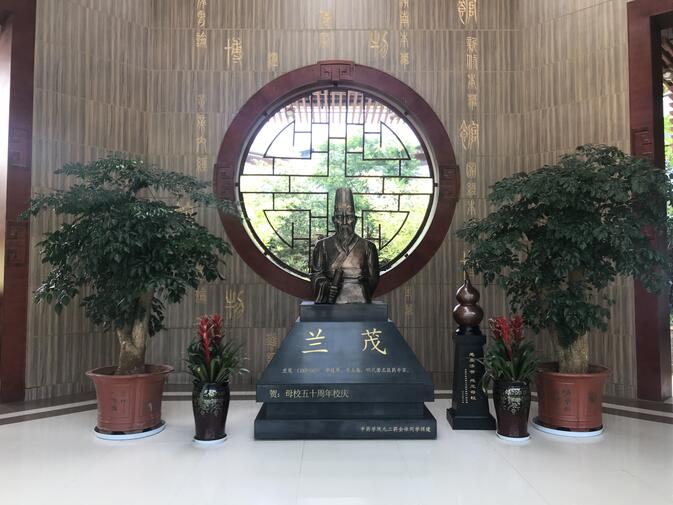 It was an ambitious move for the School for International Training (SIT) to try to set up a study abroad program in China. It was then the 1970s and China was only just moving towards reform. The idea was to include a cultural exchange homestay and a research-focused final project for foreign students.

Unfortunately, it didn't work. But as China opened up to the outside world, SIT organizers persisted and, almost twenty years later in 1994, the program was finally established in Kunming. As a 2017 alumni, I returned to Kunming the following year and went on a mid-July foraging trip with a class to re-experience SIT, talk with the academic director and generally have a good time. 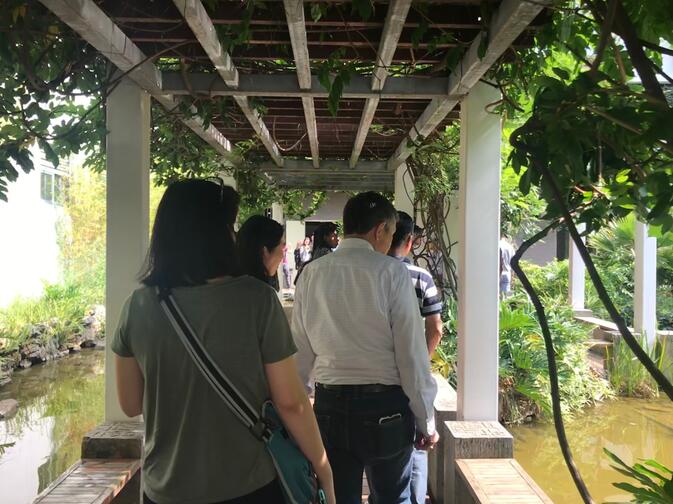 It started out fairly typically for an excursion day on the program, with all of the students meeting up early in the morning and boarding a bus outside the Yunnan Art Theater. I found out that I was not the only guest on this trip, as the director's son had invited two recent acquaintances who had an interest in the program's topics of study — Traditional Chinese Medicine (TCM), health, and the environment. After brief introductions and some conversation, the bus put me to sleep until we arrived at our first destination in Chenggong, the Yunnan University of Traditional Chinese Medicine.

We entered a building with wide steps and climbed to an open foyer with a statue of Lan Mao (兰茂), a Ming dynasty herbalist who compiled The Materia Medica of South Yunnan. After being led across a covered walkway over shallow pond. We found ourselves in a small museum dedicated to understanding how the West has interacted with and responded to the tenets of TCM. 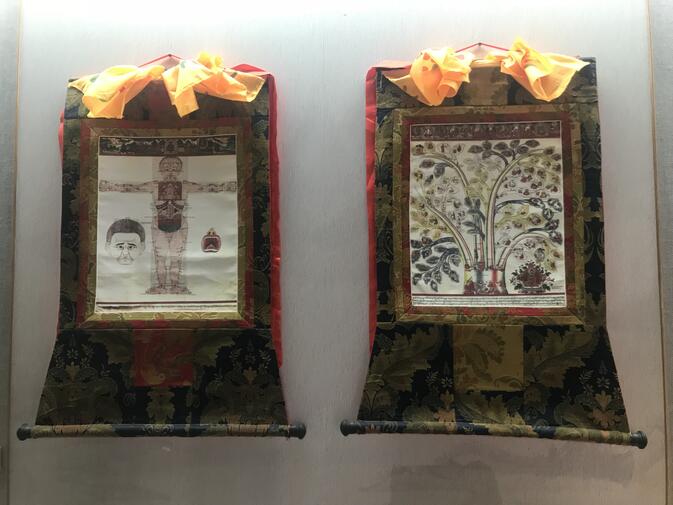 Frenchman George Soulie de Morant was featured prominently, due to his own work with acupuncture and translation of older Chinese medical texts into French. The exhibit took a balanced approach, also displaying Western voices of criticism. The director of SIT, Lu Yuan, has been with the institution in Kunming since its inception. She says that now is a critical time to understand more about TCM and indigenous health knowledge. On the field trip she told me:

Indigenous knowledge plays an important role in the sustainable development of human society and the [preservation of the] natural environment we live in. But this sort of knowledge is currently being lost around the world at an unprecedented rate, a problem largely caused by commercialized modernization and uncontrolled development. 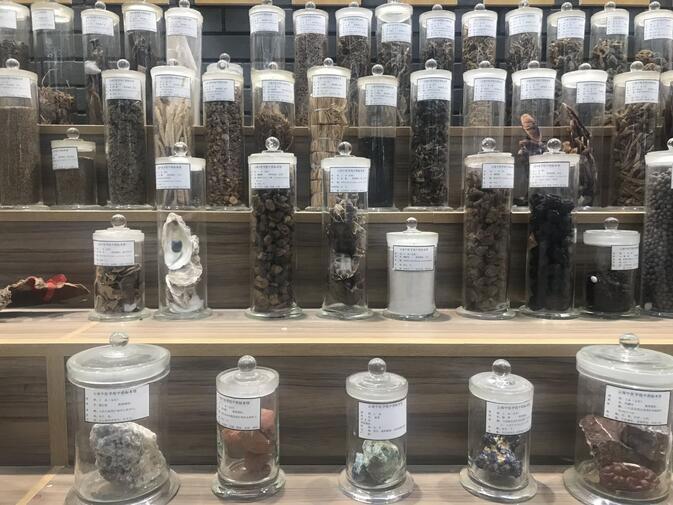 The SIT program's goal, therefore, is not to make students turn away from Western medicine and accept TCM as the ultimate answer to the world's health problems. Rather it teaches people to reflect on China's traditional approaches to health and environmental concerns in order to think of new, innovative solutions. Naturally, some of this includes teaching methods such as visiting museums and sitting for lectures from intellectuals.

It turned out that the other two guests on the SIT trip were also guest lecturers. Dennis Kucinich, a former United States Congressional Representative and presidential candidate, and his wife Elizabeth, a professor and advocate to create policy focused on sustainable food systems, were with our group.

Over freshly steeped herbal teas, Dennis Kucinich told us of his struggles with Crohn's disease since his early twenties. He credited a vegan diet paired with TCM treatments for ridding him of symptoms he'd suffered from for most of his life. The results were something Western medicine simply had not been able accomplish. He did note that Western surgery saved his life early on, and that both Eastern and Western practices obviously both have benefits. 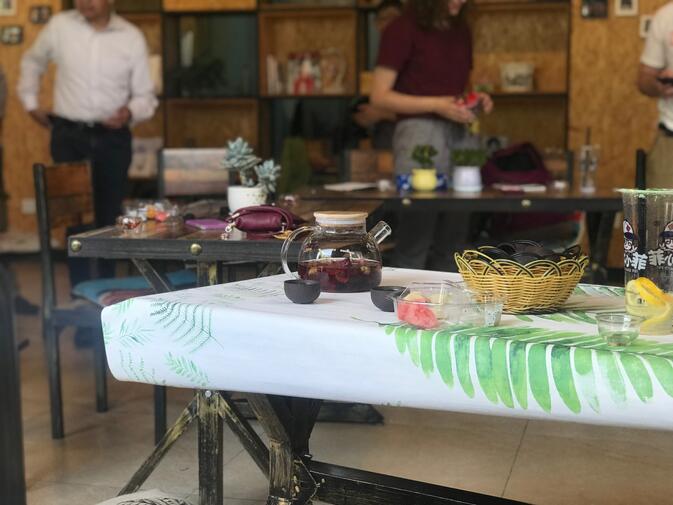 Elizabeth Kucunich, meanwhile focused her discussion on the balance that TCM can bring into people's lives, incorporating her views on issues of global food and health. Rather than having a war on pests on farms, she explained, we need to look at how nature sustains itself. We should be looking for a balance rather than extremes that leave our crops and food systems vulnerable. She went on to say that with the help of programs like SIT, humanity could be "on the verge of a totally different type of consciousness" that blends Western and Eastern views.

We went to the school's cafeteria for a quick lunch before setting out to the day's ultimate destination — a foraging walk near an Yi village south of the city of Jinning (晋宁). Upon arrival, a monument featuring Yi religious artwork enclosed part of a large courtyard with shaded, grassy areas nearby. The village was fairly large, with lots of open spaces. A handful of the students with us were given blue and red plastic baskets for foraging, and then our guide started to lead us up into the forested hills in the distance. But even before leaving the village proper, we stopped to pick fruit from trees. 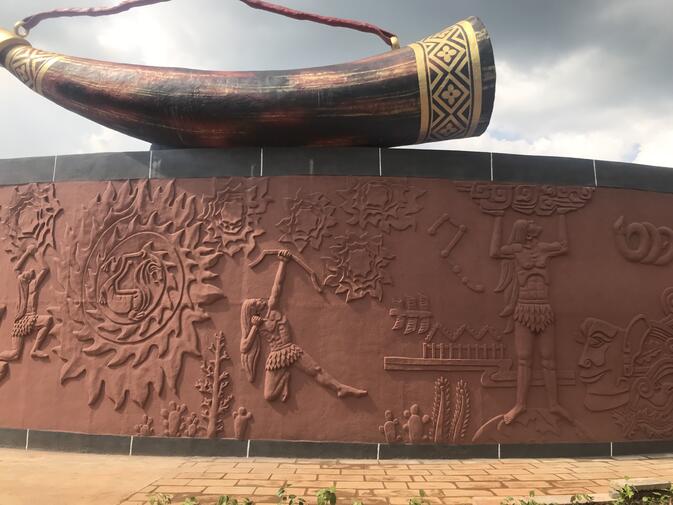 As we walked, our guide provided us with information both about the village and about what we were foraging for. His village has kept foraging as a key component to people's daily diet — a practice maintained out of a concern for health and a balance with the environment. As I looked at the plants, many of which seemed to be bunched together in unrecognizable clumps, our guide would point out this or that leaf and talk about its uses and at what time of year it should be picked. 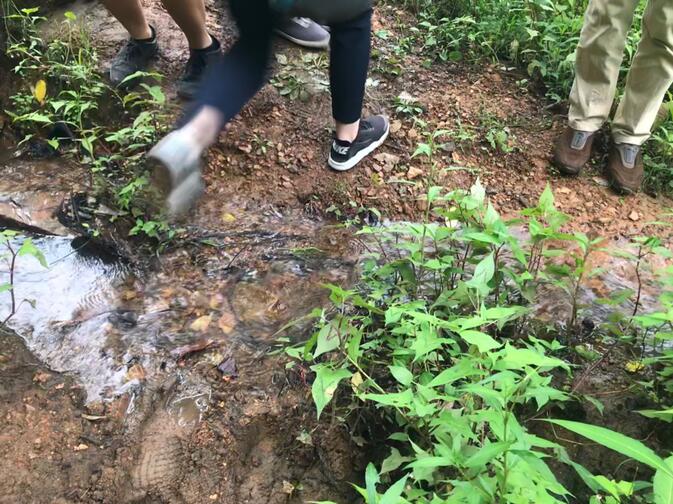 He pointed out stevia plants — a common sugar substitute in the West — the leaves of which were indeed quite sweet. There were other edible leaves for making tea, but we were also told about plants that staunch bleeding wounds. One of the teachers pointed out leaves to be used as mosquito repellant. Those were quickly picked, distributed and rubbed enthusiastically on any exposed skin by those of us being harassed by swarms of biting insects. 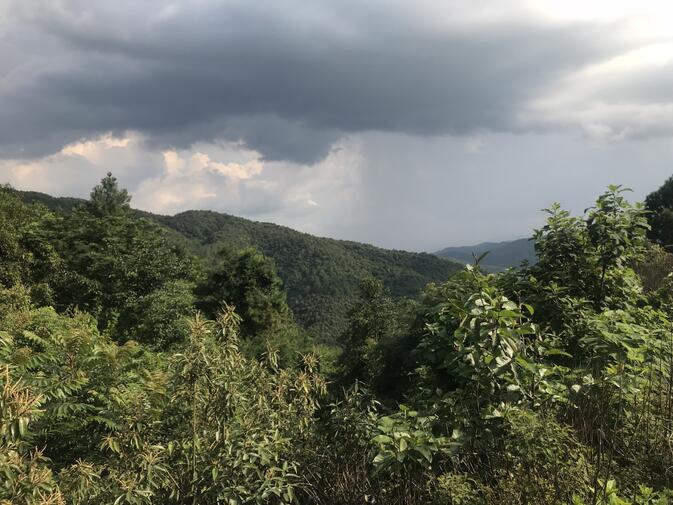 As we walked upward, we ran into a herd of cows and goats just before our path turned into heavy forest undergrowth rather than dirt trail. After identifying a few more plants here and there, we circled back to a nearby house for a water break. A small patch of blueberries grew nearby and, surprisingly, a few beehives were set into a hillside. With this final break, we trekked back down the hill to where we started and prepared for supper.

As cooks busily worked away in a kitchen using our foraged fare, we sat in an adjacent courtyard, chatting and listening to some elderly men play music. The smells for the kitchen became almost unbearably tempting and before long dinner was served. 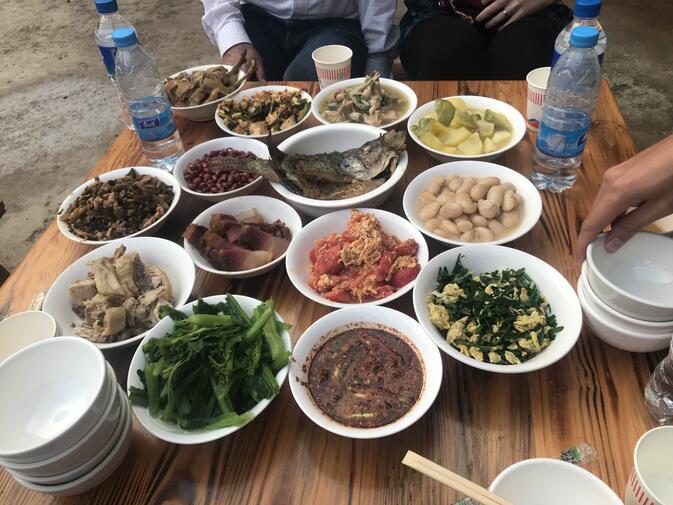 Not everything was from our foraging trip of course — we were not and still aren't expert foragers. But all of the food was locally sourced and absolutely delicious. From the wild mushrooms to the fish to the pears lightly covered in honey, we were in heaven. As the eating began to slow down, women in traditional Yi costume went to each table singing and bearing drinks.

Eventually, after more singing and a brief time dancing around a bonfire, it was time to go. The ongoing activities wrapped up and the appropriate thank you's were said. It had been quite the experience. It's not every day you get a lecture from a former presidential candidate and international activist while going to forage for your dinner. 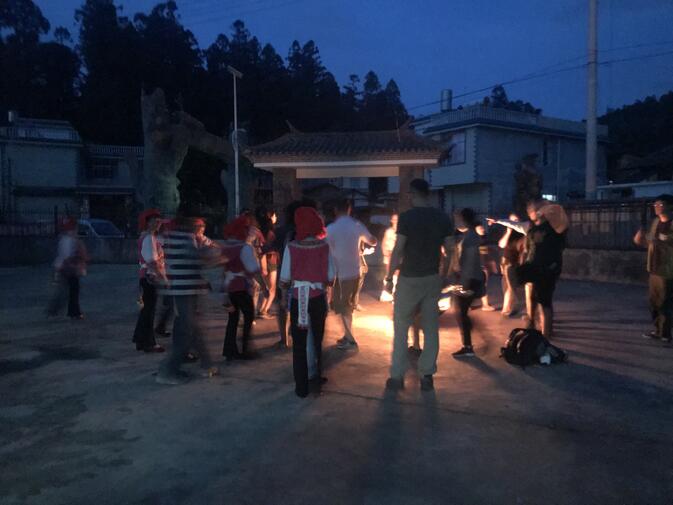 The SIT program was started in Kunming by the late Sam Mitchell and his wife Lu Yuan, and as far as I know it is still going. It's a very good program, though I can perhaps be accused of prejudice because I was associated with it for some time. The thing that inspired me to become so was the fact that many mere undergraduates, some with virtually no previous knowledge of China, were able, within a few months, to turn out such good field studies, the best of which approached work done on a Master's degree level. There are 3 published collections of the best of these studies available at Mandarin Books, all edited by Sam Mitchell (the 1st 2 of the series perhaps better than the last one, in my, and in Sam's, opinion).

The Agriculture University does research on bio controls of pests, as an alternative to chemical farming.

Are these excursions organised regularly and is there any way to join if not part of the university?