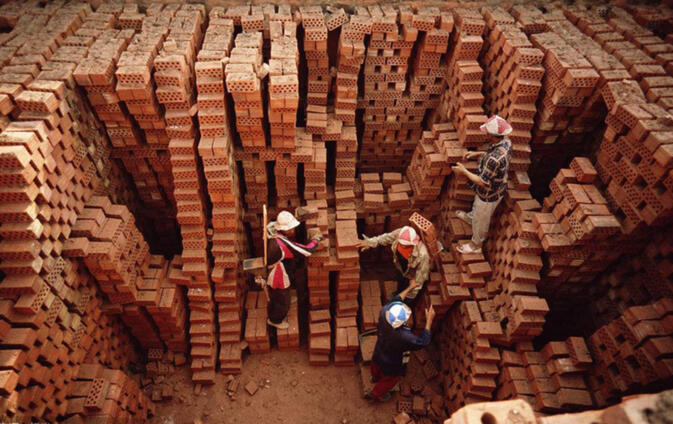 Imagine getting paid in what you produce. That is the reality for nearly two dozen men working in a Jiangxi province factory this week. Now the workers have to figure out what to do with 290,000 freshly kilned bricks, Xinhua reports. Their story has set off a heated online conversation in China about workers rights and the country's teaming 'floating population'.

The brick-makers' story begins outside of Jiangxi's capital, Nanchang, at the Song Family Brick Factory (宋家砖场). There the workers pressed and dried countless bricks each morning and then loaded them onto trucks for shipment to construction sites. There was only one catch — the pay was sporadic. Then the money dried up entirely in September 2017.

The brick factory shut down the next month, the owners citing "tens of thousands in unpaid electric bills" as the cause. Most laborers departed immediately in search of other jobs, but they left behind three co-workers — all of them from Yunnan's impoverished Zhaotong prefecture — to collect and distribute their combined back wages.

In total, the factory workers are owed 90,000 yuan (US$14,000), but the brickyard owners refused to pay. At this point, a reporter from Xinhua's Nanchang branch named Lai Xing (赖星) began researching the story, eventually recommending the workers sue their bosses.

After a brief civil hearing, in which it became clear the factory owners had no cash with which to pay the back salaries, a Nanchang court ruled remuneration should be handled in bricks — 290,000 of them. The value of the bricks is 81,200 yuan, and the court is still negotiating how to recoup the remaining 8,800 yuan owed to workers. Meanwhile, the former factory employees are reportedly having a difficult time converting their newfound 'wealth' into actual money.

The story has gone viral in China as people express frustration over the proliferation and commonality of similar news reports in which migrant workers — referred to in Chinese as the 'floating population' (流动人口) — are often badly mistreated and underpaid. According to a related BBC report, the All-China Federation of Trade Unions helped "more than five million migrant workers in China receive unpaid wages totaling 30 billion yuan [US$4.7 billion] in the last five years".

If recent trends continue, the recurrence of such stories may increase dramatically. China currently has an estimated floating population of 247 million, according to statistics compiled by the National Health and Family Planning Commission. Many of them work far from their places of birth and without proper registration papers, meaning they often cannot legally buy homes or send their children to public schools. The number of people internally migrating in search of work in China is expected to grow by 18 percent — or 44 million souls — over the next two years.

Another reason to allow ALL workers to become trade union members, with none of the bullshit about migrants from rural areas not really being 'workers' because their id cards say they are farmers. Much of china's economic 'success' has been built on the backs of such people - yeah, but...Whose success was that now?

You pay your workers FIRST - only then do you look for money to pay other debts.

Pay them weekly or bi-weekly instead of monthly. If the boss ain't got no money afyer the first or second week, quit.

The courts should calculate the value of the bricks and other assets at liquidation value instead of the retail price..

I don't think the courts are uneducated. I think more cynically. The amount owed is $14k. I bet the owners are still driving flash cars and own several properties. The company may not have assets to pay, but I bet the owners do.

I was thinking the same with the way it would've been played out in court. I'm sure the owners aren't worrying about paying their kids tuition fees or even next months meals compared to some of the workers.

"The company may not have assets to pay, but I bet the owners do."

And that's the difference between limited and unlimited liability ownership.

The workers should hold them liable with brickbats.

It wouldn't be so bad if they were given roofing tiles on top. Ever tried taking 290 000 bricks on a train home?

@alienew: "The workers should hold them liable with brickbats."

Well, that would set a dangerous precedent, which would only result in only tighter enslaving of employees in future operations across the nation. And certainly overriding limited liability of iinvestors only serves to drive investments away from these places.

@JanJal: You mean it would drive investors to go to places where they can get away with not paying their employees if their invested money doesn't magically 'grow'?

Strange to see comments defending the sort of scumbags who employ workers for months on end and then scarper without paying their wages. I guess it takes all sorts to make a world.

@Agreed, cloudtrapezer. Also strange to see what sorts the present world produces...o-oh, damn, I forgot, it's all supposed to be simply a matter of 'human nature'.

@alienew: "drive investors to go to places where they can get away"

Well, technically it would drive them away to places where they can get away with unpaid wages in some other ways than being beaten to death.

Preferably the alternative would be a more civilized way to lose face than doing so concretically.

The process somewhere else would be that after 1-2 months salary is unpaid, the employees quit and contact union, which then more or less peacefully negotiates the best possible solution between the employer and the employee.

The workers can then choose better representatives, if the union-led negotiations still produce nothing but bricks as compensation for unpaid wages.

The problem in China is that if you quit, there are 10 other guys waiting to take your position regardless of how you were dealt with.

But in that scale, there is usually just 1 guy offering those positions, and if he or she is dealt with this way, there may not be another guy taking his place.

Agreed, JanJal, good comment. But I think there's a greed machine in operation that enhances these situations, although I won't claim that it produces them out of thin air. The machine is called global capitalism, "the world system", and in dealing with it, it helps to be pissed off, although that by itself is insufficient as a solution.

Simple lack of will to bring about justice. Similar stories have run just about every year, just prior to Spring Festival, for at least as long as I've been in China. Imagine the response to the headline: 'KFC make employees redundant and pay them with frozen french fries', The result would be a swift official response, handcuffed managers, accompanied by a nationwide social media outcry, probably accompanied by a level of physical damage to which the authorities would be slow to react.. There is no will to prevent it or bring about redress, and the migrants themselves are left with their own particular Chinese Dream/Nightmare to take home to their families. If indeed they can afford to travel home.

Chinese state does have some economic muscle, and tradition of state-owned enterprising. I think that the state should jump in here.

They could confistace this kind of non-monetary resources (like bricks, or frozen french fries), pay market price to the employees, and then sell the goods back to the market (or donate to charity) through it's own channels.

But I guess there is more bucks in cigarattes and oil.

There must be consequences to their refusal to manage their business responsibly and pay out. In days gone by they would have been sent to poor rural areas for 're-education'.

I hate to ruin the parade, but this sounds like bankruptcy, not much else. It's funny if its not happening to you.

In other words, I'll take the bricks and try to sell them, or better yet get together start a business, and steal the clients of the bankrupt firm.