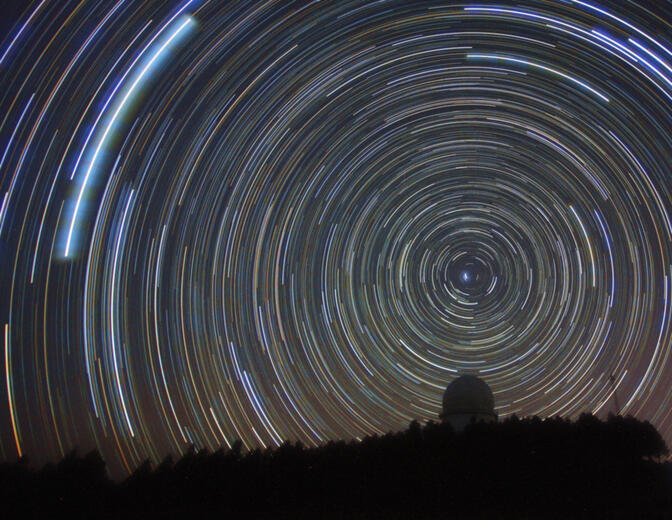 Chinese physicists recently set a record in the strange and puzzling field of quantum entanglement, achieving instant communication between two photon particles 1,200 kilometers distant from one another. The accomplishment — which involved an orbiting satellite and two observatories in western China — has wide-ranging implications for the future of the Internet, encryption and telecommunications in general.

The experiment was directed by Pan Jianwei (潘建伟), a physicist at the University of Science and Technology of China, Shanghai. Pan and his team used a "quantum enabled" satellite called Micius to beam a pair of entangled photons back to earth, one to the Gaomeigu Observatory (高美古) in Lijiang, and the other to a facility in Delingha (德令哈), Qinghai. According to findings published in the journal Science:

In their...experiment, the team sent a laser beam into a light-altering crystal on the satellite. The crystal emitted pairs of photons entangled so that their polarization states would be opposite when one was measured. The pairs were split, with photons sent to [the] separate receiving stations...1200 kilometers apart. They found the photons had opposite polarizations far more often than would be expected by chance, thus confirming spooky action over a record distance.

That 'spooky action' is a term coined by Albert Einstein to describe the theory that objects can be changed or otherwise affected without being physically touched. This is of course true in terms of gravity, but becomes more hypothetical when involving photons.

Photons are elementary particles often referred to as 'packets of light'. According to theory, when two photons become entangled, each one instantaneously 'knows' when the other has been measured or changed regardless of how far apart they may be. What facilitates this phenomenon remains unknown. But the implications are that quantum-based communications in the future will be instantaneous and theoretically unhackable, as any third party attempting to listen in would cause immediate and detectable interference to the entanglement.

The Micius Quantum Satellite (墨子号量子卫星) — named after the philosopher Mozi — is part of a larger, 680 million yuan (US$100 million) quantum space project funded by the Chinese government. Over the next five years, more satellites with capabilities identical to Micius are planned for launch. Researchers hope to create a basic quantum-based communications network, one that could vastly affect the way computers process information or how quickly and stably the Internet functions in the future.

Well done Patrick for picking up the Lijiang connection.

Just to be clear, the entanglement experiments are a few years old now, and originally done by other countries/organizations. China has just moved the envelope on how far, which is still a nice achievement.

This stuff always blows my mind. 'Reality', if that's what it is, is simply not the way we like to think about it.

September 17, 2021 "I have been specializing in teaching The TOEFL Exam for over 10 years, and I can help you Achieve Excellence On The TOEFL Exam. Only for serious st …"
Living in Kunming Scottish guy