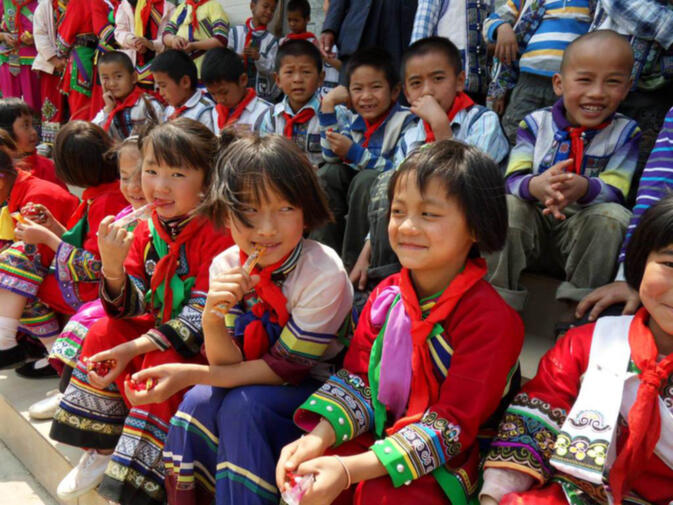 More than a decade ago, reality television shows revolving around the fashion industry began popping up on networks in the United States and Europe. The genre has proven its staying power, and along the way helped elevate clothing design and modeling to new heights worldwide. It now appears four elementary schoolchildren from Yunnan have been swept up in the enthusiasm, as they are on the verge of a chance to become runway models at one of the world's most prestigious fashion events.

The children all hail from the Stone Forest, from a tiny village called Suoyishan (蓑衣山村) with a population of fewer than 2,000 people. Attending the Guo Li Hope Primary School (国立希望小学) for poor students, the kids were included in a group of 100 Yunnan students chosen to participate in an outdoor catwalk May 21 on the grounds of their school. The event was jointly sponsored by film star Zhang Guoli and fashion brand VIKY'Z.

After modeling clothing designed and provided by sponsor VICKY'Z — a China-based brand specializing in fashion for both adults and children — the four Stone Forest girls were selected to advance to a nationally televised final show to be held this July in Beijing. There they will once again strut their stuff against other students from Anhui, Tianjin and Zhejiang. Whichever group is selected as the winner will then travel as models to New York Fashion Week, which runs this year from September 7 through 14.

With little to no exposure to the world of fashion show runways, the Yunnan kids were put through a month-long crash course in modeling. In addition to their regular studies, the students learned how they would be expected to walk and carry themselves. After completing their training, the children donned tailor-made 'peacock patterned' outfits provided by VICK'Z.

And while the event was certainly designed to raise publicity for its fashion company sponsors, it also offered a unique chance to instill self-confidence in primary school students, said a Guoli Hope School teacher surnamed Huang. The inclusion of children from Yunnan in the Beijing show may also have the unintended consequence of further raising national awareness about the state of rural schools in Yunnan.

Long one of China's poorer and less well-educated provinces, Yunnan is under intense pressure from Beijing to raise academic standards and graduate more students from high school and university. Unlike many of their east coast counterparts, Yunnan schools are often far-flung, underfunded and understaffed, as 57 percent of the population resides in the countryside. In small villages, the pressure on school-aged children to help contribute to family incomes can be intense, causing many to abandon their studies and seek work. For the four Stone Forest girls at least, school is most likely seeming like a pretty fun option these days.

Oh hell look, I hope these kids have fun and even maybe become child models or something and help out their families, but if this being passed off as an effort by the overwhelmingly ridiculous, superfluous, flaky airhead fashion industry is supposed to represent giving useful economic opportunities to poor rural populations in Yunnan, I'm afraid I remain to be convinced.

Attendees at the event in New York: "Ooo, aren't they cute, geegaw geegaw geegaw..." Enough to make you barf.

a similar trip to maryland has been cancelled

They'll get a sniff of that fresh air and return home with dyed blond hair and botox.