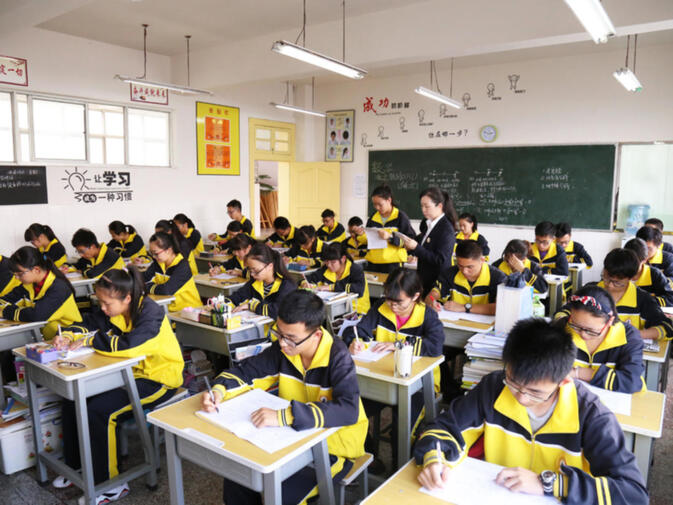 The Chinese government is looking to raise education standards by making access to high schools easier and more affordable. The focus of such reforms has fallen squarely on the "underdeveloped" provinces of the country's west — including Yunnan — where enrollment and graduation rates sometimes lag far behind those of schools on the east coast.

Even official statistics sometimes vary as to how many teenagers nationwide receive a "senior secondary" education or, in other words, attend high school. National statistics released by the Ministry of Education (MOE) say 87.5 percent of public high school-aged students who qualify to move up a grade actually enroll for their next year's studies.

The new 'Guidelines for Popularizing High School Education' released recently by the MOE look to raise that number to 90 percent everywhere by 2020. While a 2.5 percent increase would not necessarily represent a huge jump nationwide, in poor or remote areas, boosting enrollment standards to nearly 90 percent may involve the majority of high school-eligible kids.

The plan calls for more spending, especially in nine regions tagged by Beijing as "prone to poverty". These areas, according to the guidelines, include large swathes of central and western China. Schools in such places that enroll large numbers of minority students will receive government-sponsored aid on a per-child basis, as will those catering to disabled pupils or those from migrant families. No mention has yet been made as to how much individual stipends will be worth.

Additionally, the strategy calls for renovating schools in poor locales, expanding access to computers and other technology, and building new facilities in areas experiencing upsurges in population. For example, a pilot program launched last year in Xinjiang provides funding for large-scale apartment developments to include high schools in their blueprints.

Teacher training has also been labelled a priority, as high school class sizes in low income schools are often enormous. In Guangxi — an autonomous region with 46 million inhabitants — 13,000 new teachers are needed simply to conform to government class limits. Some of the relief, in Guangxi and elsewhere, will also come in the form of alternatives such as vocational training schools.

Commenting on the need for robust change, educator Ma Dacai told China Daily the new guidelines will help his students catch up to their east coast counterparts. He is a high school principle in Yunnan's Nujiang, a prefecture long-known as one of the province's poorest. Ma's concerns echo those voids Beijing is looking to fill, which he explained thusly:

Take my school as an example. Our computers, library and teachers are not as good as those in Shanghai. What's worsening the situation is that some students cannot afford the charges for schooling because their parents have financial difficulties [due to] long-term poverty.

All of these reforms are aimed at making high school instruction in China "fair, high quality and diverse", according to Minister of Education Chen Baosheng (陈宝生). He named those three qualities on April 24 at a national education meeting held in Chengdu. His goals are lofty, and bureaucrats, administrators and teachers have only two and half years to complete them.

It's about time! This is SO important for poor areas of Yunnan! As far as I'm concerned, the stipends should make it 100% free for any student to study in senior secondary school, as well as to room and board there.

It is a start. One out of eight kids that passes the Zhongkao (中考) don't go to high school and that is a big loss to China.

Rural schools suffer from low paid teachers and a lack of books and materials. I don't know how it is these days but 10 years ago the MOE would announce budget increases Y-O-Y but actual spending would actually decline Y-O-Y. I hope the additional spending is for teachers and books.

Renovating schools means a good chunk of the money will disappear.

Anyone know what percentage of those taking the ZhongKao (and GaoKao) progress to the next stage of education. Interested.

@Ocean: Lots of info in this document. Discusses dropout rates and the like:

"What is keeping the poor out
of college?"

@Geezer Thanks. I've always wondered. Suspected it might be lower percentages than that.

@Ocean: I thought it would be lower as well.

Oddly enough, China committed to increased education spending about the same time it was renovating it's first aircraft carrier. The second carrier was launched this week.

@tiger: For the village in question, I'm referring to the percentage of middle-school grads who go on to senior secondary, at present. In this village, the percentage just a few years ago was even worse. And the percentage of elementary school kids who go to middle school is less than 50% now - worse 10 years ago - in fact, 10 years ago those who completed elementary school was less than 50% too. Yeah, I know, the law says everybody has to study through junior middle, but it was ignored, with no consequences other than for the future of the kids.

Then you are comparing apples and oranges, without switching subjects first.