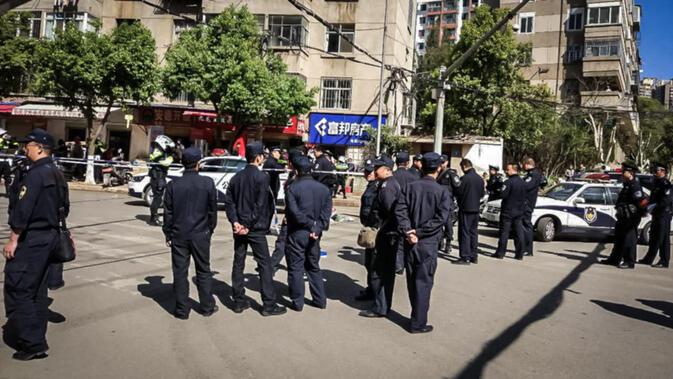 Reports of gun violence in Yunnan are extraordinarily rare, the result of stringent laws and a general lack of availability. However, some police in Kunming are allowed to carry sidearms, and yesterday an officer fired his weapon once at an intersection often packed with pedestrians and hectic traffic. The shot found its mark, injuring and subduing a man armed with an axe.

The situation reportedly began around 10:45am, when an unidentified man and woman began arguing near the intersection of Hongshan Dong Lu (虹山东路) and Hongshan Nan Lu (虹山南路). The argument escalated, according to bystanders, with the man first kicking the woman to the ground and then menacing her with a hatchet.

A crowd of onlookers and those attempting to diffuse the situation gathered, and in the commotion the attacked woman was able to call police. Officers arrived quickly from a nearby station, but their attempts to calm the enraged man were unsuccessful. In an ensuing scuffle, a middle-aged bystander and a policeman were wounded by knife slashes, both in the arm.

Police officers on the scene then called for backup. Still incensed the assailant next turned his anger on a police car, smashing its hood and windows with his axe and threatening more passersby. At this point, the decision was made to disable the attacker. An officer armed with a service revolver fired one shot, striking the man in the leg and ending the tense scene.

As is typical with stories of this kind, details in local media are extremely vague. No mention has been made as to the cause of the dispute, with news outlets simply referring to the axe-wielding man as "mentally disturbed". Once the melee ended, the attacker was taken to nearby Kunming Medical University Second Affiliated Hospital, where he was officially arrested. He and the other two injured parties were treated for non-life-threatening injuries, while, following questioning, the woman involved in the initial scuffle was released.

Officers tasked with patrolling neighborhoods throughout Kunming were not typically authorized to carry firearms until the horrific bloodshed at the Kunming Train Station in March 2014. Before that, they could be temporarily issued weapons in emergency situations. In many cases, detectives were allowed to carry guns on a daily basis but not regular patrolmen. That has changed, with beat cops now undergoing "tactical combat" training before hitting the streets armed with guns.

Seems to me the cops involved might be commended for handling the situation rather well.

Imagine if he had miss his mark!

imagine if this was in small town america, 40 cops, all armed, 300 rounds. empty mags, just in case.