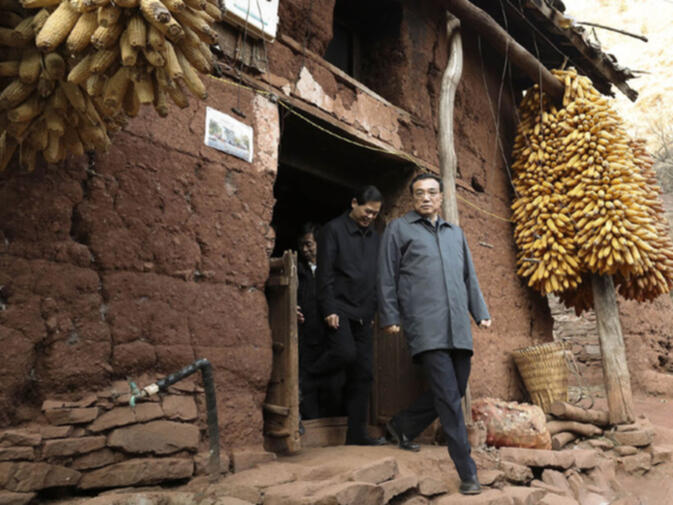 Visits to Yunnan by senior officials from Beijing are never announced before they actually take place. Because of this, it came as some surprise to rural residents in the province's northeast when the second-highest ranking person in the Chinese government, Premier Li Keqiang, came calling in person on January 23.

Li toured villages in Zhaotong Prefecture (昭通市) and spoke with families who are undergoing moves to new housing. He first stopped in Dachong Zirancun (大冲自然村), a village on the outskirts of Zhaotong City. He met outside in a small public square with people who currently live in decades-old homes, many of them made in the traditional way with mud-brick walls and wooden frames.

The owners of these houses are beset by problems limiting their upward mobility, according to state media reports. The first is that their homes are no longer adequate in an age where city dwellers have access to structurally safe dwellings, 24-hour hot water, electricity and internet. The second is that they farm "barren land [that] is no longer suitable", according to a CCTV report.

To address these deficiencies, locals are working with the provincial government not only to relocate to modern high-rises, but also arrange financing so they can own the new apartments. CCTV quoted the Premier as explaining the arrangement will work thusly:

The local government will pay half of the cost of building new houses, and villagers can get interest-free loans of up to 60,000 yuan for three years, in addition to using their own savings. The villagers are willing to take out loans, and the government should work with them to complete the relocation as soon as possible, the Premier said. 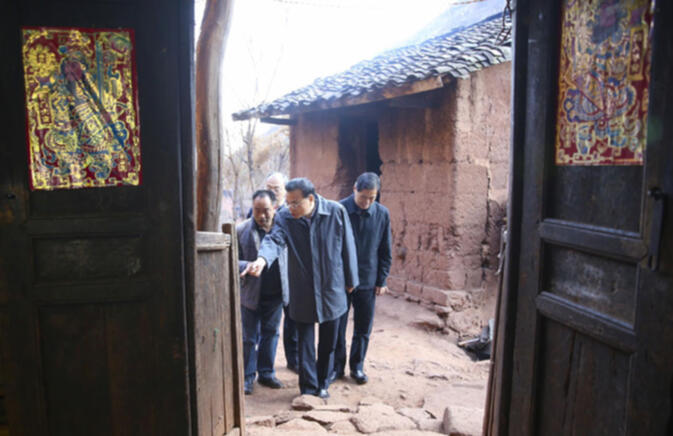 The scheme raises a number of questions. The most pressing of these is how farmers in one of Yunnan's poorest regions can expect to pay loans — interest free or not — when they are being moved off of their land and into a city. The answer, although not explicitly stated in the press, is that urban living will provide easier access to more, and more lucrative, job opportunities for those that move.

The plan is part of a larger but as yet loosely defined strategy to "raise one million people [in Yunnan] out of poverty" by the end of 2017. No budget has been released, but the undertaking encompasses ten points, including but not limited, to vocational training for some relocated families, improved access to modern utilities, the "cultivation of micro-enterprises", and the sustained development of infrastructure in rural areas.

and now all the other recent stories make sense. Big boss is in town, better look busy!

Of course another question is, will there be enough jobs for everyone in the mass urbanization, while the technology is taking over. And what jobs are these people going to do. Partly influenced by all the "for rent" shop signs in Kunming, I was expecting the whole mass-urbanization experiment to crash last year, but apparently that didnt happen. And hopefully it wont.

If Beijing wants to promote this they'd better do something about all the bloody hukou problems that have contributed to different classes of citizenship and have fueled China's capitalist rise by providing cheap labor with little recourse, thereby enabling rather serious economic differences so that the Chinese economy now competes 'successfully' with that of other countries on the usual tilted table of global capitalim.

Invoking the hukou system, which has existed in China for four millennium give or take a few centuries, as fueling capitalism is absurd.

How come it had no effect until the last 40 years?

The cheap labor and population control provided by the hukou system strengthens China's centrally planned system by providing the coercive control necessary to effect a modern serfdom key to economic growth to succeed on the cheap. Only by tying most Chinese to the land can the selectively chosen be allowed to participate in wealth, education, healthcare and prosperity.

Fortunately, as the water rises so do all boats.

Mass urbanization results in poor uneducated, unskilled rural workers migrating to urban centers where they are denied education for their young and healthcare for the aged. Without the requisite hukou, they are unable to avail themselves of labor contracts or protection of labor laws, these newly 'urbanized' folk are cheap labor to be exploited.

There was a time when annual reports by Chinese ministries reported actual spending against budgets. The last of these reports I saw indicated, while budgets had been impressively increased, actual spending on education and healthcare had declined year on year.

Recently, it was announced that 12.6 billion yuan would be spent to provide three years training to new 'Family Doctors.' This was in response to low pay for General Practice doctors. The goal is to double the number of low trained underpaid doctors to alleviate pressures on overworked, highly trained and highly paid doctors.