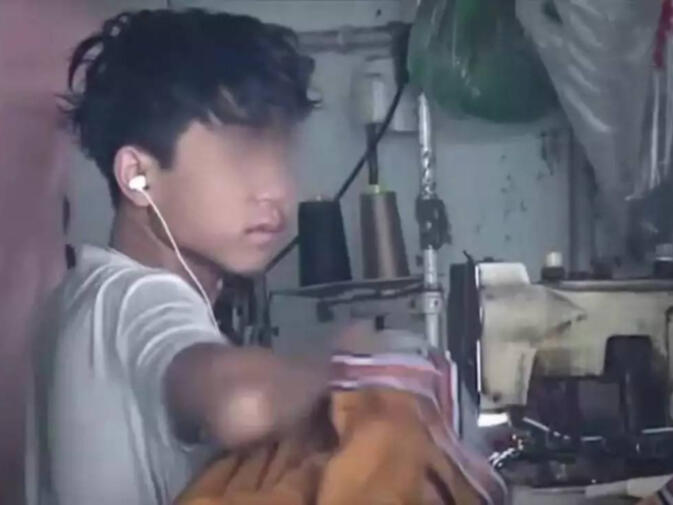 In a fit of superb investigative journalism rarely seen out of Yunnan, the Spring City Evening News made waves across China this week when it published an exposé on child trafficking. The story, complete with interviews and videos, accuses hundreds of clothing factories in Jiangsu province of illegally employing thousands of teenage migrant workers from Yunnan under appalling conditions.

The article chronicles the experiences of minors working in the city of Changshu (常熟), known as one of China's largest garment manufacturing hubs. Many of these underage workers — Chinese law stipulates children under 16 cannot be employed — are middle school dropouts from the countryside of Yunnan, and manage to make it to Jiangsu through headhunters.

The brokers often make lavish promises of high salaries and of the possibility of creating new lives on China's east coast. 'Recruits' are given 200 yuan cash and driven in groups via private cars to their new jobs 1,900 kilometers away. Some of the children, faced with the trappings of such extravagance, even convince their friends to join them.

An estimated 6,000 kids are taken from Yunnan in this way on a yearly basis, each one earning headhunters a 1,000-2,000 yuan payment from sweatshop managers. Once the young migrant workers arrive in Changshu, they often face extreme overwork and little to no actual pay.

From the dozens of interviews conducted by the Spring City Evening News, a pattern of abuse and practices bordering on slave labor emerges. One 15 year-old explained that when he first arrived at a Changshu factory, he was required to work from 7am until 10pm, and in that time expected to produce 350 articles of clothing. The factory owner steadily increased that number until it reached 725 pieces per day. If the target number was not reached, the boy was forced to stay until he finished.

Eventually, exhausted and destitute, the boy escaped from the factory. However, in his words, "The boss quickly caught me and fined me 3,700 yuan for a day of missed work. I didn't have the money, so he took my computer instead." When interviewed, the boy was still working in the factory, kept there by a combination of helplessness and fear.

According to the Spring City Evening News report, factory bosses routinely confiscate the national identity cards, bank cards and cell phones of new 'employees', virtually cutting them off from the outside world. Additionally, the child workers are not paid "until the end of the year", a promise that keeps them at the financial mercy of the factory.

Beatings and threats of violence are routine, according to those interviewed. And the stories of beatings, confiscation of personal articles and quasi-slave labor were not limited to the child workers themselves. One factory owner bragged on video that if the seizure of IDs is not persuasive enough "then we just beat them to get them to stay".

The 2,000 clothing producers of Changshu earn a combined 13 billion yuan (US$1.9 billion) annually, many seemingly off the sweat and forced labor of kids such as those from Yunnan. Since 2012, 107 companies in the city have been fined a combined three million yuan (US$434,000) for employing minors. The penalties have apparently had little effect on illegal employment practices. Nonetheless, after reporters uploaded some of their interview videos to internet news websites, the government of Changsu launched an investigation, vowing to make sure "this never happens again".

Good to see an instance of journalists apparently doing what journalists should be doing as the income gap continues to widen, as reflected in the value of stock portfolios and owners' incomes, and as labor continues to be exploited.

Good work done there. A glimpse into hidden China.

Let's hope the Jiangsu government make good on their promises.

As these companies provide more of a living than the government will, nothing will happen apart from a fine and a slap on the wrist. Notice 107 companies over 4 YEARS only paid 434,000 dollars, and NOT closed down. Obviously, not just the companies benefiting from this.

"Nonetheless, after reporters uploaded some of their interview videos to internet news websites, the government of Changsu launched an investigation, vowing to make sure "this never happens again".

...actually meaning the reporting of such matters.

@ vicar: I agree, such companies ought to be shut down.

With the total earnings over the past four years being 7.6 billion dollars there's no way dishing out fines of about four hundred thousand dollars is going to make a dent. It just becomes part of their business expenses!
Bit harsh as I'm labeling all of them as trading the same way saying it like that but I'd bet it's quite a large chunk of them.

I wonder how many Changshu cops didn't already know that this sort of thing was going on in their local districts.

Fined? Shut down? When will people realise that if the punishment is not as bad as the crime then people will keep offending? Get the abused kids to testify and put the cu*** in jail for their various crimes, or better still, make them work in the conditions they made the kids work in for a few years for no pay, with the kids as their bosses.