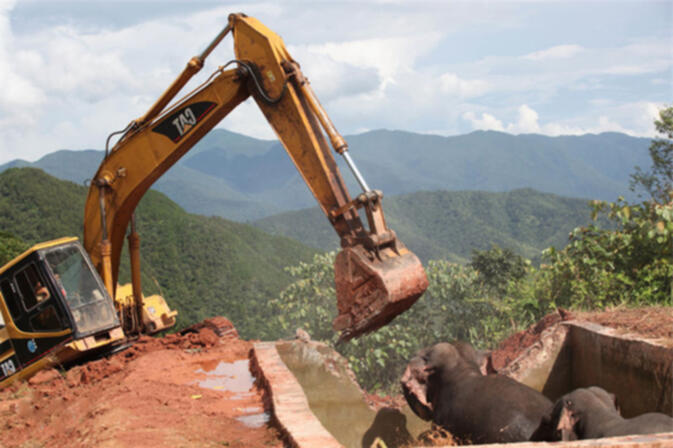 The relationship between China's only herds of wild elephants and the people who inhabit the same regions is sometimes tenuous and occasionally deadly. Such was not the case this week, as dozens of police and local volunteers in Xishuangbanna banded together to free three elephants trapped in a mountainside cistern for nearly 48 hours.

The pachyderm trio — comprised of two adults and an infant — was discovered stuck in a small uncovered storage pond on October 9. They had presumably waded into the water to bathe, not knowing the concrete structure was four meters deep. Once inside, vertical walls trapped the animals while at least 17 other members of their herd milled helplessly around the pond.

The sheer number of elephants in the area initially hampered the rescue efforts of nearly 100 forestry police and locals. Together, the would-be rescuers decided to drop sandbags into the cistern from a helicopter in hopes of creating a ramp the trapped animals could use to escape. Efforts were rushed because the baby elephant was forced to tread water or be supported by the two adults to keep its head and trunk above water. 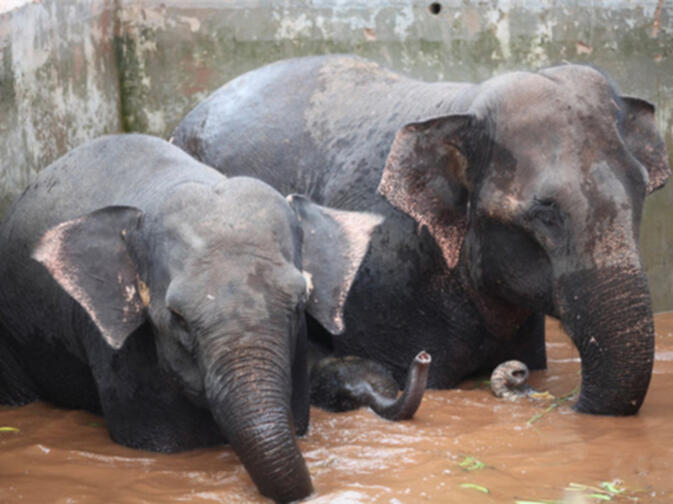 Officials located a helicopter in Jinghong (景洪) and, once requisitioned, flew it 200 kilometers northeast to the village of Mengwang (勐旺), itself only a short distance from the stranded elephants. Unfortunately, the plan had to be scrapped after several hours, as noise from the helicopter disturbed the gathered pachyderms. Forestry police also worried a misplaced sandbag accidentally dropped on an animal could provoke a stampede.

A second plan was hatched, and the platoon of rescuers brought in a backhoe. When 14 of the elephants departed to forage in the nearby forest, police set off boxes of firecrackers to scare away the remaining three onlookers. The backhoe operator then dug a chute into the hillside, while police kept curious elephants at bay with sporadic rounds of fireworks and water was drained out of the reservoir. Once the cistern wall was exposed, it was torn down. The three captive animals ambled out of their prison after nearly two days and rejoined the herd. Within minutes, according to police reports, the entire collection of animals had disappeared back into the forest.

Yunnan is the only province in China still home to indigenous Asian elephants, a local point of pride and focus of some national support for the past six years. In 2009, a 54,700-hectare, cross-border nature reserve was established in Xishuangbanna and Laos in hopes that herds could move about unmolested. More recently, the government of Pu'er spent 2.6 million yuan (US$420,000) to establish an 'elephant feeding ground' to keep the wild animals away from cropland.

Yunnan's elephant population hovers around 300 individuals and is thought to be growing. The rise in numbers comes despite decades of habitat loss, periodic poaching and the occasional clash with farmers. The rise is something officials in Xishuangbanna and neighboring Pu'er credit to conservation and educational efforts in rural areas frequented by elephants. 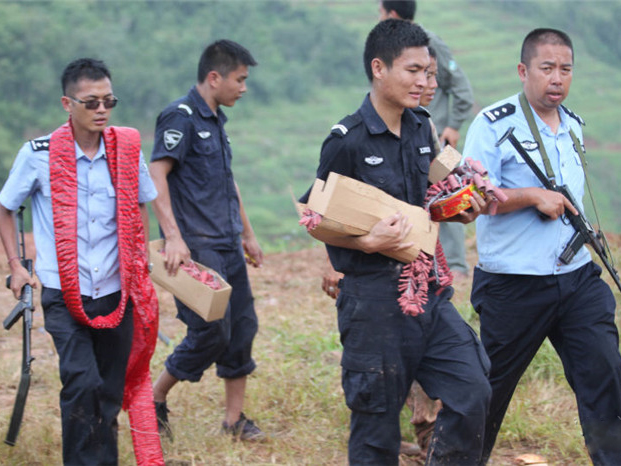 Just another day at work for the Yunnan forestry police

Good job by the authorities and volunteers in planning, replanning, and executing the rescue.

Not sure the tiny little gun that guy is carrying would do much to slow down an angry elephant.

Video of the rescue on Nat Geo: