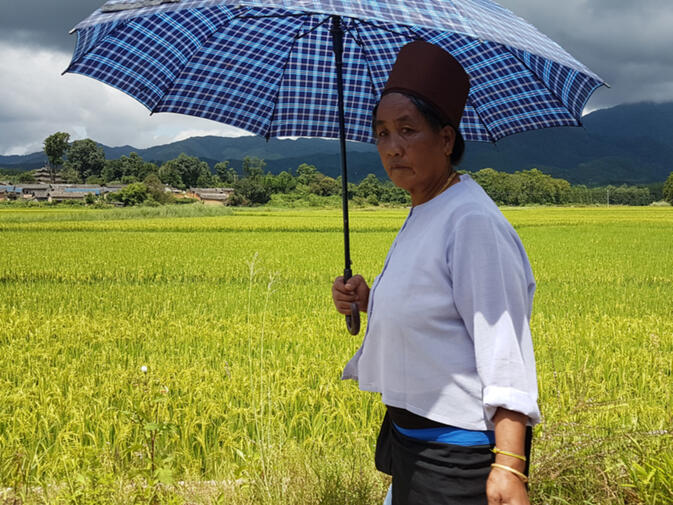 Colin Flahive, co-owner of Salvador's Coffee House and natural food company Dali Bars recently took a business trip to Dehong Prefecture (德宏州). One of the least-visited parts of Yunnan due to a general lack of infrastructure, the area — like many once-inaccessible parts of Yunnan — is undergoing a bit of a construction boom. Flahive's trip centered around a factory producing Dali Bars, but ended up doubling as a comfy tour of the surrounding hills and valleys. 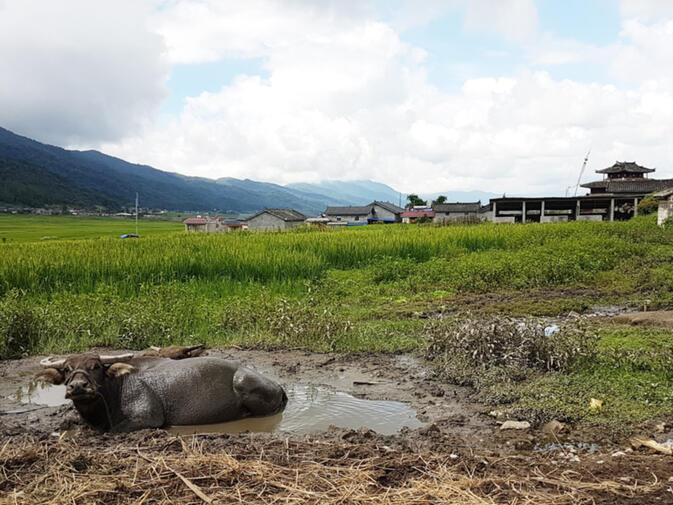 Only about 29,000 Achang live in all of China, making them one of the least populous of the country's 56 official minority groups. The Achang are of Burmese decent and thought to be some of the earliest permanent settlers in western Yunnan. 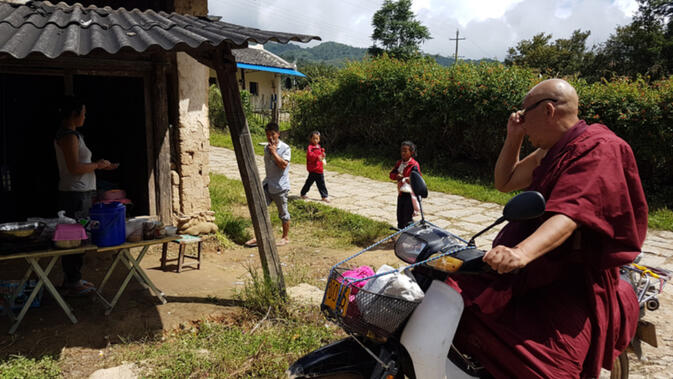 They are predominantly Theravada Buddhists — the most prevalent form of the religion in much of Myanmar, Laos, Thailand and Sri Lanka — and their language, grouped within the Tibeto-Burman family, lacks a written form. 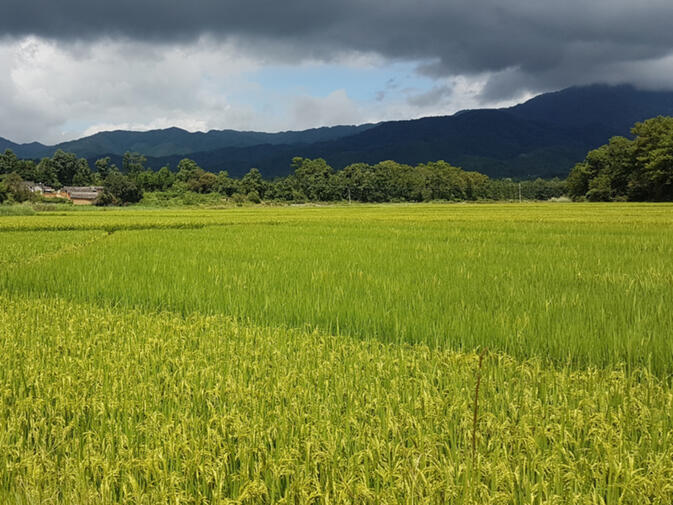 The area around Husa is mountainous, poor and almost entirely agrarian. However, the locals have made a name for themselves as growers of quality cardamom, and also as experts at making handmade rice noodles. Finely-crafted Achang knives — called husadao (户撒刀) — are also quite well-known to collectors across China. 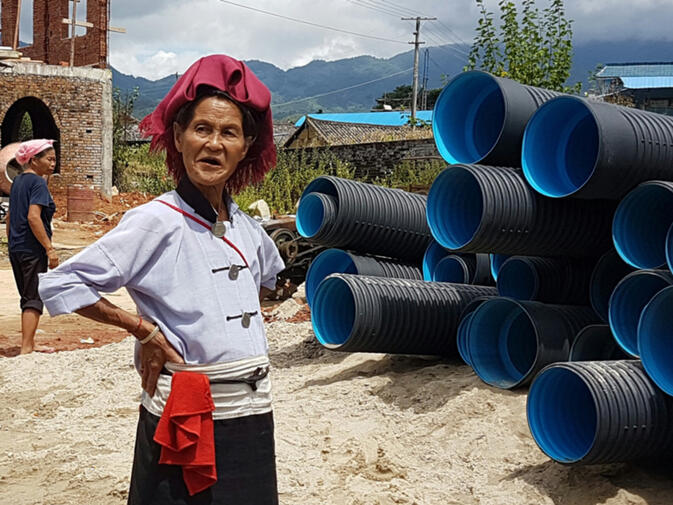 Lisu, Dai and Jingpo villages dot the valley too, but everything seems to be under construction as the new road has brought new wealth and opportunity to this sleepy hamlet. 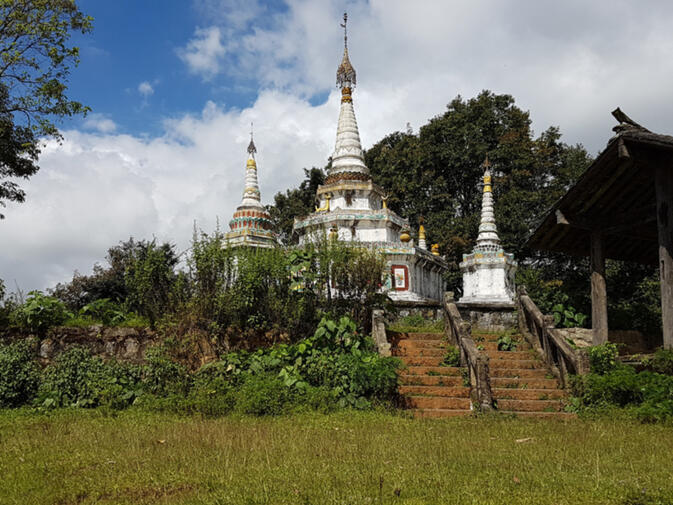 White brick and gold stupas predominate across the Husa region, much like they do just across the border in Myanmar. 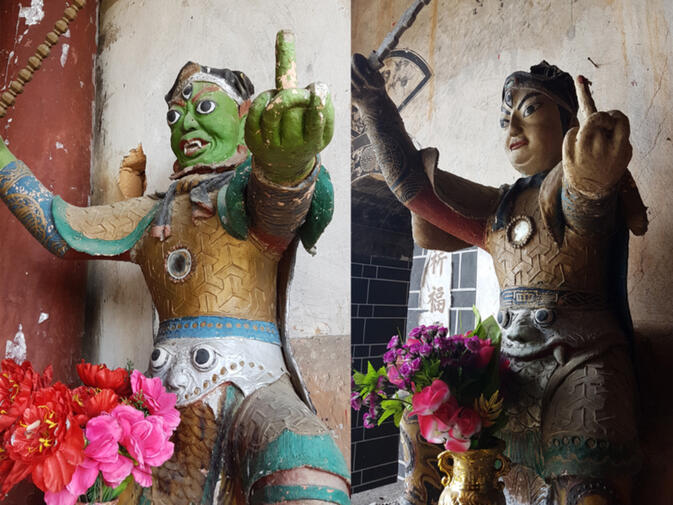 We visited a factory while there, and owner took me for a short day trip to nearby Huangge Temple (皇阁寺). He kept calling the six-hundred year-old structure the "F-U" Temple, which I found very confusing until I met the dour guardian deities at the entrance. "Taking drugs is suicide, selling drugs is murder" is painted on walls along village walkways, a reminder of the lingering cross-border drug problems in the area. I initially went to Husa to oversee the factory's new production line in addition to testing two new Dali Bar flavors. I was surprised to see that ongoing unrest across the border has created a flood of Burmese refugees pouring into Yunnan seeking better lives. I had assumed that the factory owner chose Husa for financial reasons, but after spending a few days there it was clear that it was more a quality of life choice. Clean air, clean water, fertile soil and vibrant local culture turned out to be reason enough. Nice photos. Not quite clear what is meant by "of Burmese descent" - migrated into Yunnan from what is now Burma at some point? Or members of a cultural group that has been in place, on both sides of the modern border, since before the border was established?

The way I understand it is that the Achang language is from the same family as the Burmese language. I think there are more ethnic relations to Burmese as well. But now there is a new migration of Burmese from across the border into Husa.

The article and comments are misleading.

According to Wikipedia, Husa is the least linguistically and culturally intact of all A'Chang areas. "Speaking a distinct dialect, the Husa Achang (戶撒) living in Longchuan County (also in Dehong) consider themselves to be distinct and filed an unsuccessful application in the 1950s as a separate nationality. The Husa were more Sinicized than other Achang. For example, Confucian-styled ancestral memorial tablets are common in Husa homes. Most traditional Husa believe in a mixture of Theravada Buddhism and Taoism."

Much of southern Sichuan and much of Yunnan traditionally speak Tibeto-Burman languages, and this is a linguistic term and not a genetic one. The group includes languages such as Yi (China's and Yunnan's most numerous minority) as well as almost every other Yunnanese minority (Hani, Akha, Lahu, Nusu, Lisu, Sani, etc.). Many of these groups (as well as other minorities in Yunnan, like Tai speakers) have oral histories supporting migrations southwest from southern Sichuan, Guizhou or Guangxi, much of which is now well attested linguistically or genetically.

Even discarding linguistic evidence, given that the major events in Yunnanese history (usually invasions from the northeast: Chinese, Mongols, etc.), regional history (frequent invasions of the Red River delta) and regional prehistory (destruction of the Shu Kingdom of Sichuan during the Han Dynasty, to suggest the A'Chang "came from" or are "descended from" Burma is completely spurious.

From what I have read, more than 90% of Achang live in Longchuan, and a substantial percentage of those are in Husa. But I certainly don't claim to be an Achang specialist and there is scant information available about them. Though it is spurious to say that the the Achang originated geographically from present day Myanmar, they are linguistically Burmish.

Great article Colin. How interesting that Dali Bars are being made in Husa!

I spent a night in Husa in 2011 or 2012 on a bike ride and always remembered it as a very special place, a idyllic pastoral valley tucked in the middle of a high mountain range.

I was lucky that the day I cycled into the valley there was an Achang festival taking place. I remember meeting a monk from Burma who came over to bless the opening of the new temple. He said there was lots of movement back and forth across the border.

My only question is about logistics. Husa is pretty far away from everything. Yet you're making Dali Bars all the way out there and then trucking them into Kunming? I guess with the G56 highway now finishes to Ruili it reduces the time somewhat.

You can pack a lot of Dali Bars in a semi, so don't think trucking the final product is the hard part. Supply chain and labor are the issues in remote area, so hopefully the fresh good taste of Dali Bars will be made partly from Achang grain and fruit.