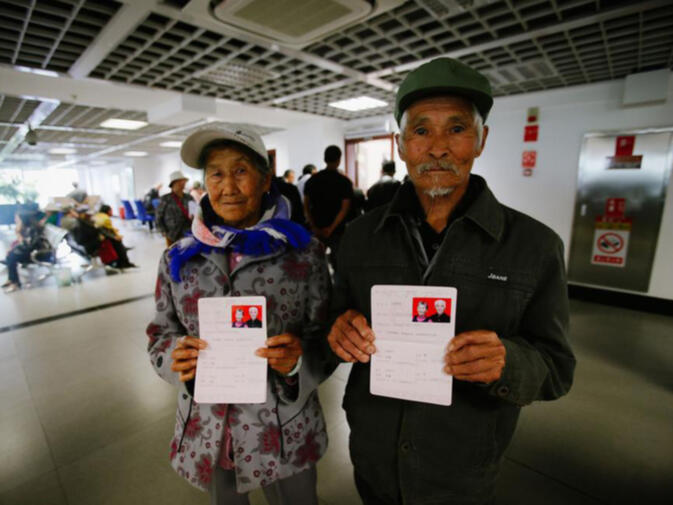 In an ongoing story that is by turns sad and inspiring, a small community outside of Kunming is coping with the reality of modern China in a curious way. In response to a government order to raze their town, nearly every married couple in Yangcao'ao Village (秧草凹村) has filed for divorce over the past week.

Last month, the municipal government of Guandu District announced Yangcao'ao faced imminent demolition to make way for a planned industrial zone near Kunming Changshui International Airport. The 'removal date' was announced May 13, and required all villagers to leave with their belongings in 25 days or less.

Residents were offered compensation packages, which included new — and by official estimates, vastly more valuable — apartments in Chenggong. Similar situations across China sporadically lead to protests, as well as the odd occurrence of nail houses. However, in 300 year-old Yangcao'ao, there was no public outcry or rabble-rousing sit-in. Instead, villagers came up with a land-grab of their own.

If single residents were each to receive a newly built apartment in another part of town — while married couples were limited to one co-owned dwelling — shouldn't a divorced couple be compensated with two homes? This still-unanswered question led first one, and then several dozen other couples to file for divorce. Earlier this week, more than 20 couples, some of them in their 90s, had their marriages dissolved. In one extreme case, a husband and wife whose wedding certificate was lost in a fire 45 years ago, found it necessary to apply for a new document. Upon obtaining the proper registration, they then immediately filed for divorce.

Whether or not this strategy will prove successful remains to be seen. Officials familiar with the situation who were interviewed by The Spring City Evening News remain doubtful, and cite a nebulous legal precedent. "Those couples who separated legally before this rush of divorces began, did not have their hukou [Chinese household registration document] divided. They are not eligible to get two homes, so neither are the new divorcees," said one administrator.

Such declarations aside, people in Yangcao'ao Village continue to file for divorce in the hope of striking it rich, leading some residents to mourn what they characterize as the trashing of a traditional pillar of Chinese society. However, for others, the phenomenon is joked about, even by some who were once married for decades. "Now he can legally find a mistress," mused an elderly woman of her former husband.

Why scatter the villagers?

Nice to know that pragmatic scheming has not died out in China.

It's sad that people throw away 45 years of marriage for a little bit of money. It shows where the value is. Chinese society is so superior. It's 5000 years old ...lol

^Sounds to me like they are sacrificing 45 years of marriage in the name of not getting railed by the powers that be. And not a "little bit of money" but rather most of their net worth.

@Dan
Still,...
They will get houses in the wirst spots of Chenggong, that the real estate company couldn't sell otherwise.
I wouldn't just divorce for a little bit of property.
If you want to protest against those powers, I could of other more effective ways.

But it's a good selling strategy. Showing the real estate or factory owners; "Hey, we only care about money, here cash in our marriage certificate,since we don't value anything. Now give us a second house....See, powerful owners, we are exactly like you."

Does anyone know what the divorce rate in China is? I think it's around 50% in some western countries, much different here?

A little more detail on US divorces: 70% of all first time marriages never end in divorce.

Easier to misjudge this if you are not poor. Anyway, legal marriage certificates are only legal arrangements.

@alien
My grandparents were rather poor. My parents are walking into poverty, after retirement and they would benefit financially from a divorce and still, ...they are not.

I know you must defend everything Chinese, but what does that even mean?
There aren't religious weddings for most Chinese beyond a feast and celebrations, no exchange of vows,etc.
So what's left, after the legal marriage, which by the way is all that defines a Chinese marriage,officially?

Is it justified that they try to milk the rich and powerful? Hell yeah!
Is it still greedy? Hell yeah!

'but what does that even mean?'

It means that marriage goes beyond a piece of paper. The couples are still committed to each other, legal papers being dissolved notwithstanding.

Your parents or grandparents were likely never faced with this dilemma. So please stop using this to get on your soapbox about how China sucks. Wait for another story about kids pooping on long-haul flights or something.

@king
It's greed, you can turn it as much as you want. It's still greed.
So, how are they committed to each other? Their vows? Love? Commitment?
Would you mind to elaborate?

But you know what? I don't even disagree but would you just cancel your marriage for the slim CHANCE of getting a free flat?
What message does it send? How does it feel?
But for me my marriage (and the red book as proof) certificate that comes with it. Means more than a joker card.
But again I am questioning something Chinese so I understand the hatred.

If they wanted to go after more money or better flats, they could go for it as a couple. Better deals have been negotiated plenty of times, without throwing away your marriage.

But greed is greed, so why take the hard road.

dude, these are senior citizens who have stuck together their entire lives through thick and thin. and they will stay together even after the legal issue.

but you insist that them sticking together their entire lives becomes meaningless just because they're trying to figure a way to get around a random legal loophole?

it's not about greed. they will still be together. they're not separating as in they won't call each other anymore because they have a brand new shiny apartment.

@king
You are totally right. 45 years, some of them went. They have seen the darkest parts of Chinese history and survived famines and cultural revolution, without a problem. But the moment they can cash in, there marriage their certificates......- boooooom !!!! They are running to the divorce lawyer.

As I said, as divorced seniors, my parents could make some extra bucks. But they are probably stupid and not loving each other enough, to file for divorce.
I know I am questioning something Chinese, so I understand your frustration and potential hatred. ;)

@king
Oh and yeah my grandparents were never faced with that life shattering dilemma, they were just busy with surviving. So, they were luckier than those old folks in the article. Some people are lucky that they can trade a marriage....lol

sad thing is, those who do not divorce will be ridiculed by those who did. if if if they get two apartments. remember what article said about this.

Also away from the ethic issue (if you think, that there is an issue). It has serious implications, if they get just one flat, ownership, inheritance, banking, general ownership of land, ....there is plenty of stuff, that needs to be thought and taken care off.

If they get lucky and get 2 flats, lucky them. But if not, well... I guess they could just marry again. Still not bad, throwing a big wedding party at an old timers age. lol