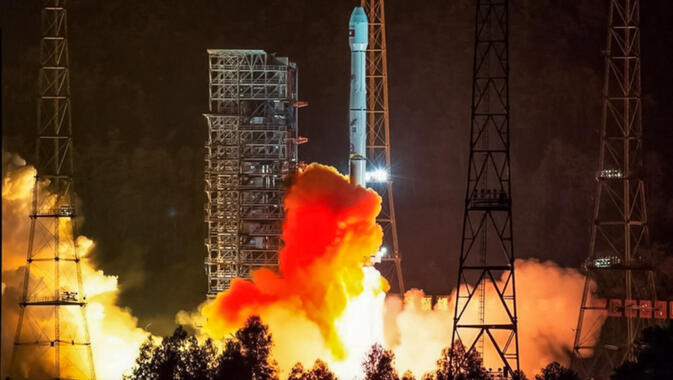 This past Saturday, just past midnight Beijing time, Laos launched its first telecommunications satellite, LaoSat 1. The take off, however, did not occur in Laos, but rather from a launchpad in Sichuan, as China's participation in the venture has been critical throughout. In addition to providing the facility — because Laos does not possess an aerospace industry of its own — the Chinese government also contributed the necessary technology for both design and development of the spacecraft.

In 2006, Laos tentatively began developing a potential satellite project, but did not do so in earnest until a suitable orbital slot became available three years later. Even after securing a position for the planned geosynchronous satellite, the need for investment capital loomed large. Laos has an annual GDP equivalent to US$11.77 billion, placing the landlocked nation's economy below those of all its geographic neighbors. As such, the space undertaking was deemed unaffordable and delayed until such time that outside funds could be secured. It was at this point Beijing stepped in, offering both financial and technological assistance.

Once an agreement was reached, the Export-Import Bank of China — or China Exim Bank — provided US$259 million in loans in exchange for a majority ownership stake in the final product. The bilateral agreement, published in a joint-press release following the launch, allocated 45 percent to the Laos government, with the controlling share going to a consortium of Chinese-owned companies. By securing a controlling stake of 55 percent, the Chinese government has likely ensured a long-term return on its investment via corporate and consumer licensing fees.

This is not an unusual action on the part of China Exim Bank. Established in 1994 and subordinate to the country's State Council, the institution is one of three major Chinese financial institutions designed "to implement state policies in industry, foreign trade, diplomacy, econom[ics], and provide financial support so as to promote the export of Chinese products and services." In this case, the bank has provided financial support in order to promote the export of telecommunications technology to its southern neighbor while also publicizing its space program.

Both the Laos and Chinese sides of the venture expressed pride in what they achieved, framing the cooperative effort in terms of future benefits to the people of Laos. In an announcement published by the state-owned Lao News Agency, Minister of Post and Telecommunications, Hiem Phommachanh, said:

LaoSat 1 will be very beneficial to our country because the majority of our country is mountainous. [It] will be used for many purposes, including distance education and medicine, telecommunications and internet links, as well as facilitating anti-disaster efforts.

Currently Laos can only use satellites rented from other countries. Now it has its own. People can enjoy more diversified TV programs. [Also], many mountainous areas in north Laos have no communication connections like this. With this new satellite, people living in the mountains can have a better understanding of the outside world.

Is this the best way to invest in the future of the people of Laos?

Right. But I wonder if there are other choices.