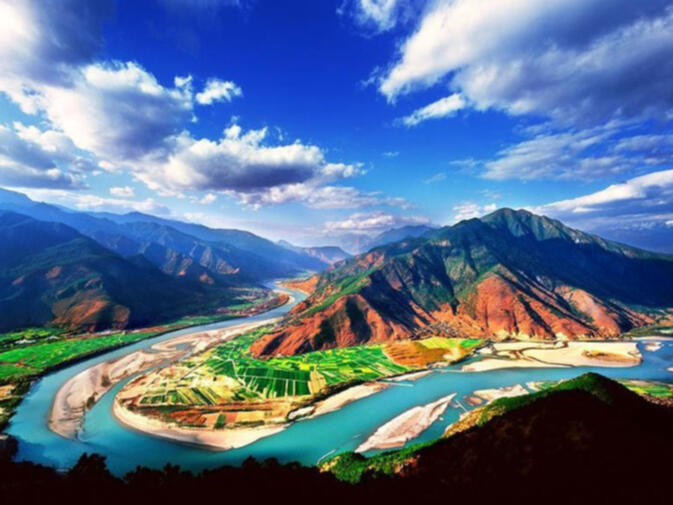 Although not on the scale of the Grand Canal or the Three Gorges Dam, the waterways of Yunnan province are undergoing radical changes. This is especially true in the Three Parallel Rivers Protected Areas. In the name of "development" and "drought prevention", a new project launched in the province will divert a stunning quantity of water away from the headwaters of the world's fourth longest river.

Dignitaries and officials attended groundbreaking ceremonies for the Dian Zhong Water Diversion Project (滇中引水工程) on September 30 in Lijiang. Attendees oversaw the initial launch of a program that will divert an estimated 3.403 billion cubic meters of water annually away from the upper reaches of the Yangtze — known as the Jinsha River (金沙江). The ceremony was overseen by Provincial Party Secretary Li Jiheng (李纪恒), while a similar event was held simultaneously in Dali.

The water in question will be funneled southeast through naturally occurring rivers and lakes, first passing near the cities of Dali and Chuxiong before reaching Kunming, Yuxi and Honghe. The intended goals of the project include providing more water for municipal, agricultural and industrial use during times of drought. Of added benefit, according to local media reports, will be the influx of clean water into several lakes suffering from major environmental degradation. 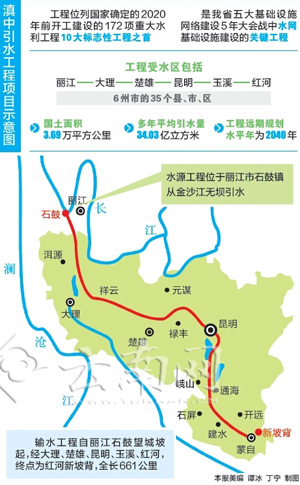 Even though Yunnan as a whole is rich in water resources, the middle of the province is periodically crippled by drought. It is hoped by officials the Dian Zhong Water Diversion Project may avert future water shortages such as the five-year dry-spell between 2009 and 2014 that threatened millions of people and led to billions in lost revenue.

Lakes affected include Kunming's Dianchi (滇池), Qilu (杞麓湖) near the city of Yuxi, and Yilong (异龙湖) in Honghe Prefecture. Dianchi in particular is an environmental nightmare, and for more than a decade has been covered in a thick, green film of algae rendering it's waters useless even for industrial use.

The provincial government has repeatedly thrown large sums of money at various Dianchi clean-up and "rehabilitation" efforts. Over the years such measures have included the introduction of invasive plant species, efforts to oxygenate the lake, and the construction of water treatment plants along tributary rivers and streams. Nothing has yet showed substantial success.

Two years ago, then-Provincial Party Secretary Qin Guangrong (秦光荣) outlined a new plan for Dianchi, one that would effectively "flush the lake clean" of pollutants and algae with water from the province's northwest. The Dian Zhong Water Diversion Project appears to be based largely on Qin's vision, although with a heavily modified and enlarged scope.

The project begins in Shigu (石鼓) — known in China as 'the first bend in the Yangtze'. From there, an amount of water equivalent to 1,360,000 Olympic-sized swimming pools will be diverted away from the Jinsha River through man-made canals and underground pipelines connected to existing waterways, including the lakes mentioned previously.

Work on the 661-kilometer endeavor — which will not include the construction of any new dams — is expected to take eight years, with "long-term goals" realized by 2040. No cost estimates have yet been made public. Speaking at the ground-breaking ceremony held last month, Yunnan's acting governor Chen Hao (陈豪), said "This is an exciting time, a time of dreams."

What is this supposed to do to the present flow of the Yantze?

Chilling to see that people who first create a drought by disrespecting fragile ecosystems, even strengthen their contempt for the natural world to come up with this callous plan. It's utterly depressing to see such an interesting piece of the world to be at the hands of such shallow and delusional lunatics. Big chance they are going to strand with this insane plan, but the whole notion of them actually coming up with this instead of only starting to acknowledge the root of the problem deprives me of any remaining hope. It is an indeed an exciting time, a time of nightmares.

In Chinese history and culture theres this unique sensitivity to nature. But that is in the past time. This sensitivity doesnt exist anymore, except in the verses of a handful calligraphers. Even Xishuangbanna is full of plastic flowers and plastic trees. People are more alienated than ever. Only Wechat left.

I am sure the countries to the south are especially excited with this plan. Lets see what happens to the Mekong.

How sad. This will screw up the upper Yangtze from just before Tiger Leaping Gorge, and probably the lower Red River as well. What a shame. Hot on the heels of the Cizhong announcement regarding the upper Mekong, it looks like they're practically buggering these great rivers up all the way to their headwaters.

What fools to think they can "flush out" Dianchi. It is as if, forced to live with the effects of Kunming's pollution, they have hatched a half-baked scheme to shoulder the problem on to others.

老子 wrote in 道德经 Of the need for harmony with the Dao. When I read, and tried to understand Daoism, I thought that the teaching was that man needed to be one with what is. I thought this idea was simple, complex and profound. I thought it might mean being in harmony with nature.

China may claim the 道德经 and Daoism as the Way but over the centuries she has often attempted to improve nature for the benefit of man. The ability to muster resources, manpower and fortune, to carve out solutions to perceived problems of mankind is to fail to see the Dao. Damming rivers, leveling mountains, and diverting waters to far off places is not harmonious. When man defies the Dao, balance is no longer maintained.

When balance is destroyed, man will suffer. That is the Dao.

Hey, look, I think it looks dodgy too, but are there any actual studies by people who know as to what the effects of this thing are likely to be?

@Geezer: I think all species disrupt the former balance of nature, and it's difficult to figure out what such a balance might ever have been, or ever could be. Humanity has done this faster than other species, and to a greater extent, thanks to the idea of progress. I'm not attacking or defending progress here, just trying to figure out what the word refers to, or could/should refer to. The idea of the Dao is fine, but it's not very specific.

The fact still remains, (almost) nobody knows for sure how polluted the environment actually is. Maybe only Yangtze can help here. Theres this mountain near Shigu that is called the most important mountain in China. Maybe bore a small hole there.

We are far, far beyond the point where we can return to not affecting nature, as long as humans exist, nature cannot, provided that we are using the definition of nature as non man-made. The entire surface of the planet is the way it is because of humans. The only unoccupied areas are the polar ice caps, but they too are changing as a result of man made global warming. All we can do is manage it as best we can (which we are not doing yet, not even close).

Agree with Haali. Perhaps the major problem with managing 'nature' is our inability to manage ourselves, if we can't figure that out we'll be another species that evolution, 'naturally', will put on the scrap heap - but perhaps more interesting than most as, for example, the dinosaurs didn't go down the tubes simply because they couldn't get along with each other. If that happens, then whatever is left of 'nature' will struggle along as it has in the past, with whatever f*cked-up resources we leave to it.
Winter Is Coming - maybe.

Just wonder what types of pollution are hidden in the lake bed which might be dragged to other parts of Yunnan. Hopefully are not going to compound the problems.