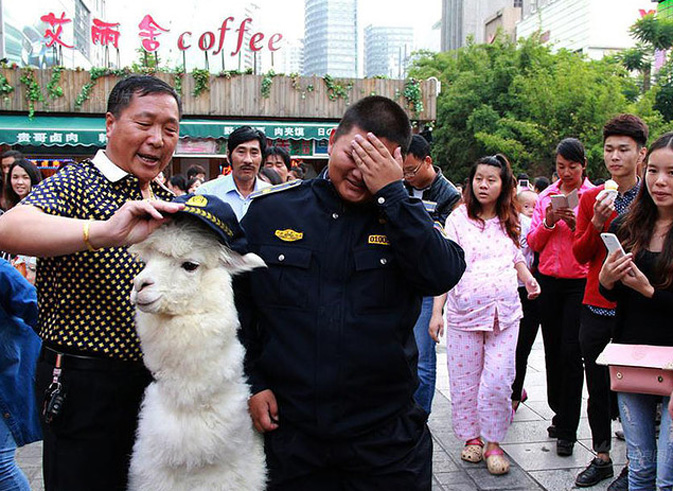 Nanping Square is a bustling retail area in the heart of Kunming known for its upscale shopping, luxury entertainment and, as of recently, an alpaca. On the afternoon of July 28, a man surnamed Fang paraded his woolly pet — a small relative of the llama — around the busy commercial plaza. The bewildered animal wore a sign hung around its neck stating "Lost a fortune in the stock market, mythical creature for sale".

Large crowds gathered around the man, who declared he was selling his beloved companion for 100,000 yuan in response to losing his shirt during the stock market's recent fluctuations. Fang explained he originally bought the alpaca two years ago and imported it from New Zealand — an endeavor costing him the same amount he now hopes to recoup from selling the animal. He admitted his situation was regrettable, saying because he "raised the alpaca from infancy, we now regard him as part of the family."

Seeing the prized pet go will not be easy, Fang admitted, but after receiving his daughter's first college tuition bill, he believes he has no other choice. The hapless investor told bystanders he had already mortgaged his house and car, but it was not enough. The alpaca, he explained, is his last major asset. Although a cherished family-member, Fang confessed that the 56 yuan needed daily to properly feed the growing animal has also left an increasingly large hole in his wallet.

Despite the hefty selling price, the hopeful Fang argued that alpacas make for loyal and well-behaved pets. Because of its docile nature, Fang's alpaca was the center of attention for both curious children and their confused parents. One excited onlooker told reporters "My kids have always wanted an alpaca. If it's the right price, we may even take it home tonight." However, after consulting with Fang, he sadly confessed that "the asking price is a bit too high for just a pet." Later in the afternoon, police politely escorted Fang and his companion out of the square. No buyer was found.

Fang first moved to Kunming ten years ago from Shaanxi province. After amassing a small fortune that included investments in stocks, Fang experienced firsthand the brunt of this summer's economic upheavals. In Yunnan, this has included the suspension of trading on the world's largest rare metal brokerage, the Kunming Fanya Non-ferrous Metal Exchange. Investors, unable to sell futures options worth billions, threatened legal action and protested in the street.

Many Chinese netizens also see Fang's recent alpaca stunt as a similar, if more subtle, form of protest. His use of the term 'mythical creature' is thought by many to be an allusion to a list of imaginary beasts posted six years ago in an online Chinese encyclopedia. The list included the now-infamous 'grass mud horse' (草泥马), an invented term for alpaca which, when pronounced with diferent tones, is a caustic epithet involving mothers, and has since become a way to express frustration with censorship.

While Fang's intentions to raise capital by selling his beloved alpaca may be genuine, the manner in which he has done it, for many observers, represents a form of protest against recent government interventions in the economy, albeit subtly and in a quintessentially Chinese manner. 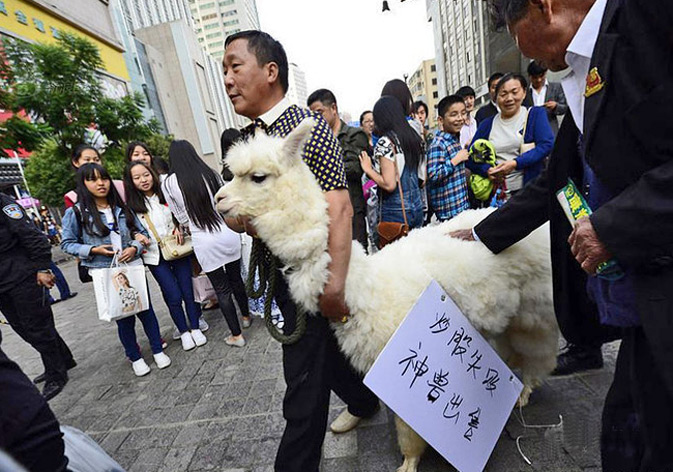 Great photo. Nice to see guards have a sense of humor.

Probably he got cheated on the slpaca, too. They are normal farm animals in Peru & can eat anything a yak can. The wool is a commercial commodity.