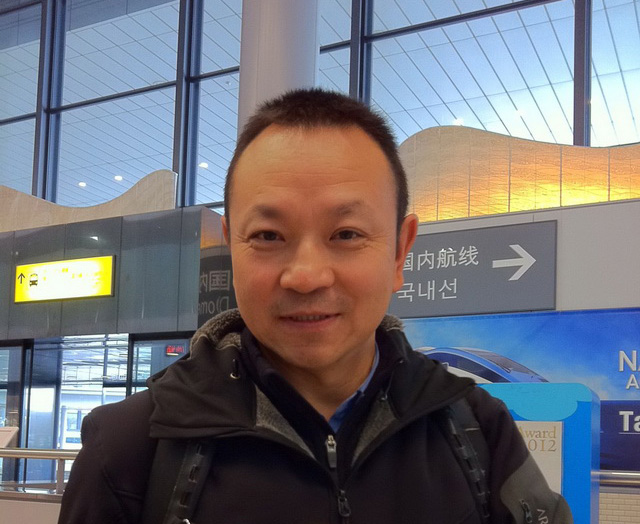 He may not be the most fit or fastest marathoner, or the most technically proficient mountain climber. But when Jin Feibao (金飞豹) — China's "greatest outdoorsman" — sets his mind to some daunting new task, he gets it done. His newest venture is a bicycling trip across the continental United States during which he will act as Kunming's unofficial ambassador while promoting fitness and "a low carbon lifestyle".

Jin's journey begins June 3, in Plymouth, Massachusetts and is planned to end sixty days later in Los Angeles. Over the course of the 5,800-kilometer trip, Jin will pass through more than a dozen states. When he reaches Chicago, the 51 year-old Yunnan native will hook up with Route 66 — one of the country's first major highways — and follow it until he reaches California.

Joining Jin are six others, including his brother, Jin Feibiao (金飞彪), and Kunming transplant Jesse Millet, who will help with language interpretation and navigation through his strange native country. The goal of their journey is to deliver "letters of friendship" from Kunming mayor Li Wenrong (李文荣) to his counterparts in the American cities through which Jin and company cycle.

Promoting fitness and a love of the outdoors have long been passions of Jin, and his exploits are calculated as much for fame as they are to inspire young people to get outside and try new things. However, the target audience may be changing as he and his friends age. Before departing for the US, 66 year-old team member Fei Xuan (费宣) rather poignantly told reporters he hopes the trip will inspire older people as well:

In this world, there are some people who feel pressure because they choose to live a little differently and have their own dreams. Maybe they cannot succeed quickly, or maybe they will never realize their dreams. But they are brave enough and believe in themselves and continue dreaming. [They] are still dreaming great dreams even though they are no longer young.

Apart from encouraging people to experience new adventures, both China and the United States may indeed welcome news and updates of Jin's travels. The two world powers are currently feuding over the South China Sea in a quarrel that has led to some bombastic statements by representatives of both sides. Jin's quiet form of citizen bridge-building may provide a welcome reprieve.

The overall plan and purpose of Jin's US road trip mirrors another of his undertakings four years ago. At that time he rode his bicycle from Kunming to Singapore delivering similar friendship letters. That trip was significantly longer than the planned US undertaking, spanning 74 days and nearly 6,300 kilometers.

Jin has made his name and promoted fitness in China over the past decade through a series of well-publicized and grueling feats. In an 18-month period spanning 2006 and 2007, he completed the Explorers Grand Slam by summiting the tallest peak on every continent and reaching both poles. He has also jogged across the Gobi Desert, made a crossing of Greenland and hiked west to east through the Sahara Desert.

We at GoKunming wish him, Millet and the rest of their companions a safe and successful trip across the US. 一路平安!

Closing in on the North Pole

This guy never stops - kudos to him. But I always wonder who finances his trips & expeditions.

Government and corporate sponsors. I've even seen him on an ad on the side of a bus before.