Kunming to Vietnam border by rail soon to be reality 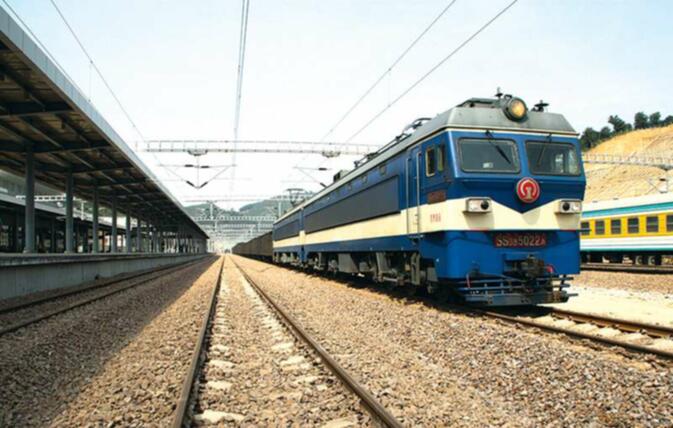 Yunnan's newest railroad opened this week to test traffic, indicating work is all but finished following more than five years of slow and steady construction. Although more of an extension than a dedicated line, the Mengzi-Hekou Railway Line (蒙河铁路) will soon allow freight and passenger traffic from Kunming to travel uninterrupted to an international border.

The new section of track runs for 142 kilometers through Honghe Hani and Yi Autonomous Prefecture and connects the city of Mengzi (蒙自) to Hekou (河口) and its busy border crossing. Passengers on this line can expect a one-way trip in either direction to last roughly 90 minutes and speeds on the few straight stretches to reach 100 kilometers per hour.

The line completes almost six years of construction aimed at connecting Kunming to Hekou by rail. When passenger tickets go on sale —presumably before the new year — travelers will be able to ride from Kunming to the Vietnam border in six and a half hours. In the future, the modern railway is expected enhance tourism and commerce in southern Yunnan and one day extend all the way to Hanoi.

The railway linking the Spring City to one of the province's most important and lucrative border towns has cost an estimated 6.93 billion yuan (US$1.12 billion) since construction began in 2009. Unlike many of the giant and costly infrastructure projects currently underway in Yunnan, the Mengzi-Hekou project appears to have beaten a 2016 deadline by more than a year.

Part of a much larger endeavor, the Mengzi-Hekou section is simply one step towards the slow realization of China's plan to connect Kunming by rail with Southeast Asian capitals. Known as the Trans-Asian Railway (泛亚铁路), the scheme involves high-speed trunk lines heading to Hanoi as well as the Kunming-Laos-Thailand Line and the Kunming-Ruili-Myanmar Line.

Those plans will not be completely realized for years to come, as exemplified by the state of railways in northern Vietnam. Hekou sits across the Honghe River from the Vietnamese city of Lào Cai, which does indeed have railway service to Hanoi. However, those tracks are narrow gauge, built more than a century ago, and are completely incompatible with more modern trains traveling inside China.

How many hard seats tickets sold for a payback on 7 billion yuan?

They will make the money on freight services.

Kunming to the Vietnam border in six and a half hours - Not bad. Looking forward to making this trip.

Depends on where the Hekou station is. Could be an hour from town/border. For instance, the Mengzi station is no where near town. Although much less thievery on a night train vs night bus.

Mengzi North is far away, but Mengzi central was I believe rather close to the centre. Hekou shouldn't be too far away either although you'd probably still need a taxi to the border.

Anyway, given that the first train to Hekou leaves at 7:53, add 6:30 hours, that's arrival at 14:27, gives you enough time to speed to the border, get your Vietnam visa as per my instructions (www.worldofnonging.com/[...] hop over the border, catch a bus on the new highway and you could be in Hanoi by 10pm if you do it right.

I'm sure thievery sometimes happens on buses and trains, but I can't remember of hearing of any incidents of such in Yunnan, and I've ridden a lot of buses and trains here. Take common sense measures and I doubt if you'll have problems.

Our own forums have reports of the Hekou night bus being rife with thieves.

Given how China works, I bet you arrive at new Hekou West station that is 20km from town.

Hekou West sounds like it couldn't be far from town. As Vietnam borders the town on the west.

I would be interested to know:
- is there a direct bus from this train station to Sapa? if yes, how long is the ride? day? overnight?

No there isn't. You'd have to cross the border by yourself and then you can get a bus to Sapa. There are many options from official buses to mianbaoche equivalents. The ride is about 30 km up a hill so I'm guessing anything between 30 min and 1 hr to get to Sa Pa.

thx bluppfisk. that's good news. thought it would be much longer.

Given how China works, a Hekou West could be 35km to the north west instead. Just so people don't get confused reading, there is NO Hekou West station that I know of. Just made it up as an example of how that new extension line could drop you off in middle of nowhere, like Mengzi North (which is real).

For Sapa transportation, if you can find anything for 50k to 80k dong per person after the border, take it. Otherwise you have to figure out how to get to Lao Cai bus station. Also, rides are a daytime thing, not that you'd want to head up that road at night anyways.

The Lao Cai bus station is a 45-minute walk (I think that's about right) from the border - I've done it both ways, but it was some time ago, don't exactly remember how long it took me.

First person to go there please let us all know how far the train station is from the border crossing.

Hmmm I can already smell the... ... cigarrete smoke in the trains.

Smoking areas on trains are confined to the passages between the cars. I've had lots of experience on Chinese trains (2nd-class sleepers, mostly) and have found that people almost always respect this rule, at least these days. Hope you can handle it.

Nasty smokers always fill the most ventilated areas with smoke then it blows into where I am trying to sleep. Cant wait till they bring in the death penalty for all smokers.

"Cant wait till they bring in the death penalty for all smokers."

do you think it's appropriate to have so much hostility towards other human beings?

Just the smokers - all other human beings are OK - I take it it you are one of those smokers.

i smoked for a while, then quit. it's nasty stuff. but at the same time has a calming effect. if there was a cigarette that wasn't filled with nasty chemicals, i would smoke.

in china, i accept the occasional smoke. the part where it's forced on people in social occasions is where it starts to get unethical. second hand smoke is annoying, but i'm not sure it's linked to cancer as they claim.

Have you tried the Elect cigarettes? How is that for a smoker? Does it have the same effect as a real cig? My guess is that they work, that is why the tobacco industry quickly outlawed them.

i think i read that elec cigs are just as bad or worse, but not sure. anyway, there's always conflicting reports about everything.

so my opinion on smoking is that more research needs to be done and if tobacco is healthy, put it in the hands of tobacco farmers and take it away from mega-corporations that add poison.

www.sott.net/article/221013-Health-Benefits-of-Smoking-Tobacco
A series of very interesting studies from multiple academic sources confirms that the risk of Parkinson's disease and Alzheimer's disease is surprisingly higher in non-smokers than in smokers.

more research needs to be done and if tobacco is healthy - I guess you need to watch the movie Thank You For Smoking.

"In the future, the modern railway is expected enhance tourism and commerce in southern Yunnan and one day extend all the way to Hanoi."

umm excuse me there is already a railway from Lao Cai to Hanoi that has been in operation for decades. Please get your facts straight. The only "missing link" per se would be like a 3 km stretch from Hekou to Lao Cai by train, but that's no big deal as you can just walk across the border and then catch a taxi to the Lao Cai train station as is currently the case.

@bluppfisk, the only way you can reach Hanoi in like 5 hours from Hekou is if the new expressway is currently finished and a bus service that takes this expressway is already in operation. Alternatively, you could take a private car or taxi, but that might be a little expensive unless you share with other travellers.

Currently the train to Hanoi takes around 8 hours and the road journey by car also took 8 hours on the old road, so probably 9-10 by bus.

As I have not heard anything to suggest that the whole expressway has opened to traffic yet (if it has, please provide a source) and only some sections near Hanoi have opened, my best guess is 6-7 hours using a combination of the old and the new road.

The new expressway is open and buses are on it. Source: all Vietnamese I know confirm.

@Tom69: the author does have his facts straight - the current railway does not stretch all the way to Hanoi in a way that would enhance tourism.

The reason being that 1) as you mentioned, you cannot continue after Hekou on the same rail because only the old railway crosses the border and of course no trains go across that border anymore.

2) the train on the VN side is narrow-gauge, meaning that it effectively takes 9 or more hours to get from Lao Cai to Hanoi, which is simply unacceptable. Most people who have limited time choose the bus.

I'm at the Hekou train station now. It's about 4-7km outside of town and nobody in town knows where it is except taxi drivers perhaps. For further inconvenience, it's not listed on baidu maps. The hotel I stayed at last night 河口国际公寓 has a ticket service and a shuttle bus. This hotel is right next to the border crossing.

Starting March 20, there will be a night train to Hekou: