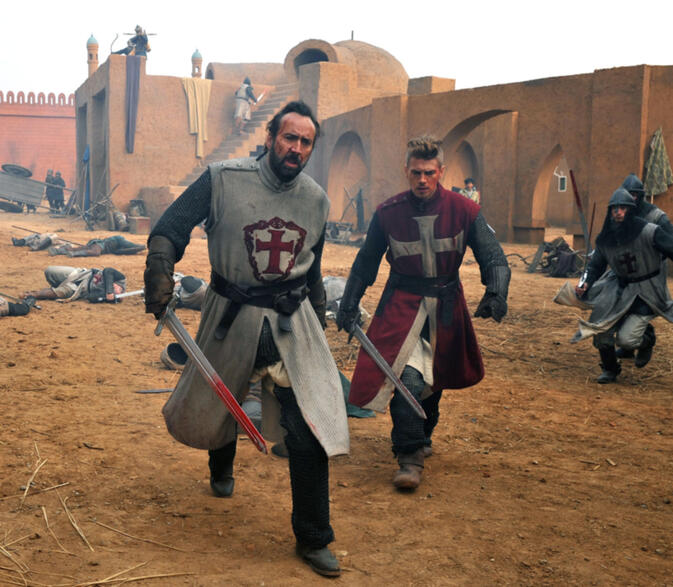 Although his star may have faded significantly in the West over the past decade, by all accounts movie star Nicholas Cage is huge in China. A Yunnan studio action film shot specifically to capitalize on that popularity was abruptly shelved in October amidst much rumor and confusion. The motion picture has now been resurrected, and both Chinese and international audiences will soon have the opportunity to see Cage frolicking about during the Song Dynasty.

In Outcast, the male leads play twelfth-century European crusaders who somehow end up in China. There, according to trade magazine Variety, they "find redemption" while aiding a prince marked for assassination. The 50 year-old Cage's character has been described somewhat confusingly in press releases as a "Crusader-turned-bandit".

The film marks the directorial debut of Nick Powell, a former stunt and action-sequence choreographer. Shot on-location in Beijing and undisclosed parts of Yunnan, the movie is expected to do well enough at the Chinese box office that a sequel has already been approved. Its predicted success hinges on several factors, including Outcast's bilingual script. Perhaps the most important marketing ploy, however, is Cage's mere presence on screen. He was named Best Global Actor at a China's popular Huading Awards (华鼎奖) in 2013.

Originally scheduled for release earlier this year, Cage's newest vehicle will now hit Chinese cinemas in January 2015 and international markets the following month. No word has yet been given as to why the movie's Chinese release was completely scuttled in October. Two hours before its national opening, with its main actors gathered together in Beijing for a premier and Outcast set to play at tens of thousands of theaters across the country, all screenings were unexpectedly cancelled.

Hollywood speculation as to why this happened has focused on the company funding the movie — Yunnan Film Group — perhaps being unable to get the epic's ferocious 3D battle sequences past Chinese censors. Others maintain the film's 26 percent share of available theaters was deemed too small a grand opening by Outcast's financial backers.

Whatever the holdup, the film, which is at least Cage's thirtieth of the past decade, has been cleared for commercial release. Moviegoers now have only a short time to wait and see if the incredibly entertaining thought of Nic Cage speaking Chinese comes true.

When I saw the preview for this I thought "This has a 90% chance of being unwatchable". Now that it's been sent back for re-editing by (likely) the Chinese government, I revise my estimate to 99%.

Almost definite suckitude on an epic scale! Why didn't Nicky come say 'hi' to us?

You will have to wait until you can see it uncut and unedited from the torrents.

For those of you who don't know, there is a reason for Nicholas Cage to be taking the quantity-over-quality approach to his films. He got into some extremely serious tax debt in the U.S.. I forget the exact amount, but it was in the tens, or hundreds of millions of dollars. For that reason, he supposedly made over 30 films in the past 18 months, including a schload of foreign films. The ironic thing is that the foreign film makers tend to pay him proportionately much more than Western film makers.

But, if you were wondering why such a truly talent actor is making such schlock now, there's your reason. I only hope that when this debt is paid off, he will still have a career.

刘亦菲
Sure she made Nic wish he was 30 years younger.

for all you diehard nic cage fans, there's a google chrome app called nCage that changes all images to his holiness.

nic cage as always managed to mix some seriously good acting with some seriosly bad film choices. seems to be one good film for every two bad ones. always has been. national treasure anyone? nah!

I downloaded the movie just now and will watch it this evening.

I saw the movie today half way. It was boring and predictable. Not worth watching.