By Patrick Scally in Features on December 11, 2014 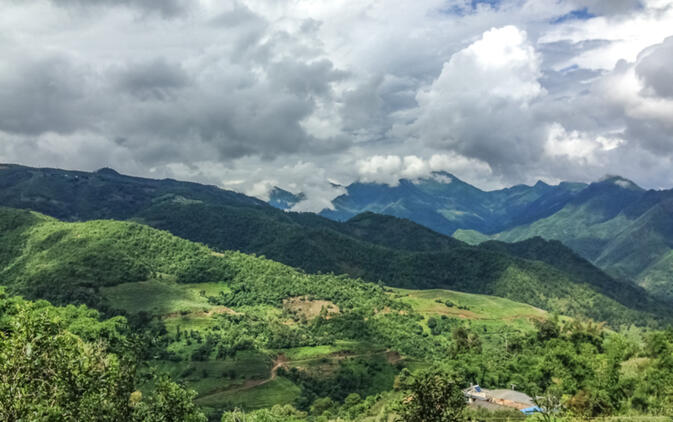 For almost three weeks I stayed with a local family in a small hillside village in Bangdong (邦东). I lived with three people, who I called ayi (auntie), shushu (uncle) and gege (older brother). Like many families in the village, they harvested, dried and sold tea leaves, while also taking care of a herd of cows and goats and a few beehives. I stayed in a room that was still under construction, possibly intended for future tea storage. It had walls of wood and metal, a hole where a window would later be installed, and a makeshift bed made of plywood and cardboard where I fell asleep every night to the ringing of cowbells and the chirping of crickets.

Every morning shushu would open the pens and drive the animals out towards far-off pastures with whacks from a stick and his distinctive yelps. In the evening these yelps and the sound of bells would signal his return, after which he would spend the night smoking his great big water pipe. The changing health of the animals was a constant task for my family. In the time that I was there, a cow was treated by a local veterinarian, several goats were periodically sprayed with some white frothy medicine, a few animals had blood samples taken by local officials and one goat broke its leg and stayed limping around the house during the day.

At times when I was free to spend the entire day with my host family, I travelled off with ayi and several neighbors to the distant tea fields. I tried my best to observe and figure out which of the bright green leaves and buds were worth picking, slowly filling my basket as ayi and her companions sped through rows of tea, filling baskets and sacks, talking and laughing all the way. 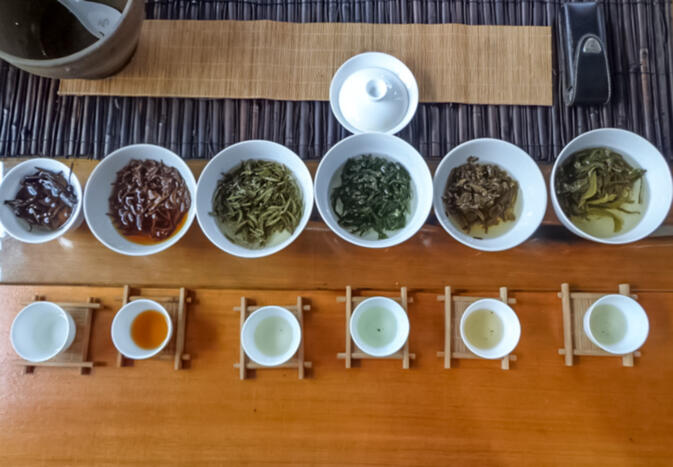 A sampling of teas from Bangdong

Communication between me and the family was hampered by my beginner-level Mandarin and the uniqueness of the local dialect. Every small conversation I was able to have was a tiny victory. While I was unable to grasp anything but the tiniest nuggets of information from ayi's long story of her family history, I am proud to say that I understood when shushu explained that he managed a total of 12 cows and 21 goats.

Even in the short time that I stayed with this family, I witnessed big changes. Near the beginning of my stay, while ayi used a spoon to scrape apart an apple to eat, she pointed out that she had lost all of her teeth. Several days later, to my surprise, she showed up with a mouth full of pearly-white false teeth. This changed her face and voice just enough that I doubted that she was the same woman until I heard her unchanged and distinctive laugh.

At the beginning of my stay, the path to the solar-heated shower involved a suspicious-looking ladder dropping down several feet, but by the end of my stay, gege had finished welding together a staircase. Gege was a rural genius of tools and machinery, always managing to hack something together as soon as it was needed — once fixing the house's circuit breakers just in time for them to save the electronics from a lightning storm. 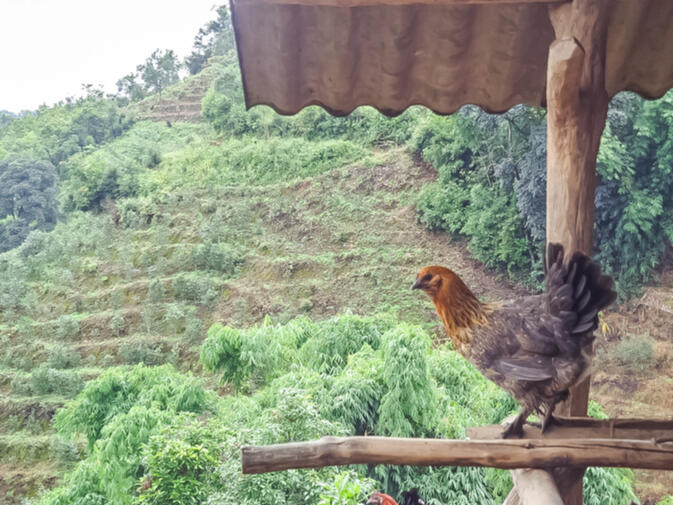 There was an ongoing battle to keep the chickens out of the general living area of the family's courtyard. Someone had to remember to keep the chicken net strung across the boundary of the yard, pinned high and without weak points, or else the chickens would find a way to make a mess of things. One day a few chickens wandered in through a door left open, and I subsequently found myself tasked with getting them out. I walked into a small, dark room, tightly clenching a broom as my only defense, and eventually managed to chase the fury of flapping wings back outside.

The second-to-last day I spent in Bangdong began, like many days, with an incredible rainstorm. Within a span of minutes, a little drizzle turned into a downpour, quickly overwhelming the drainage system of our house and turning the courtyard into a small pool of muddy water. This caused a few tea seedlings to break free of my family's pile and wash down the mountain. The ever-changing weather above the hills lining the Lancang River spent the rest of the morning alternating between the thickest fog I have ever seen and clear skies providing a view of the shrouded valleys below.

In the evening, after my family's dinner of noodles, pickled vegetables, spices and rice, I decided to take a walk around the village. Strolling back, I saw a cluster of villagers sitting and chatting around a pile of tea seeds in the middle of the public basketball court. Here, with construction materials providing makeshift chairs, a scene of village comity unfolded and I wanted to try to join before I would lose the chance — this despite my own very limited Chinese language abilities. 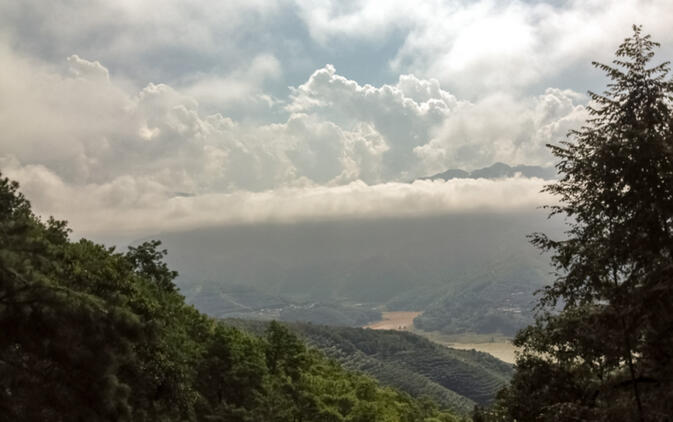 I approached the pile of tea seeds, and did my best to pronounce the word for them, chazi. The murmurings of the villagers suggested that, indeed, these were tea seeds. One told me to sit, and so I did, joining the evening chitchat. They talked up each other and passing motorbikes, and I was able to answer some fraction of questions they asked me — such as my age, country of origin, and whether I had eaten yet. One person asked to try on my glasses. They gossiped and laughed as the day began its slow end and the sky turned from blue to dark blue to black.

As it began to be about time for me to return home, I noticed a white-haired man walk into my family's home carrying a small axe and a carpenter's square. I returned later to find him and my family chatting and drinking. The dinner table had been carefully laid out with incense, the axe and carpenter's square, tea, rice, and a large bowl filled with a plucked chicken. I talked with the apparent relative or family friend, making a breakthrough in my language adventure when I was able to answer his questions about my family back in the United States.

Soon, gege asked if I wanted to watch television. I didn't particularly want to, but, not wanting to miss out on any bonding with my home stay family in the last few days, I headed over to the living room. When I realized that nobody was joining me, I peeked back outside to see what was happening. 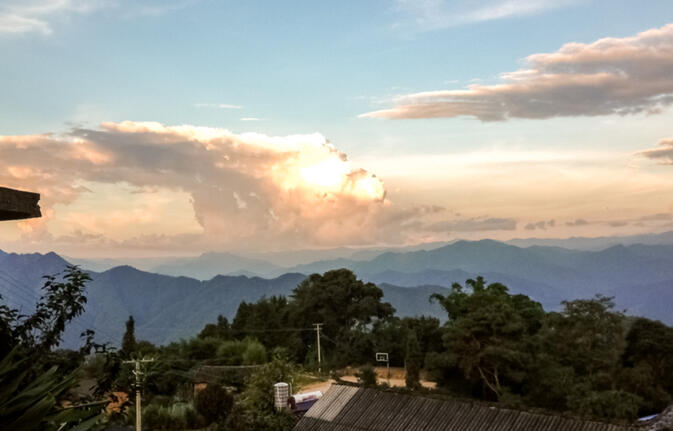 There in my family's courtyard, the white-haired man was lighting paper to burn underneath a ceremonial table. This man and gege then took the smoking incense and kowtowed and bowed before the table as I began to realize the significance of the table. The tea cups were then emptied out across the courtyard, the bowl of chicken removed elsewhere and the other items carried off by the white-haired man, gege and ayi into the night, probably towards a tomb.

Shushu stayed behind, meticulously cutting the chicken into prescribed pieces, which were eaten when the other three returned. As they ate, everyone picked clean certain bones, which they all examined closely and held up to the light, debating the omens that the bones showed.

I felt extremely lucky to have witnessed my family's ancestral ceremony and see this solemn aspect of their life. However, I wonder if gege's suggestion to watch TV meant that I wasn't supposed to. I am grateful for the memories I was able to bring with me after I left Bangdong, and I hope my family will remember me well. I was glad to share in the joys and struggles of the family for a few weeks, in the small hillside village above the Lancang River. 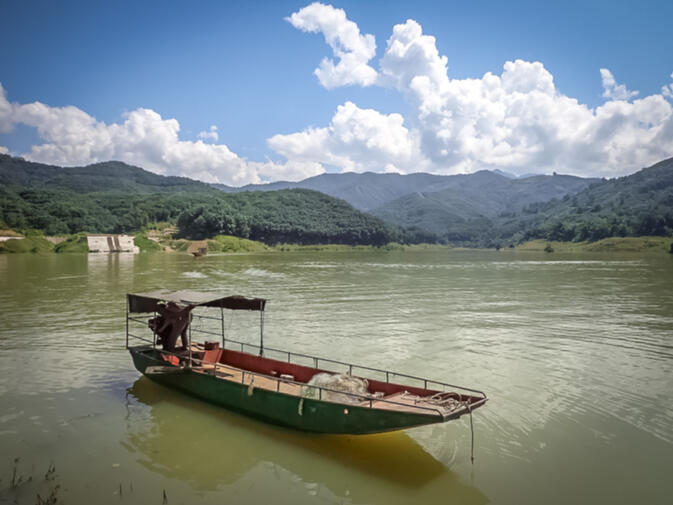 Editor's note: The article above was written by Charles Copeland, who along with six other Princeton University students, is spending several months in Yunnan as part of a study abroad program managed by Where There Be Dragons. The students participated in a home stay program organized by Dragons and non-profit Village Progress just two weeks after first arriving in China.

Sounds like a great experience, educational as well as otherwise. There's a great deal of world outside of town almost everywhere.

I reckon it would be useful to be more specific about what prefecture and county 邦东 is in....judging from the pictures it looks very Lincang/Puerish

Bangdong is in Lincang prefecture around 2ish hours from Lincang city.

Great article with a humanistic touch! Sounds like a more worthwhile study abroad experience than sitting in a classroom...

Nice article indeed! Reminds me of my first time in the mountains above MoJiang where my wife's hometown is.