Elephant poached for ivory in Xishuangbanna 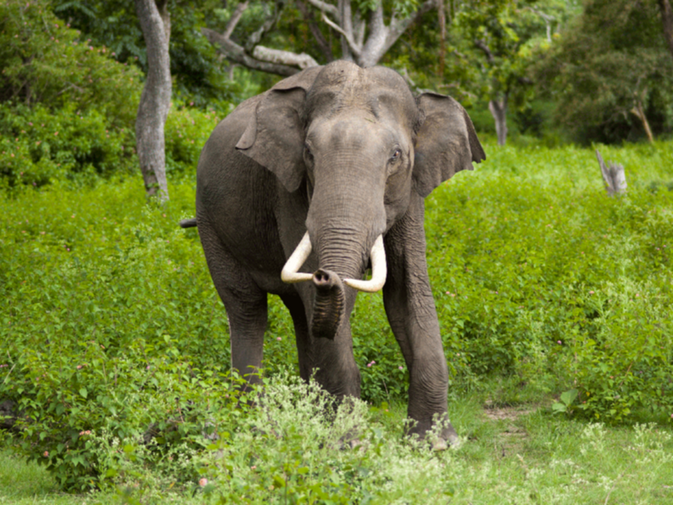 China's last remaining wild elephants are one fewer in number following a grisly weekend discovery in southern Yunnan. Forestry officials announced Monday they had discovered the dismembered corpse of an Asian bull elephant inside a nature reserve in Xishuangbanna. Police are asking for public assistance in a case that has no suspects.

Forestry police were informed of the carcass on Sunday by villagers living in Manpa Village (曼帕村). When they arrived on the scene — roughly 100 kilometers southeast of the city of Xishuangbanna — investigators found the remains of a male elephant that appeared to have had much of its face removed with a chainsaw. The animal's trunk was separated entirely from its head and its tusks were missing.

After conducting an autopsy and ballistics report on an unspecified number of bullets, veterinary coroners concluded the elephant had been shot and killed with a high-powered rifle the Chinese press has deemed a 'military gun'. Although not unheard of, elephant poaching in Yunnan is relatively rare, perhaps due to the small number of animals living in the area.

Similar stories of illegal hunts have occurred sporadically over the past decade, most recently in 2012, 2008 and 2007. All of these instances were in or near Mengla County (勐腊县), and involved Chinese poachers using assault rifles to bring down their quarry. In each case, the animals' tusks were then removed and the bodies left to rot.

The county shares a more than 150-kilometer long border with Laos, an area that includes a 54,700-hectare elephant reserve. The conservation area straddles the borders of both countries and was jointly established in 2009 to allow wild elephant herds free range across their jungle habitat. Five years ago, Chinese authorities estimated there were around 400 Asian elephants living in the region, but that number is now thought to be closer to 250.

Due to thinning ranges brought about by agricultural and industrial development, elephant-human encounters in the region have been on the rise for the past several years. Such experiences often end in human deaths or maulings.

Chinese law strictly forbids the killing of elephants and many other endangered species and dozens of countries have banned the ivory trade since the 1980s. In accordance with anti-poaching laws, police in Xishuangbanna are conducting a manhunt for the poachers, offering rewards of between 20,000 and 40,000 yuan for information leading to any arrest.

This is hardly surprising when at this year's Asian trade fair in Kunming ivory, including whole tusks, was openly on sale while hundreds of cops paraded around in black uniforms just yards away. China will never do anything serious to protect wildlife, because that would get in the way of making money.

cloudtrapezer you're just saying something. China is actually one of the few countries to enforce a pretty strict wildlife protection policy. Banna is one of the few places where elephant populations are growing instead of dwindling because of this policy, much in contrast with other Asian regions.

china law is against killing chin elepahnts. and ch wildlife. i guess that most of the dwindling population in rest of asia ends up with its ivory in yu know where.

to bluppfisk. you saying they didn't have ivory on sale at the trade show? I was there and saw it. Several stalls had tusks for sale. If China had any intention to protect wildlife these people would have been arrested and their stock confiscated. and yes, I'm sure most poached ivory doesn't come from Banna. There aren't enough elephants left there to sustain a poaching industry.

Do conservation areas here offer genuine protection for animals or are they just token symbolic gestures, rather like zebra crossings for pedestrians - a pointless waste of paint?

@nnoble The government has actually seemed to work pretty hard to protect elephants and other endangered species in Xishuangbanna. I'm not sure there are many places where poachers face the death penalty if caught, but China is one of them.

Anymore, the bigger problem I've read about is the encroachment of rubber and other cash crops on their habitats. I visited this area earlier this summer and talked to some farmers living in between two large nature reserves about the elephants. Apparently the elephants will regularly stroll into the villages, wreck houses, eat crops, and occasionally kill people. But in an effort to keep the farmers from killing the elephants, the government has set up an arrangement with a private insurance to compensate farmers for material losses.

China has a long way to go to dissuade people from purchasing ivory and other endangered animal products obtained elsewhere, and to prevent the trafficking of these goods into the country. But it seems that the policies in place to protect the 200-250 elephants living here are actually quite robust.

::( hope they catch them

I just read that an ivory ban in china is in effect now.