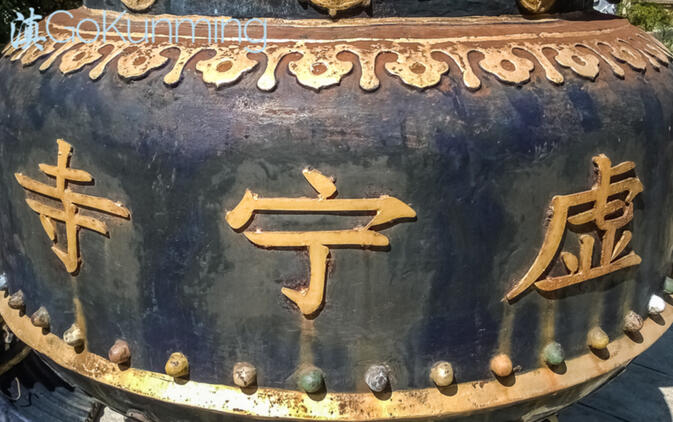 We'd been to 2,345-meter Changchong Mountain (长虫山) in north Kunming before, mostly for mountain biking and hiking. The modest peak — affectionately referred to by many locals as goushi shan (狗屎山) — is one of the few places inside Kunming where forests still hold sway.

The area is crisscrossed by dirt paths and a few appallingly rutted roads. Previous visits to the mountain had revolved around being out in nature and enjoying the quiet. This time, however, we went to check out a local landmark that has stood in one form or another for 700 years — one we had failed to visit in the past. 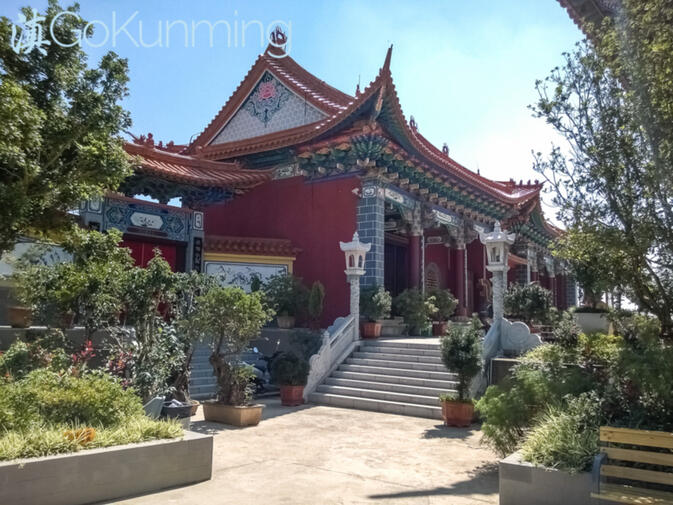 Up one of the mountain's dirt roads is Xuning Temple (虚宁寺), a Zen Buddhist nunnery that recently underwent an enormous expansion and renovation. The front gate is modest enough, a simple sealed red door with small entryways on either side. The unpretentious way in belies the extent of the opulence inside.

A small garden containing lovely ornamental plants and the obligatory coy and turtle ponds sits past statues of our old friends Heng (哼) and Ha (哈). This section of the complex also contains majiang rooms available for rent for easily distractible worshippers. The temple's first pavilion is reserved for the Four Heavenly Kings (四大天王), Buddhist deities charged with watching over the cardinal directions. Behind this building is another set of stairs, and it is up those that the temple's actual size becomes apparent. 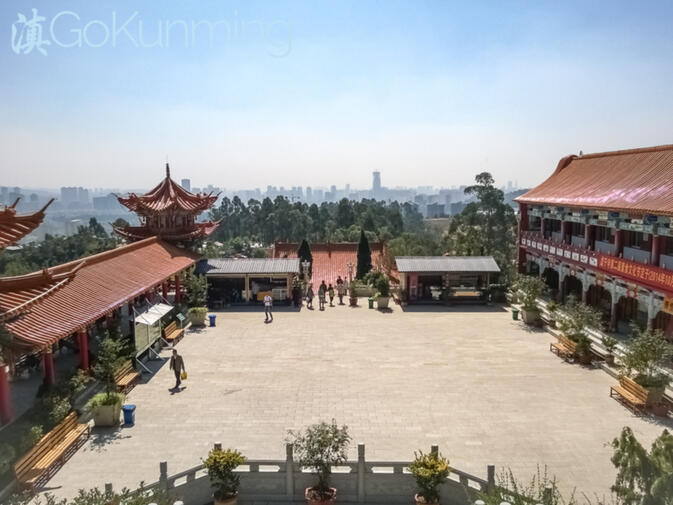 An expansive flagstone square opens onto a long terrace offering sweeping views of Kunming. As the sun beat down, we marveled at just how much the city has grown just in the past five years. Breaking out of our reverie, we climbed up a broad staircase and came to the heart of the temple — a collection of buildings devoted to various members of the Buddhist pantheon.

The main hall is a huge, intricately decorated structure draped in a gentle fog of incense smoke. As we gazed at the magnificent dragons coiled around two of the pavilion's pillars, a bubbly and effusive older woman approached us. In short order she not only convinced us to buy incense, but also just how important it was that we correctly light the sticks and pray to Buddha. 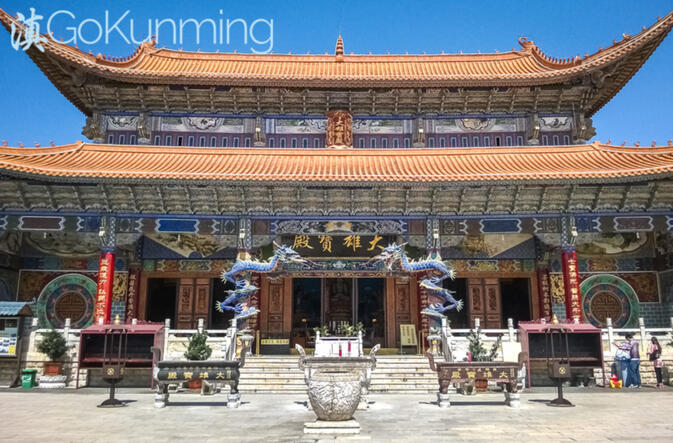 Properly put through our paces, and hopefully imbued with a bit of good karma, we made our way back to the square below and purchased a surprisingly tasty vegetarian lunch for a mere ten yuan. Feeling recharged, we set out to finish our tour of the temple, exploring halls dedicated to the bodhisattvas of justice, friendship and harmony.

Set away from the main group of buildings was a hall for Wen Caishen (文财神), the god of wealth. Wen is busiest during Spring Festival, but, due to China's ever-expanding fascination with material wealth, he apparently now needs his own pavilion. Emphasizing Wen's importance and designated task is the fact that he is always accompanied by his protector, Wu Caishen (武财神), a fierce warrior often menacingly portrayed brandishing an enormous halberd. 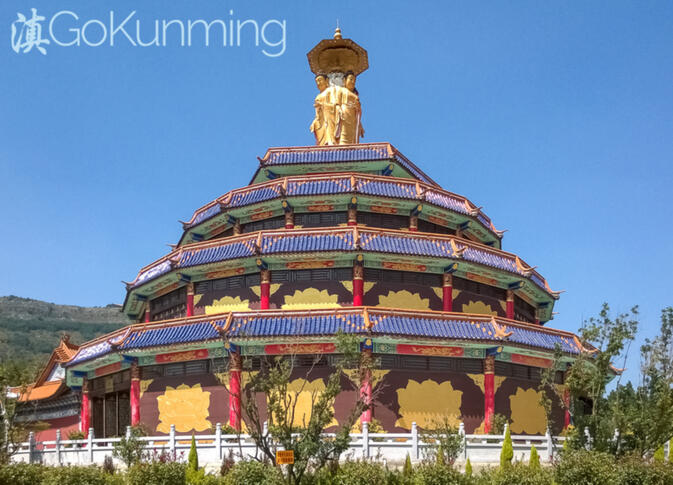 Located behind the temple proper is a gleaming, five-story circular building of an entirely different nature. The edifice — topped with a four-meter tall statue of Guanyin, the Goddess of Mercy, in three different poses — is used for performing funeral rites and holding wakes.

Not wanting to disturb whomever might be inside, we instead climbed to the roof where we were accorded a bird's-eye view of the entire temple as well as panoramic views of Kunming. Sitting alone atop the building and looking over the bustling city hushed by distance was quite the way to end our day. 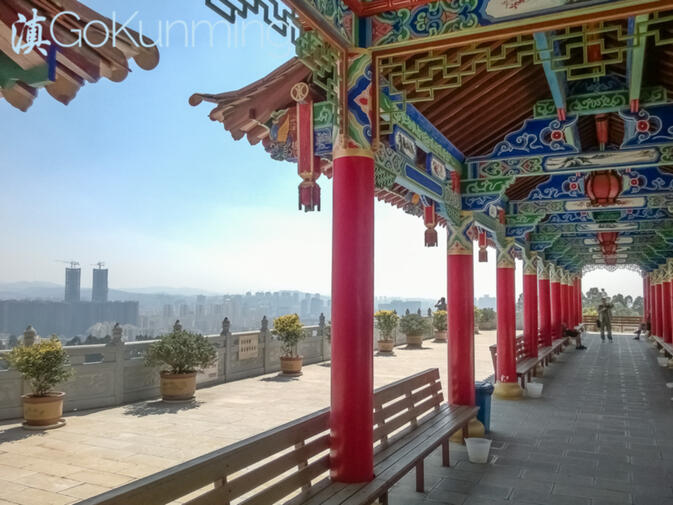 The only drawback to visiting Xuning Temple is the condition of the surrounding mountainside. The area is scarred with marks left by decades of open pit mining. Although vegetation on the peak of Changchong Mountain has recovered nicely from a 2012 forest fire that left it bare, lower down the signs of mining are impossible to miss. Just outside the temple gate is a giant dirt pit which does nothing to augment otherwise beautiful forest cover.

While in the temple, however, we overheard two elderly women excitedly discussing a "forest park". Not knowing what they were referring to, we checked the news upon returning to our office. What we found left us extremely heartened. The excavations near the temple are part of a 600 million yuan reforestation project going on across the mountain. Mining pits will be filled in, land regraded and original vegetation restored over an area of eight square kilometers, according to the news report. 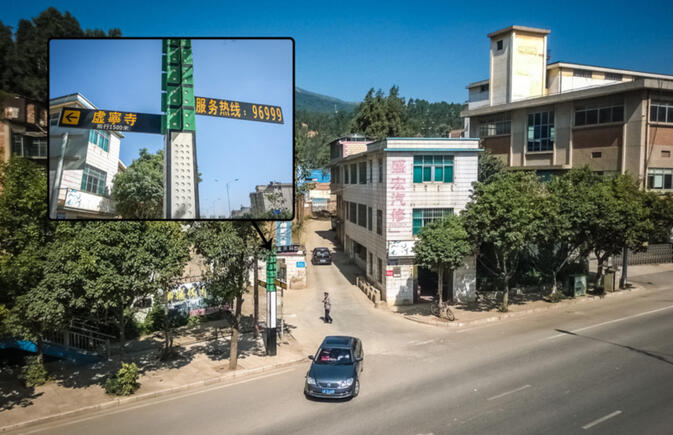 Getting to Xuning Temple is relatively straight forward if you know what to look for. Take the 9, 79, 84, or 115 bus to Longquan Lu and get off at the Shabaying stop (沙坝营站). The nearest road is an unnamed dirt affair heading up the mountain. Follow it — there are plenty of signs pointing the way — and the 1.5-kilometer, uphill walk should take no more than 20 minutes.

Editor's note: Special thanks to our good friend Fanfan for showing us around her favorite Kunming temple. 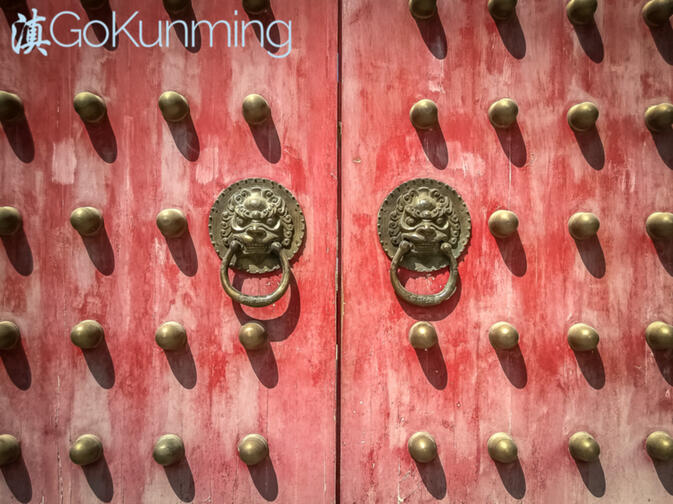 Meh! Thanks for spotting that. Typos have been corrected.

The road out is commonly where MTB riders going up or down the mountain start and end. You should see people on mountain bikes going in and out of the road if going on the weekend. It is also just North of a pedestrian over bridge (where I assume the 2nd to last pic is taken) and can get dusty as hell when cars come down.

Nice article. A scenic spot I've yet to visit.
I've always wondered whether buying/lighting incense etc is something non-believers should really do or not. Is it a friendly sign of respect or a crass act of hypocrisy??

and, you can have a vagitarin meal at the temple.

I love your article and the information about the landscape restoration of the mountain. What agency of government or institution is funding it?

@Ocean: I've never seen any indication that it's unfriendly. Many things concerning ritual in china are not matters of belief/hypocrisy, but a matter of proper and acceptable practice - you can do it or not, nobody will be bothered.

@Alien
I think you're right. I guess I'm thinking "hypocritical"; rather than "unfriendly" (as if an athiest wanted to take Holy Communion or something), but you're right of course, most Chinese don't take it all that seriously and are very slow to take offense (if they feel offended at all). Thanks.

The Qiongzhu Monastery is also quite nice if you need inner peace with less people going up there. The road to the mountain starts near the Haiyuan Bus depot.

The air looks nice up there, unlike longquan lu.

That restoration project sounds nice. Without knowing the details, it would be an interesting opportunity for the foreign community to do some volunteering, if it ever takes such form where it might be applicable.

How to get there?

@JanJal: Not sure what the point of volunteering to help on this would be - they've got the money and the workers will probably want to get paid.

Simplified characters on that 香鼐 ... shameful.

Let's be clear here. The site has been totally reconstructed over the last few years. It used to be basically an abandoned old temple. The current incarnation is evidently a local government attempt to create some kind of weak weekend alternative slash spiritual sinkhole to the noise and construction hell awaits those living in northern Kunming. Rather than constructing cavernous cookie-cutter colonist chalets with come-good chakra-conciliating carvings, perhaps they should kick the military and cars off the mountain and open up the real, replanted nature for some better bushwalking and marvellous mountain biking?

I note meekly that the Australian/China conference in Baoshan this month on the management of the outdoors, with particular reference to recreation and trails, will probably fail to be attended by anyone from the Kunming government, even as Sichuan, Baoshan, Australia and diplomats descend on the normally out-of-the-way town.