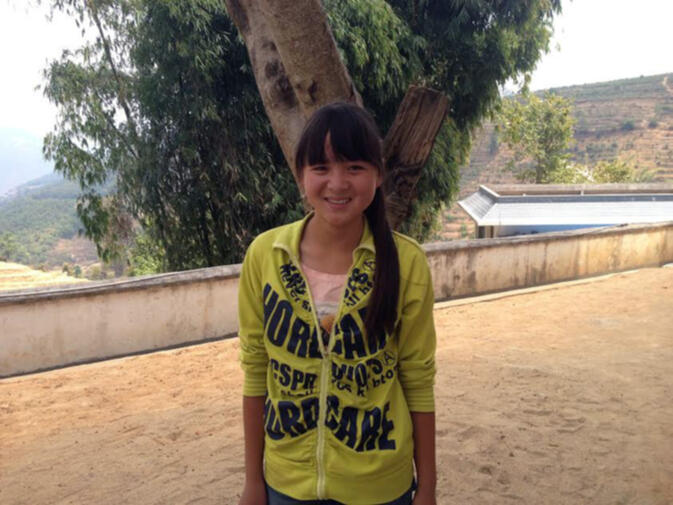 Editor's Note: Every year, three out of ten eighth-graders in Yunnan will drop out of school. Driven by economic difficulties and the needs of their families, these students have little hope of resuming their education. This is the story of one talented eighth grader who risks the same future unless our community takes action soon.

Guo Conglan (郭从兰) is an eighth grade student at Dachaoshan Middle School (大朝山中学), located in Lincang Prefecture. Having known her for the past two years, I can say for certain that she is a student with great potential. She has earned her place in the school's advanced-level class through hard work and unceasing determination.

Aiming higher than the majority of students at Dachaoshan, she dreams of attending high school and then matriculating on to college. Unfortunately, she recently fell ill with a serious case of meningitis. Her illness put her plans for the future in serious jeopardy. Guo's homeroom teacher, who has been teaching her for two years, explains the situation as follows:

Guo Conglan is part of a single-parent family. When she was very little, her mother abruptly left the household and never returned. Since that time, her father has faced many serious issues and cannot successfully manage the family's financial matters. He often drinks heavily and falls ill, spending large sums of money on alcohol and his personal medical bills.

Because Guo's younger brother is in elementary school, her family relies upon her 80-year-old grandmother, who picks tea leaves to earn a meager income. This sort of work is an immense strain on Guo's elderly grandmother, exacerbating the family's problems.

Recently, Guo contracted a serious form of meningitis and was taken immediately to Lincang People's Hospital. Because of the gravity of her situation, she has already been required to stay for three weeks. The resulting hospital bills are, for Guo, enormous. This tragedy has only added more misfortune to Guo's already struggling family. With little savings and limited financial opportunities, they have tried to economize as much as possible. Despite this, none of Guo's relations have a way of paying back the huge amount of money owed to the hospital.

Although Guo will soon be released from the hospital, her future in school and in life will be directly affected by her medical debt. If she tests into high school, she will be unable to afford the tuition. It is also likely that her younger brother will be unable to stay in school, and instead will have to find a job as early as possible.

Moved by the tragic situation of this beloved student, the students, teachers and administrators at Dachaoshan Middle School have raised roughly 7,000 yuan in order to support her. Still, it is nowhere near enough. In order to pay for the medical care that saved her life, Guo needs at least another 12,000 yuan.

The kind folks at Salvador's Coffee House have generously donated an additional 4,000 yuan towards Guo's debt and have set up a donation box at the cafe. Further, online donations can be made through Zhifu Bao (支付宝) to the account of 蔡寒韫, ID: 18788376297.

If you would like to help out but don't have a Zhifu Bao account, you can also make a donation with most Western credit or bank cards by visiting the website You Caring. For any questions, please get in touch using the email address franderam[at]gmail[dot]com. Any and all donations will be gratefully accepted. Guo Conglan, her family and all of her teachers and classmates extend their thanks in advance.

This made me think about the fundraising for Li Ping and I looked up the past articles to find that she had passed away after a few big fundraisers and there was now a fund to be used for others in medical need. If there is still money in this, can it go to this girl?

The money Salvador's has put toward Guo's medical bills was taken from the fund originally established for Li Ping. Sorry to have omitted that from the article.

Quesadillas and some feel good charity, I'll be over soon. Come on GoK community, let's force them to use a really big box.

Head over that way next week, make sure I'll be adding to it, someone with a self determination coming from that background is hard to find!

I'm sorry to those who are only just now learning about Liping's passing. It was amazing what everyone did in Kunming and beyond to come to her aid. She left behind a fund in her name to help other's with unaffordable medical expenses. 4000 from this fund has been pledged to Guo Conglan.

We will have a fundraising box up in Salvador's for those who wish to donate. In addition to the 4000 from Liping's fund, we will match any donations we receive up to a total of 4000. Let's get the rest of Guo Conlan's bills covered!

Hi being new to this site and reading the story of the little lass Guo Conglan posted Frances Deram, we are semi residence of Kunming but living in Beijing at present will move back to Kunming buy Xmas been waiting two + years for our apartment to be complete, would like too make a donation to this fundraising, would like to communicate with Colin Flahive by email if possible, my contact is donbowsell@outlook.com

It is really heartwarming to know that so many people are willing to support Guo Conglan even though you all have never met me or her. Thank you so much! I hope we can meet our goal of 12,000 RMB!!

Fran, I can't speak for others, but as an American I can certainly understand the idea of crippling medical debt.

Hi everyone! I have just created a Youcaring fundraising page for this case! If you do not have a zhifubao or Chinese bank account, we are accepting donations via Paypal etc. here: www.youcaring.com/[...]

The You Caring information has also been inserted into the article.

We just received an email from Frances Deram informing us the 12,000 yuan goal for Guo Conglan has not only been met, but exceeded. Thank you to everyone who helped out! The speed with which this was accomplished is truly heartwarming.

Thank you everyone!! I will be sure to send out an update regarding Guo Conglan's push to success!

I wonder how one can accept systems or societies where there is no equality, neither in real life nor in chances.

But it seems the time for dreams of changing are passed these days. i hope they will come back and people will think of other ways to live in a more equalitaryan and free human society

Gompo, I hope so too, but you and I both know it's not necessary to wait to do one's own thinking, and doing, even if it's not currently fashionable.

Below is a thank you letter from Guo Conglan to everyone who participated in the fundraiser:

Not long ago, I became ill with meningitis and had to pay a lot for my stay at the hospital. Additionally, I had a re-examination which also cost my family a lot of money. This situation caused a lot of anguish for me and my family. I thought, "What should I do?" To me, your help is like providing me with a shelter in a terrible storm. Thank you very much.
Going to college has always been my dream — it is such a wonderful and sweet dream! But when I awake, it shatters to pieces. I felt like it is so unattainable.

You have given me so much help and encouragement. Now, I truly believe that I can fulfill my dreams. I will surely strive harder in school and make my dream of going to college come true. Because you have helped me in this difficult crisis, you have given me faith and courage.

I hope I can meet you face-to-face in the future to say "Thank you!"

Wishing you good work, good health, and happiness a thousand times over!