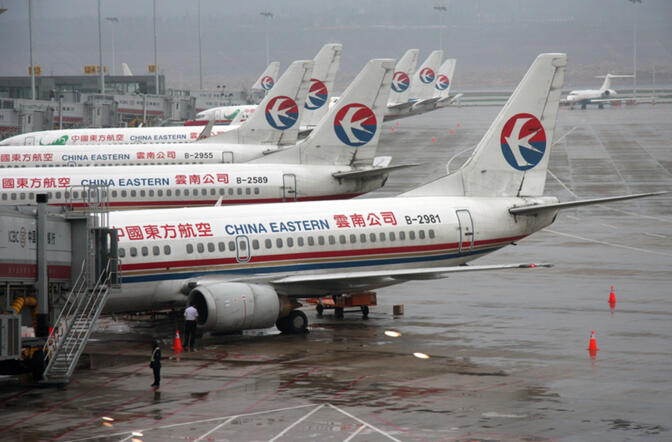 I've always liked looking at airline route maps, finding out where you can fly from where and extrapolating from those linkages broader issues of geography and development. Here in Yunnan the symbolism is particularly acute. Kunming's cavernous Changshui International Airport opened to much fanfare in 2012. Handling 24 million passengers annually, it's the seventh busiest airport in China. That's the same passenger volume — and rank in its respective country — as New York's John F Kennedy Airport.

I've been making all sorts of maps over the last few years, but had never made an airline route map before. I discovered Yunnan currently has 165 air routes. When I put them all together on a single map, it was a confusing jumble of overlapping lines, looking not unlike United Airlines' route map of the United States, which is a terrible map and infographic if ever there was one. Nearly impossible to read, it's hard to imagine what possesses United to keep printing this map year after year in the back of every in-flight magazine. 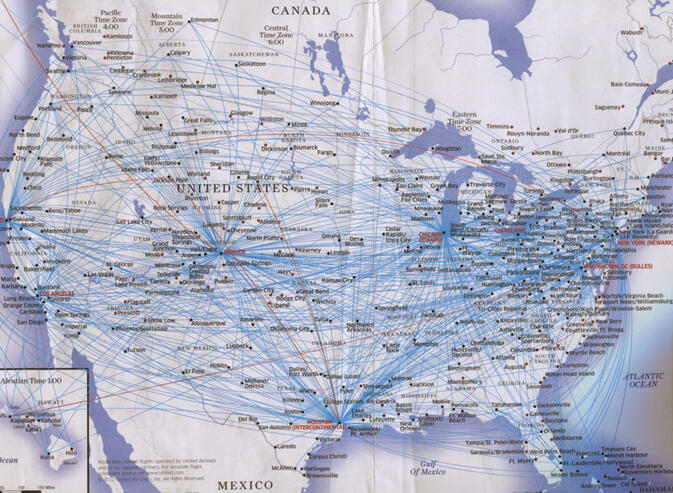 The snazziest way to visualize air route networks is through an online interactive map such as Air Asia's, where you can elevate a particular airport's connections above the noise of the others. But since I was producing static maps, I decided to separate the flights by three scales: intraprovincial, interprovincial, and international. This makes thematic as well as design sense. Let's start with the intraprovincial map and the routes that never leave Yunnan's borders. 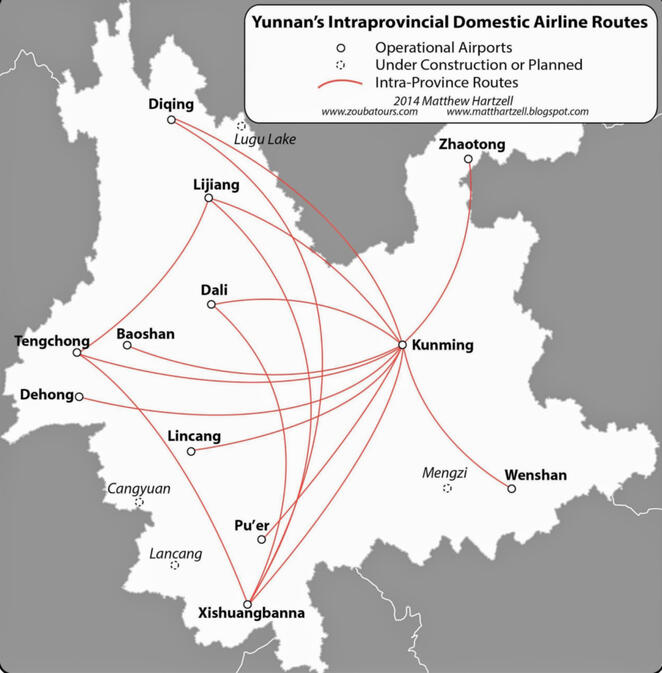 What we see here is mainly a hub-and-spoke network centered around the provincial capital Kunming. Each one of Yunnan's eleven regional airports is connected to Kunming. Although the distances between these cities and Kunming is not always so great, the fact that Yunnan is such a mountainous province means travel by land takes more time than in flatter provinces and makes flying more attractive. Add to that the fact that Yunnan is a major tourist destination and that inbound Chinese visitors often have limited vacation times, and it becomes clear why air travel is so much in demand.

But not all these routes fit the hub-and-spoke model. Five routes connect various regional airports to each other in the west. It shouldn't come as a surprise that these airports all serve major tourist destinations. Some of the routes also save considerable time. It takes nearly 24 hours to drive from Diqing on the Tibetan plateau, to Xishuangbanna, in the tropics of Southeast Asia. Flying takes just over one hour.

It's interesting to note that Yunnan has more intraprovincial air routes than any other province in China except Inner Mongolia and Xinjiang. The profusion of routes there can be explained by its enormous area — four times larger than that of Yunnan — and elongated footprint. 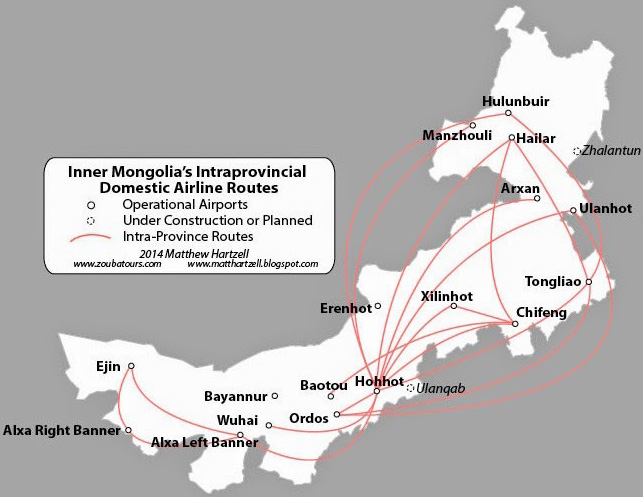 Only Inner Mongolia has more intraprovincial routes than Yunnan

And what of all those new airports? I'd assumed their construction was because Yunnan's development model is more dependent on tourism than most other provinces. However, it turns out that new airports are being built all across China.

These include areas with little tourism. It's all just one piece of China's giant infrastructure development strategy puzzle, which also includes new highways and railroads. In fact, all but four of China's provinces are currently building new airports. Xinjiang tops the list with five under construction, but with four of its own, Yunnan is close behind in second place.

Back to Yunnan. Let's now look at interprovincial routes. This is where the vast majority of air travel is, and thus lends itself to the busiest map. So busy, in fact, that I separated those flights radiating out of Kunming from those connecting through its smaller, regional airports. 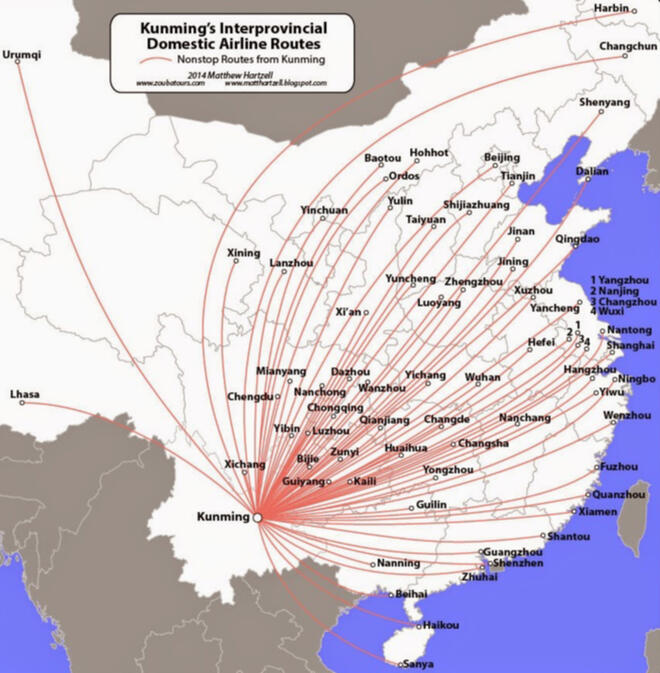 Kunming has 66 routes linking it to cities in every province in China. That's a pretty impressive network. Kunming is certainly better connected than most Chinese cities of its size. Again, tourism is mainly the explanation for this fact. Not only does Kunming boast flights to major cities, but also to third- and fourth-tier cities which I admit I had never even heard of (Yongzhou, Yuncheng anyone?).

We can detect within this network 'clusters' of connected cities in certain identifiable regions and a scarcity in the spaces in between. The clusters I speak of are in the north around Beijing, in the east around Shanghai, along the southeast coast, and across a swath of central China from Sichuan to Hunan. These clusters correspond somewhat to population density but also to economic activity. 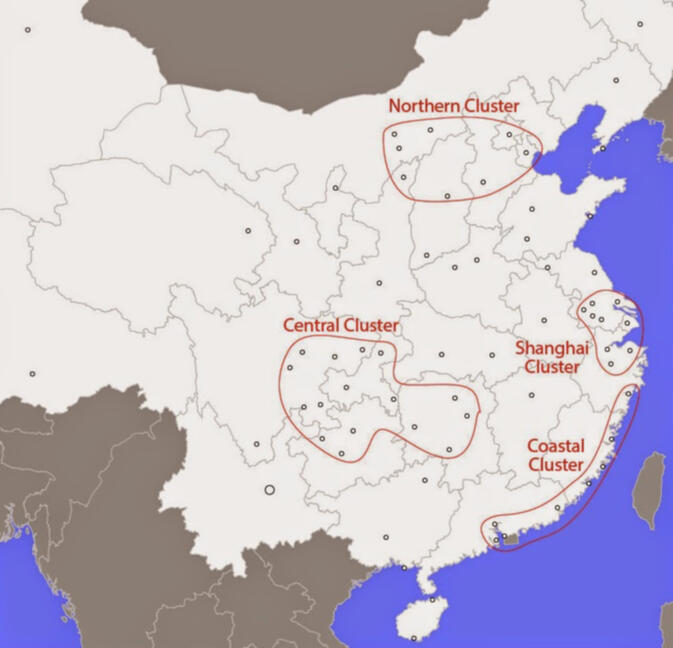 An additional 59 routes link nine other Yunnan airports to out-of-province destinations. Again, this is pretty impressive. No other province in China has so many flights out of its non-primary cities. The big kahuna here is Lijiang, one of the biggest tourist destinations in the country with 24 interprovincial routes of its own.

I was surprised that even smaller, less touristy cities such as Pu'er and Baoshan are connected by nonstop flights to cities like Guangzhou and Beijing. Most surprising are Tengchong's six interprovincial flights. What was but a nascent tourism industry when I first visited in 2006 has exploded, apparently, with Chinese from Beijing, Shanghai, Shenzhen, Hangzhou, Chongqing, and Guangzhou now all able to fly nonstop to enjoy its clean air and hot springs. Today Tengchong is being marketed as a destination getaway for retirement and spa holidays. 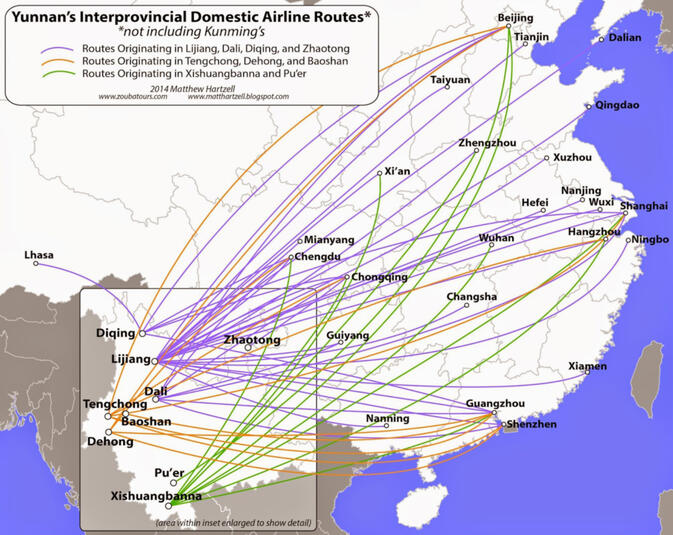 Finally, let's jump from a national scale to the international. Here we find 27 routes to 22 destinations overseas — including Taiwan and the Special Administrative Regions of Hong Kong and Macau. The Spring City is certainly not as internationally connected as Beiijng, Shanghai, or Guangzhou. Nor does it have as many international flights as bigger inland competitor Chengdu, which has nonstop routes to Europe, Australia, and North America via Vancouver and, as of May 2014, San Francisco.

On the whole, Yunnan is still pretty well linked internationally considering its size. This time inbound tourism is not the only explanation. In fact, outbound tourism to destinations in Southeast Asia — accounting for 12 of these 22 cities — may be a stronger driver. Business and trade also play a role here. Officials both in Kunming and Beijing like to promote Yunnan as China's Bridgehead to Southeast Asia. It's curious, however, that there aren't any flights to Vietnam, which shares a border with Yunnan. 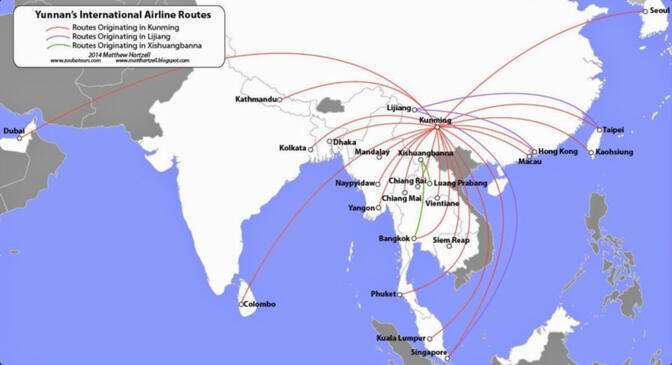 Three airports in Yunnan province together combine for 27 international routes

South Asia is represented as well, with nonstop flights to Dhaka, Kathmandu, Kolkata, and Colombo. The only East Asian destination outside mainland China is Seoul — a former connection to Japan no longer exists. Kunming's closest destination to Europe is Dubai, and that is not very close. Expect more intercontinental routes to be added soon. Of future destinations, my money is on Melbourne and Amsterdam first.

While most of these flights originate in Kunming, Xishuangbanna and Lijiang also have international flights. Xishuangbanna is connected to Laos and Thailand, whose ethnic makeup are similar to the prefecture's own Dai population, while Lijiang attracts visitors from as far away as Taipei, Hong Kong, and Singapore.

What I cannot understand, is why there are no longer any connections to Hanoi since Vietnam Airlines cancelled the route two years ago. It's probably the closest foreign capital city to Kunming, and the overland trip takes at least 18 hours, so a flight route would make sense. Also, Vietnam is by some standards one of the world's fastest growing economies so I really don't get it. Are relations that cool?

As for the next international flight to and from Kunming, my money wouldn't be on Amsterdam, as rivalling Chengdu already has a direct route there. Even though the flower business is blooming in Yunnan, that hasn't compelled KLM to add a Kunming route.

Given the sheer number of Belgians in Yunnan, the new destination must of course be Brussels.

China Eastern has a direct flight to DaNang, which is not shown. Also a direct to the Maldives is missing.

I thought there was mention of a direct flight to Paris somewhere. Any info on that would be appreciated.

I remember the mention of Paris too as the first intercontinental flight directly connecting Europe.

Airplanes are for people who don't like to travel.

i didn't have the foggiest idea that changshui was to busy ;-)

With all this air traffic, I wonder why I never say — what are called — "chemtrails" while living in Kunming like I have in the USA, Europe, and Japan?

coz it is so dry and the planes are much lower coming into land/take off.

I have heard a rumour that Eastern will fly direct to Frankurt. Lets see.

Like it's mentioned here, the Kunming-Paris Route should be launched this year.

@Cromson, I was hoping for a more specific date, but I guess some time this year is as specific as it gets. And 2015 for the other international flights. Thanks!

Yeah!! Hop stop over in Europe on the way to or from Canada / US.
I love it when a plan comes together..

@AlexKMG
You're right. I missed those two. Maldives and Danang both have nonstop flights from Kunming. So I was wrong to say there are no flights to Vietnam.

Still, it's strange that there's no flight to Hanoi.

But, to respond to Blupfisk's question "are China-Vietnam relations really that cold" I'd have to say, yes they are! Just look at the news any day this past week. South China Sea oil rig disputes, deadly protests at Chinese factories...

Looking at United's map, then at Matt's maps, and thinking of almost all airline route maps I recall viewing, I wonder why the routes are invariably shown as curved lines / arcs? Does this imply going from ground level into the atmosphere and back down? Does it reflect the often indirect nature of flight traffic routes? Is it meant to impart the feel of flying around the sphere that is our planet? Or, does it simply make it look more "comfortable?" Just wondering....

Matt, do you know of any plans for a direct flight to ANYWHERE in Indonesia sometime this year?