Representatives from the Kunming Rail Transit Group (KRTG) have announced the metro lines connecting Chenggong to northern Kunming are nearly finished. On April 20, a "final exam" is scheduled that will determine whether the railway is ready to go into operation. If the transportation system receives the go-ahead from national auditors, it could open for public trial runs as early as April 30.

Technicians and construction crews are working furiously to ensure things run smoothly throughout all 19 new stations spaced along 20.85 kilometers of track. Unmanned train test runs began April 1, but have since started carrying passengers — most of them metro workers, provincial officials and reporters.

The new metro platforms lie along Line One and Line Two. Line One currently begins at the University City Station (大学城站) in the city's southern outskirts and ends at Xiaodong Village Station (晓东村站) near the now decommissioned Wujiaba Airport. The route will be extended by six terminals, ending at transfer stop Huangcheng Nan Lu Station (环城南路站).

At the transit station, passengers will be able to board trains heading further north through 13 stops, most of which lie under Beijing Lu. Line Two ends at the North Bus Station. A trip along the entirety of the two routes covers 42 kilometers and is expected to take between 70 and 75 minutes.

In addition to making sure the stations have properly working elevators, escalators and ticket machines, transit officials are checking to see if there are any bugs in train navigation systems. Speeds along metro tracks are almost entirely automated utilizing a control system currently in use by subways in Beijing, Shanghai and Shenzhen. Each train will also have a human conductor who can manually override computer systems.

According to KRGT planners, trains will pause for 60 seconds at each platform and run at seven minute intervals. Ticket costs will be determined by the distance a commuter needs to travel and initially range in price from two to seven yuan. Fares will be payable in cash at both ticket machines and vendors, or by swiping a rechargeable metro card.

A hard and fast date for the two lines has not been announced, although April 30 has been labeled a "tentative" goal. Transit authorities are perhaps playing it safe, as construction on the Kunming Metro has repeatedly experienced blown deadlines as well as one fatality. Plans for the projected 300 billion yuan urban rail project were first announced in 2010 with a proposed 2013 finish date for Line One and Line Two. Line Three, which runs east to west through Kunming, has been under construction for four years, but progress reports have not recently been made public. 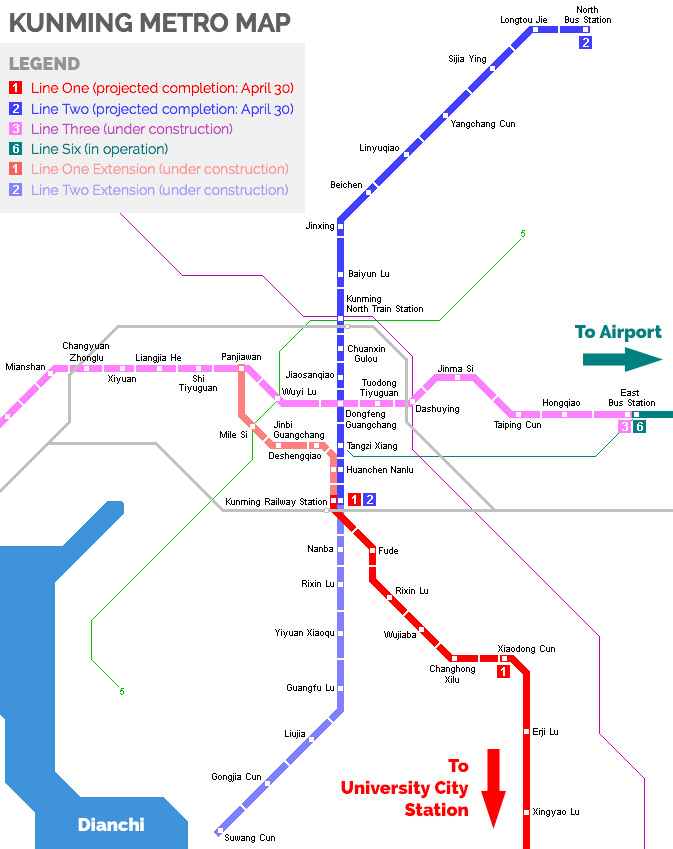 Great, an easier hop from DianChi area to bars and Beichen beer runs.

What happened to lines 4 and 5?

Line 5 has not projected start date. Yet it would serve NanYa and Dianchi Road down to Dian Wei Chen.
I can only assume line 4 is the same and could be the thin purple line running NW to SE.

April 20th final check to ride from Chenggong to North Bus Station. There are stacks of unfinished tiles outside some downtown stations still.

Once line 1 extension and line 3 are operational, only then will we have a real subway in operation, connecting NSEW points of the city, an inner city loop, a connection to the airport and train stations. Until that time, I would expect passenger numbers to be quite low, though Beichen and North become much more viable for city workers to live.

I do wonder also if anyone is working on the bus connections and combining both the payment cards from buses with subway and rejigging the stops or entire routes so that they link with the Subway. Hopefully, but likely it will be a secondary consideration knowing how things work in China!

When they first did this in Shanghai in about 2004-5, it was necessary to exit some subways stations, and cross a road to get to some rail stations. Eventually it all got sorted out.

Can we use bus cards on the Metro? Or will we need to have two transport cards to use Kunming's public transport?

For the moment, it's apparently separate cards, since they are different companies. 20rmb for a prepaid card. Elderly people will get discounts and even free rides for some. Young students will also get reduced prices. They are probably going to combine the cards in the future, since that method worked well in other cities.

Thanks. I guess the subway construction went so fast they didnt have time to sort that out with the cards yet.

I can't believe it. I live in downtown Kunming and study in Chenggong, so I have to take the bus everyday at 6:30 AM to Chenggong and be back by 5:30 PM. The subway will make my life a lot easier, I hope this is true.

Went for a ride today. Not crowded yet. It seems all stops on lines 1 and 2 are in operation except for the North Train Station.

Can anyone please tell me whether the metro is functioning between Kunming South Bus station and Kunming Railway station? Also, if so, what time does it stop running at night?
Many thanks

Anyone know when Metro Line 3 will come online? I read in another article that the local government was being pretty quiet about it. I thought I recalled a completion date of spring 2015, but maybe it's been pushed back to 2016 now?

As best as I can tell Line 3 is 'officially' scheduled for completion in 2016.

However, my friends and other locals supposedly in the know all say late 2015.

So who knows but that is the best and most reliable info I have.

September 27, 2022 "We are an international kindergarten located in the south of Kunming looking for English-speaking Home Room Teachers. As a joint venture between Europ …"
Jobs Wanted Jay-z

September 27, 2022 "Welcome to visit Kunming, I am chinese and I drive very carefully. I will provide you with the most professional car service in Kunming or other Yun …"
Jobs Wanted J J .... Kunming

September 27, 2022 "Hi , I’m J and currently I’m working in a public school as a science teacher. I have 5 years of teaching experience in English and Science …"
Tutoring Services Offered Miaoxiaomiao