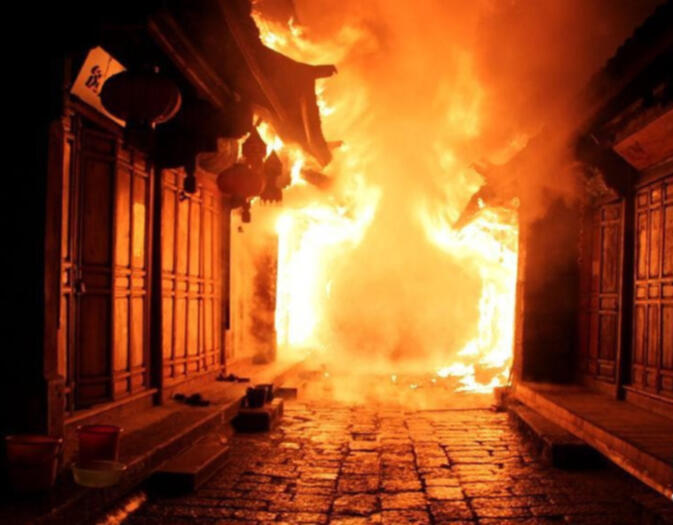 An early morning fire in a popular northwest Yunnan tourist haven has destroyed a number of businesses and homes. The blaze in Shuhe (束河) broke out at 4:10 in the morning, according to a China News account, and was eventually brought under control by local firefighters before it could spread more widely. Although at least 10 businesses were razed in the flames and many residences damaged, no casualties have been reported.

Firemen rushed to the scene of the flames early Sunday morning in the town roughly seven kilometers north of Lijiang. Locals formed bucket lines from a nearby stream to assist firefighters who were dousing flames from pumper trucks. The blaze was contained in just over an hour and authorities announced the fire was completely brought under control around 5:30am.

Local shopkeepers have now begun the laborious process of sifting through debris for valuables while clearing away rubble and wreckage. The cause of the fire is still under investigation as emergency workers, many of them from a local volunteer fire brigade receiving high praise from official emergency crews, continue to look for clues into exactly where and how the flames began.

Although the blaze was not particularly large, firefighting teams told reporters their biggest concern was explosions. Many storefronts near where the blaze occurred contained kitchens and firefighters found it necessary to run into buildings, locate pressurized gas canisters used for cooking and drag them out the buildings to safety.

Shuhe's was the third conflagration to break out in a northwest Yunnan 'old town' in the last 13 months. The fires were all centered around dual-use shopping and residential areas where buildings, some of them quite old, have been constructed using local architectural traditions that mostly utilize wood. The buildings are often situated wall-to-wall along alleys too small for modern firefighting equipment to enter.

A huge swathe of Shangri-la (香格里拉), once known as Zhongdian (中甸), was destroyed in a January fire amidst such circumstances. Hundreds of dwellings as well as popular cafés and shops went up in smoke as firefighters struggled for hours to quell the flames. Last year in Lijiang, one of the most poplar tourist attractions in the country was beset by a similar blaze that claimed 13 buildings in the city's old town, also known as Dayan (大研). Attempts to bring the blaze under control were reportedly hampered by low water pressure in fire hydrants as well as narrow street conditions.

Just one month after the Shangri-la fire, Assistant Country Director of the United Nations Development Program China, surnamed Yang, made headlines when he suggested those involved in disasters such as earthquakes, floods and fires, should rely more on public aid than that provided by the government.

Speaking in Mangshi (芒市) in February of this year, Yang said "...Chinese people are accustomed to relying on aid from the government and lack awareness about their role and that of communities in disaster management." At the time, Yang failed to offer his opinion on the quality and safety guidelines of government-designed and funded buildings that often predominate popular tourist attractions.

At least this time the watercourses, that run through the streets to provide water for fire-fighting, were not built over. As I believe they were in Shangrila.

Is it possible it's arson? Are they trying to burn down these 'old towns' to justified building new ugly high-rise? Something smells fishy to me.

Shu He already has it's new area, built adjacent to the old town. The new area is a clone of the old town. As the businesses were restaurants it may be that this was in the new area.

PS I am sober today.

Yes I think the old town was all locals, and the new town was all businesses and hotels, bars, etc. I think they abut each other.
But it does seem a little odd that all these fires started in the small hours of the morning. If it was arson I can think of many alternative reasons for this, including protection rackets.

Anything's possible, but I don't see reason to jump to conclusions with no evidence.

In forums you are suppose to 'jump to conclusions' as a way of discussion. It's only one of many possibilities :-)..

Apparently a fire almost broke out in Lijiang old town last night too.

None of that is arson and its naive to believe so - sorry for saying that.

But if one or two more of these fires wipe out yet a few old towns, then it must be a Revenge of The Spirits.

...or who knows. With all them guys with throat-cutter cleavers these days, and ladies with fancy rat poison, ...some guy walking around with a box of matches targeting old towns would probably be no big news in here.

Judging by the photo its probably one of them revengeful poltergeists, that Goullart wrote about, that hide there.

Writing as a hotel owner in Shuhe whose staff came out that night to fight the fire (we were about 150metres from the fire), alongside the gutsy locals, let me dispel the myths and errors. The fire broke out in the old part, barely 20 metres or so from Old Sifang Square. It is not arson but apparently burnt incense sticks that started the fire.

Thanks for the updated information.

If it was from the incense then it must have been The Poltergeist.

For anyone who has not read Peter Goullarts book Forgotten Kingdom, go and grab a copy, its a great book and theres one chapter on Lijiang Poltergeists.

The Spirits are on the loose. Kunming has had an old City God Temple too, but the City God is buried under a tall building now. That guy shall not be waken.