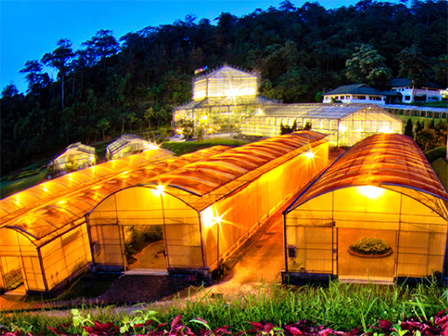 When many tourists think of Thailand their eyes immediately glass over as they imagine white sand beaches and azure blue seas. But the country has more to offer for those not hell-bent on attending full moon parties or diving with whale sharks. As an ever-increasing number of Chinese tourists are discovering, northern Thailand, devoid of seaside resorts and so far immune to all-night rave culture, has its own considerable charms.

In the mood for mountains and forests as opposed to sea and sand, we again found ourselves in Thailand's former Lanna capital, Chiang Mai. Only a 90-minute flight from Kunming, the city offers visitors a host of sightseeing options. Many of these, such as tiger petting zoos and trips to see "long neck" Kayan villagers, are of dubious provenance and yet often packed to capacity. 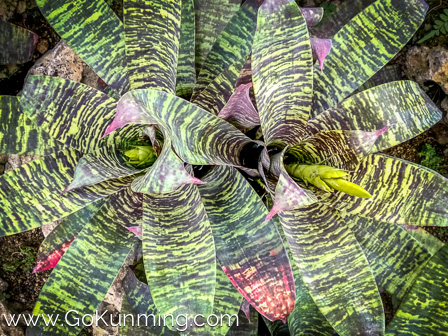 We were looking for something a bit more off the beaten path. A helpful taxi driver named Lucky, perhaps sensing our tourist fatigue, suggested we check out the Queen Sirikit Botanical Garden. He told us that although the gardens were quite beautiful, the vast grounds were usually devoid of vacationers.

Lucky had his son pick us up the next morning. We sped away from our hotel in a comfortable minivan and headed toward Doi Suthep, a 1,600-meter tall massif that forms the northwestern periphery of Chiang Mai. We quickly left the city sprawl behind as our driver pointed the car toward the steep and winding climb into the forested hills. 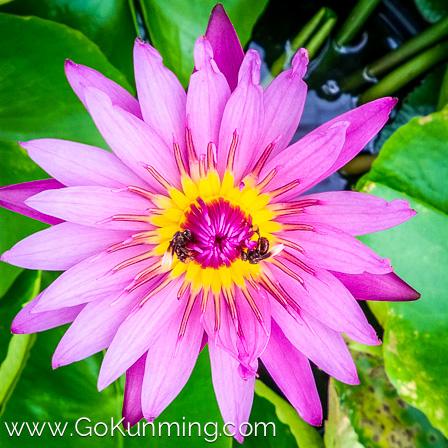 In less than 20 minutes we had arrived at the main gate of the botanical garden. As we paid the 180 baht (35 yuan) entrance fee — which included tickets for two adults and a charge for our car — we spotted an encouraging notice declaring tour buses were not allowed inside the complex.

Cars can gain entry but roads through the 1,000-hectare gardens are limited. Most attractions and sightseeing options are more easily and more enjoyably accessible by footpath. 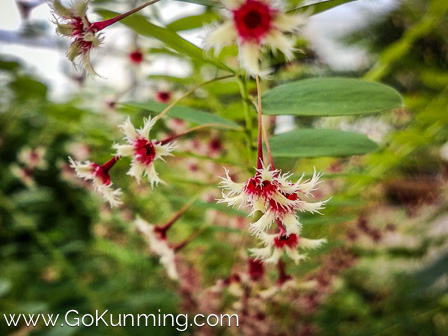 Immediately inside the gate sits a modest visitor's center fronted by a series of small waterfalls and cataracts. As open and visitor-friendly as the gardens are, their primary function is not as a tourist destination but as center for education and learning concerning the estimated 22,000 plant species native to Thailand.

Established following the creation of Thai Botanical Garden Organization in 1992, the reserve is Thailand's largest. This is due largely to the patronage of the country's queen, Her Majesty Sirikit Kitiyakon, whose name and considerable resources, were attached to the complex in 1994. 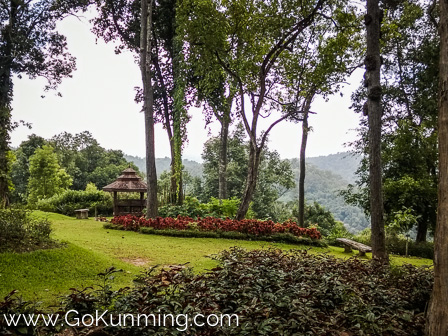 The layout of the botanical garden is basically a loop traversed by an undulating road or interconnected series of footpaths. Both routes snake through manicured grounds and unmanaged forest before eventually lead to the most visited area of the gardens, the greenhouse complex.

We followed the well-worn paths as they meandered through huge collections of azalea, rhododendrons and any number of other flowering plants. Down low on the hillside, near the visitor's center, we didn't encounter any other tourists. 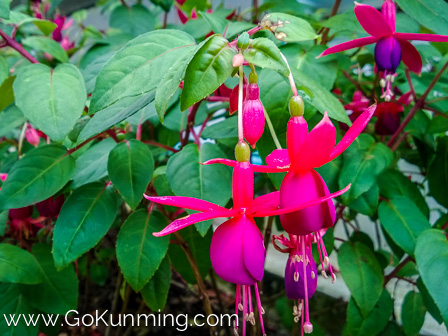 The only people we saw were gardeners clothed in long-sleeves and thick pants despite the 35-degree temperatures. There were a lot of them — weeding, pruning, planting new flowers and raking up the endless supply of leaves falling from the canopy above.

It was an incredibly peaceful stroll. The rains that had fallen almost ceaselessly since we arrived in Chiang Mai stayed away and instead of being overcast, the sun shined down, bright and hot. Luckily for us, the garden grounds were built with stifling heat and low impact exercise in mind.

In addition to the shade provided by some shockingly huge trees, comfortable benches and covered sitting areas are placed roughly every hundred meters along the path. We sat down at one and listened to the omnipresent cackling of birds in the trees and were captivated by the sounds of that strange tropical insect that creates a din more like that of a power tool than a living thing. 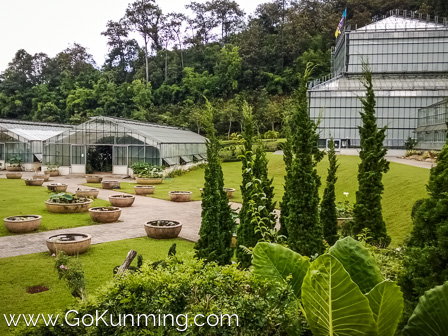 Eventually we made our slow way toward the greenhouse area. It is comprised of four elaborate conservatories and eight glass covered buildings. Each of the smaller structures house plants from specific biological families or group those found in similar habitats together. The first two we came to, and the ones we were most excited to see, were the rare plant houses. They were closed.

We soldiered on but quickly realized we needn't have worried. The other six houses contained so many gorgeous and bizarre plants and flowers that we completely forgot about the rare ones we missed the chance to see. There was a greenhouse devoted solely to carnivorous plants, which was not surprisingly full of bugs. This was due to the plants themselves, that attract insects through a variety of scents and secretions. We were lucky enough to witness a flytrap snap closed, catching an unsuspecting gnat. 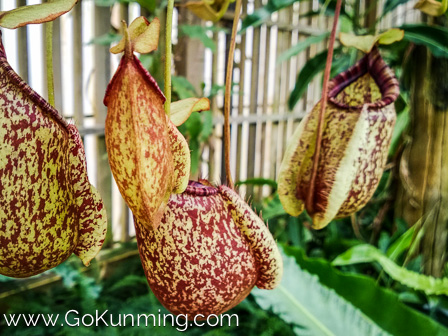 In quick succession we also walked through the aroid and bromeliad houses. Both contained profusions of magnificent flowering plants displaying almost every hue in the rainbow.

Throughout the botanical garden we had noticed and tried to appreciate the various smells we encountered. But the aromas emanating from these two buildings specifically were almost too much to comprehend. 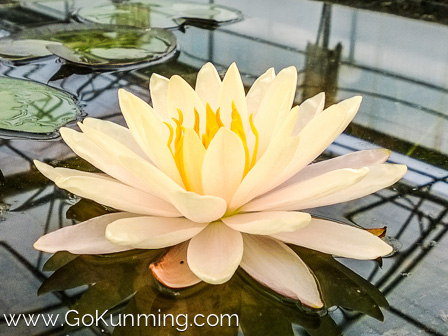 The remaining three greenhouses housed medicinal plants, lotuses and lilies, and variegated species. When we first walked into the lotus display our impression was one of disappointment. Low, water-filled concrete basins lined the walls and each one contained only a single plant sitting in seemingly stagnant water.

On closer inspection it dawned on us why these plants were displayed the way they were — no decoration was necessary as the flowers were simply breathtaking. Other buildings were crammed to bursting with lush greenery, but there in the lotus house the spartan surroundings only helped to enhance the beauty of the flowers. 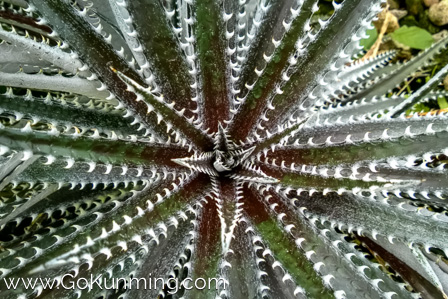 Moving on to the larger buildings, we entered the aquatic plants exhibition. It was a series of pools containing more than 100 species of plants adapted to life in the water. Perhaps the most surpirzing of these were the giant water lilies. Measuring nearly two meters across, the largest of these was also accompanied by a warning sign. Complete with a photo of a child sitting dry and fully supported by the plant, the warning advised visitors not to climb onto the lily pad.

Up next was the most stunning of all features we saw at the botanical garden. The orchid and fern house featured thousands of impossibly bright and detailed flowers in almost as many colors. Some of the flowers resembled spiders while others seemed to be as fragile and delicate as snowflakes. While we toured the different displays we had slowly acquired a following of Thai children. Several dozen elementary school kids were on what appeared to be a fairly unchaperoned field trip.

For the better part of an hour, the greenhouses had echoed with the shrieks of children playing. That all stopped when they entered the orchid house. Eyes widened and fingers pointed, but for the most part the kids marvelled in silence at the breathtaking surroundings. 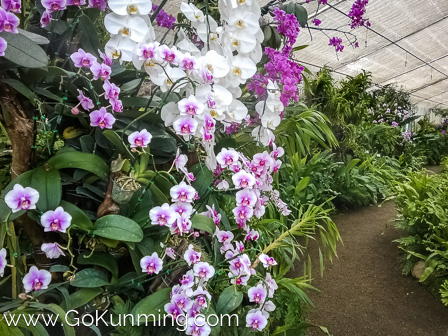 Once inside the four-storey enclosed rainforest the decibel levels of the children again skyrocketed. It was basically a very expensive and well-appointed playground. Catwalks and stairways encircle the forest and down at ground level ponds are crisscrossed by wooden plank walkways. In the center of everything is an eight-meter waterfall draped in dozens of species of ferns.

Windows at the top of the greenhouse were left open and birds and butterflies flitted through trees. We spotted a bat hanging upside down in one of the waterfall's crevices and pointed it out to some of the slower moving school kids. They were impressed. The final building in the complex is the arid house. Cacti and agave imported from Brazil, Mexico and Peru share space with succulents from all corners of Africa. We wondered how so many dry weather plants proliferated in the balmy Thai air.

Just as we finished our tour it began to rain. Despite the weather, we lamented that we had failed to pack a picnic. The botanical garden would have made an ideal place to spread a blanket on the ground, eat lunch and savor the amazing scenery. The Queen Sirikit Botanical Garden also supports an ecological research facility attached to Thailand's third largest herbarium and seed bank. There is also a Museum of Natural Science and an amazing orchid nursery. Tours for all of these attractions can be booked in advance by contacting botanical garden administrators.

For those wanting to hike, there are several minor trails we did not have time to explore. Of these, two of the more popular lead straight to scenic areas. One passes by a garden where only white-flowering plants are kept, while another meanders through forested hills and provides views of climbing and parasitic plants. Having lived on and off (mainly off!) in Chiang Mai since 2005, I have never been to these gardens because I did not know they were there. I have been to the top of Doi Suhket a few times, so must have driven past!
The pics are excellent and I will go next time I visit. There is also a big Garden dedicated to HM the KING at ground level, not far from the mountain and well worth a visit too!

Great article! Glad to hear you finally made it down to Chiang Mai Pat. I actually haven't been to this garden either but it looks amazing, will have to check it out next time for sure.