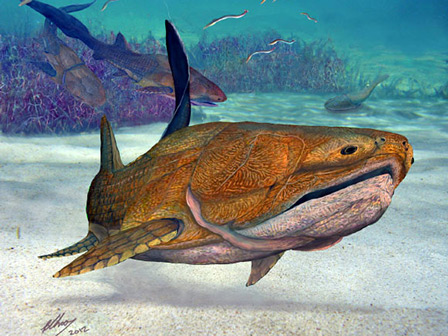 It sometimes appears the fossil cornucopia buried beneath Yunnan may be inexhaustible. In a paper published recently by the journal Nature, paleontologists working in the province describe what they believe is a missing evolutionary link explaining the origin of something we all take for granted — faces.

The fossil in question is that of a 419 million year-old fish that lived during the Silurian period. Previously unknown to paleontologists, the fish has been given the name Entelognathus primordialis by researchers who unearthed it near Qujing in eastern Yunnan.

The 20-centimeter long fish belongs to the now-extinct taxonomic class Placodermi — or 'plate-skinned'. These ancient fish were characterized by panels of bony, external armor and for roughly 50 million years were some of the most successful and abundant aquatic animals on earth.

The discovery of E primordialis is significant because the specimen is the first of its class to exhibit a jaw similar to that of present-day vertebrates. Previous scientific theories held that animals with modern jaws evolved from shark-like fish with cartilaginous skeletons, which at some point diverged into two groups — modern sharks and bony fish.

The international research team that discovered E primordialis was led by Dr Min Zhu of the Institute of Vertebrate Paleontology and Paleoanthropology, Chinese Academy of Sciences. He believes the fish represents a common ancestor to both sharks and bony fish. If proven correct, such a hypothesis would mean shark-like animals were not the first to develop modern jaws. It would also indicate sharks are younger, from an evolutionary standpoint, than previously thought.

The fossil was unearthed in 2010, but not considered to be of particular interest until it was re-examined a year later. It was then that researchers discovered they had found an intact, three-dimensional specimen that deserved further inspection.

Scientists not involved with the discovery of E primordialis are happy a more thorough investigation was undertaken. Professor of paleontology at Flinders University, John Long, characterized the find as equally important to those of Archaeopteryx and the australopithecine remains commonly referred to as Lucy.

E primordialis is another in a growing list of important evolutionary finds in Yunnan. These have included a 500 million year-old 'walking cactus' unearthed near Fuxian Lake, the remains of a giant mastodon found in Zhaotong and a possible new species of human uncovered in Jianshui last year.

how are the missionaries gonna explain that?

Another reason I don't eat fish in Kunming.

More unquestioned propaganda from the evolutionists ;)

Use of the word 'law' in scientific discussions is usually misinterpreted by many laymen, as well as (apparently) some scientists. Calling something a 'law' does not mean no doubt can arise concerning its validity (e.g.: Newton's various 'laws'). Science deals in theory and we deal in habit, but no one deals in certainty, except as (what psychological theory explains as) a psychological phenomenon, often associated with habit, and sometimes associated with revelations or satori. All theories, including that of the 'existence' or 'nonexistence' of God (questions which have nothing to do with science, despite the cries of Hawkins and the noisy new atheists), are open to revision and reinterpretation - sorry, but that's the best we can do.

More unquestioned propaganda from the evolutionists ;)

Wow, that's a loaded comment! Why, do you think?

My comment was intended to be tongue-in-cheek, following on from the discussion on the other thread recently about evolutionism. I was just saying, like Alien indicated above, that this is a theory not beyond doubt as to its validity, and open to revision and reinterpretation. Other forms of science are verified through experimentation and observation, but that does not apply to evolutionism, for which those methods are not available. Despite all of this, pronouncements by evolutionists seem to be treated unquestionedly as fact rather than speculation and interpretation.

Ok, I understand. Thanks for elaborating. But you used the word 'propaganda' so I was wondering if you felt there's another reason besides just churning out scientific papers to pay the bills and hold on to prestigious jobs that this theory continues to be propagated, despite what I agree is a theory that has never actually been proven. To me, propaganda often implies ulterior motives.

Being tongue-in-cheek I used the emotive term propaganda. If there were ulterior motives of evolutionists, it would be to claim they have through science "disproved" an alternative explanation of origins such as creationism, proponents of which do not usually purport to rely on science alone anyway. However as you agreed, even science has not proven evolutionism. Thus to claim that it has, doesn't that seem something like propaganda?

Yeah, propaganda possibly to discredit creationism. Who knows? Maybe they're genuinely convinced in their findings.

Yeah, maybe some are sincere, because they have already been brainwashed! :)

Ha haa, you guys are obviously fishing for comments from an "evolutionist" like me, the comments section of this article probably isn't the place to get into it.

Evolution, as you guys are defining it is a working theory that has some evidence for its proof. Unfortunately creationism has none, even though people like me wish that it did! It stands to reason that if you require proof for something, you are more likely to believe in evolution. If you only require faith for belief, then you are more likely to accept some form of creationism. The difference between why evolution gets more press (and hence you can claim propaganda) than creationism is that it's a continuous bible in progress. Everyone already knows the creation theory, which is why there isn't much press about it, it's yesterday's news. Claiming brainwashing either way is futility in action. We will only know who is brainwashed when one theory is thoroughly proven.

Evolutionism is not fully proven, yet many people still believe it. Belief without full proof is also faith! Just a thought.

There is no such thing as full proof in science, even the most concrete scientific facts aren't 100% unequivocal mostly because of time. In the current discussion, I remember reading that scientists are only around 95% sure about common descent, but they consider natural selection much closer to 100%. If you define faith as belief without full proof, then I agree completely. But I define faith in the belief of something in the absence of evidence, particularly contrary evidence.

I think creationists also claim some scientific proof for their position (presumably making different interpretations than evolutionists), but also relying upon more than science alone. Existence does not derive or consist of intellect alone, but also of the heart and the soul. Evolutionists usually do not comprehensively address existence in this way. Thus the theories have different purposes, so try and contrast them on a scientific basis alone (even when one cannot fully disprove the other anyway) is only looking at part of the picture. Apples and oranges.

blobbles, I'd like to suggest that perhaps both creationism and evolution are flawed or incomplete theories. It's not necessarily either/or just because those are the two options being presented and debated. Someone might come along with an entirely different theory some day and actually prove it. Just saying. At this point, neither can be proven. And Quester is right. Belief without proof is nothing more than faith.

blobbles has more or less got it, I think - the words 'proof' and 'fact' are all too often thrown around in a manner that suggests finality - and, perhaps, the end of thought. The problem with those who want to rely on 'faith' to show them 'truth' is that, if they let it in for creationism, then where does it stop? Are NO empirical evidence and NO logical analysis ever to be given any weight for anything? Such people should look at their own daily actions and realize that, in fact, they rely on empirical evidence and reasoning every day, and their basic religious faith does not get in the way - so why the big exception for evolutionism? And why can't they look at literature from the past (e.g., the Talmud/Old Testament) in the same light? I suggest the answer may have to do with fear, and I suggest they deal with it in the native human (perhaps God-given?) manner: by continuing to think.

All questions are still open.

Correction to the article: the probably new species of human (Red Deer Cave People) were found in caves some depth in to the mountains to the *south* of the Red River, significantly further east than Yuanyang and even Gejiu. This is not close to Jianshui at all. Even "Vietnamese border" would be a closer description.

I suppose there's still a outside chance that Thor is responsible for Thunder.

Just watched the film Prometheus. There's an outside chance that we're spawned from an alien race if you believe there's any validity to sci-fi.

Ah c'mon now religion was never supposed to be taken too serious. Some nice stories,some with a moral to help people fall asleep at night. My favourite one is the talking bush story or the one about the girl who fell into the rabbit hole. The latter was more credible.

Perhaps as credible as the fables of Piltdown Man & the brontosaurus, once purported to be true science ...