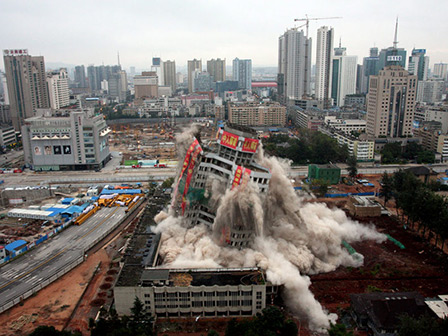 Another Spring City landmark has joined the growing list of places torn down to make way for new development. This past weekend a building, which once was the tallest in the province, was demolished with explosives.

Kunming's Workers' Cultural Palace (工人文化宫), formerly located in the city center in the middle of Dongfeng Square, was successfully imploded September 7 at seven in the morning. A reported 864 kilograms of explosives were used to demolish the 18-story building. The implosion of the seventy-meter structure took all of four seconds.

The Workers' Cultural Palace was originally built in 1952 and was rebuilt at a new location 30 years later. A much larger complex opened in 1985, featuring a set of four hexagonal towers. Each angle of these towers was said to represent one of the province's 24 minority group. The building became Yunnan's first high rise as well as the center of many Kunmingers' social lives.

The complex, of which the recently-demolished towers were part, contained a paved public square, open-air cinema, a rollerskating rink, a musical fountain and a revolving restaurant. The most popular feature following the building's inauguration, however, was its elevator — reportedly the first in the province. Riding the lift to the top floor became a common pastime as it offered unprecedented views and of the city. 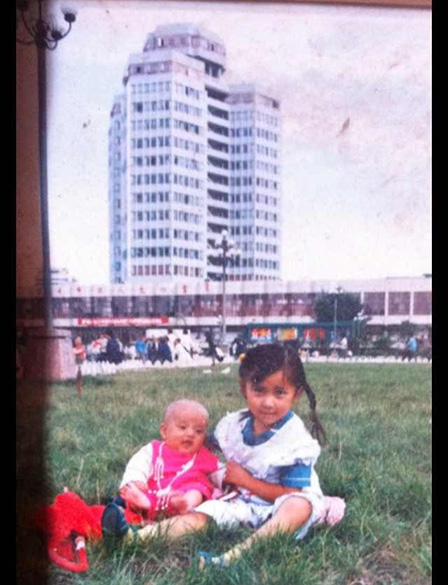 Following Saturday's demolition, the long process of tearing down several smaller buildings begins, as does the removal of an estimated 14,000 tons of rubble created by the implosion. Once cleared, the site will undergo construction of a 15,000 square meter public plaza flanked by retail space. The area may once again be home to the province's tallest building if plans and funding for a 456-meter skyscraper ever come together.

A new Workers' Cultural Palace is under construction on Renmin Dong Lu. Ground was broken in 2009 but due to a series of delays the building has still not been completed. Most recently the center was planned to open on the same day the old one was imploded. However, installation of the facility's outdoor granite flooring was not completed in time. The facility is now scheduled for completion by October.

:(
I used to work in a small and cute school located on the 5th floor.
Nothing last forever i guess ...

The building wasn't that old either. Just goes to show you the crap that China builds are not made to last. After 20 years, it's time to tear it down.

'the crap that China builds are not made to last' - perhaps an overstatement, and I don't think there was anything structurally wrong with the workers cultural palace. I always liked the building/institution because it represented something from the earlier heavy-'socialist' period that was not at all a bad idea - ie, we hear of the inefficiencies and over-the-top political campaigns etc. of that period all the time now, but it wasn't ALL bad. And now sometimes the baby goes out with the bath water (e.g., rural health arrangements, once based on scarcity of health facilities and personnel but with a real impetus for equality and decent across-the-board development).

Someone had to make money....

February 20, 2021 "The house locates in Jinghong, Xishuangbanna, not far from the airport JHG, in the zone of the Convalescent town, green trees and mountains you can en …"
Living in Kunming JanJal