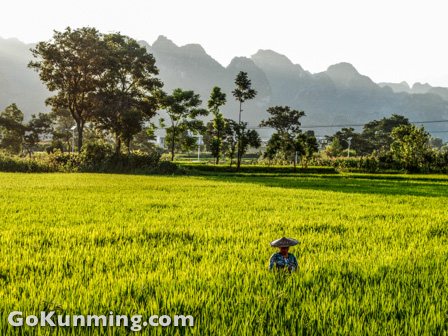 Located near where two of China's most naturally beautiful provinces share a border, Xingyi (兴义) is home to gorgeous Karst formations that are virtually free of tourists. The area rivals both Yunnan and Guizhou's more well-known, and some would say overdeveloped, tourist attractions, and is home to over 100 waterfalls.

Xingyi is a county-level city of Qianxinan (黔西南) autonomous prefecture in southwest Guizhou. The city itself is relatively uninteresting other than as a waypoint and its well-connected train station sits on a plateau 15 kilometers outside of town. 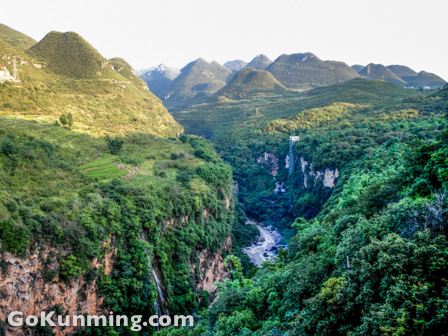 Maling River Gorge and its 100 waterfalls

Having taken bikes on the train we were able to ride away from the station and avoid the town entirely. From the road, a valley with stunning Karst peaks opened up before us and revealed a deep canyon cut by the Maling River (马岭河).

This scenic area of cliffs and waterfalls, just seven kilometers from the station, is called the Maling River Gorge (马岭河峡谷). It stretches for 15 kilometers and the river is often veiled in the mist from dozens of waterfalls. Features of dissolving limestone are common and varied in southern China's sprawling Karst formations. 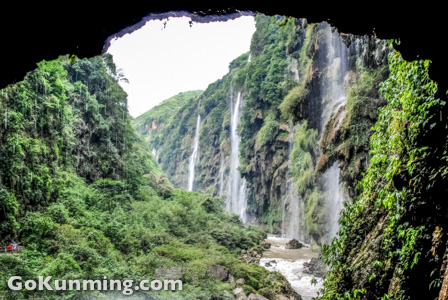 However, in the case of this gorge, it is believed the Maling River once flowed along a subterranean tunnel. Epochs of erosion caused a collapse of the porous rock ceiling and left giant blocks of limestone exposed to erosion by both the river and the elements.

Harder limestone and dolomite formations lining either side of the river channel have eroded more slowly over time, resulting in vertical cliffs over 200 meters high. Regular rainfall and high humidity have encouraged the growth of viney and clinging plants seemingly everywhere along the cliff walls. 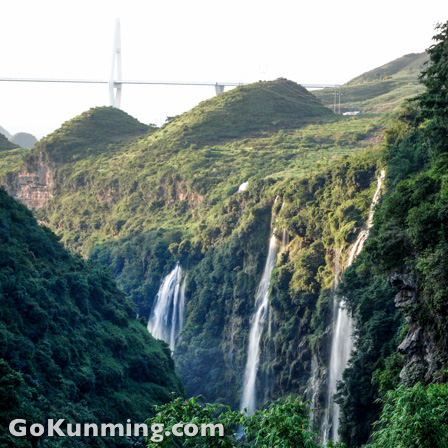 In the distance, the Baling River Bridge towers over the landscape.

All along the Maling River are fantastic vantage points from which to take in the grand spectacle. It is also impossible to miss one of the world's tallest highway spans when looking west. Part of the the Shantou to Kunming Expressway (汕昆高速公路), the colossal Maling River Bridge (马岭河大桥) has an enormous clearance of 241 meters and a suspended section more than a kilometer in length.

Next to a viewpoint punctuated by another, albeit smaller, bridge, are a ticket booth and secondary entrance to the gorge. Tickets at 80 yuan can be bought either here or at the main entrance a short way to the southwest. 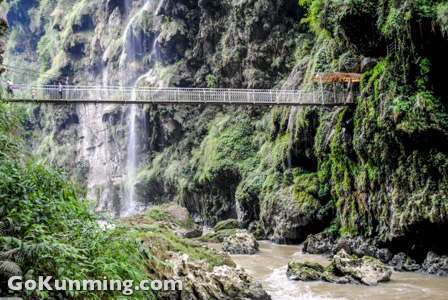 Stairways descend from both gates and lead wide pathways at the bottom of the gorge. The main entrance also boasts a strangely incongruous steel and glass elevator bolted to the cliffside. The opportunity to take this down to the river costs 30 yuan extra.

Trails on both sides of the gorge pass through tunnels and along interconnected balconies, giving way to various vantage points. Small suspension bridges crisscross the river and provide a loose walking circuit. Spray from the falls and springs running down the cliffs make the trails slippery in parts, especially during the rainy season. We were careful to watch our steps. 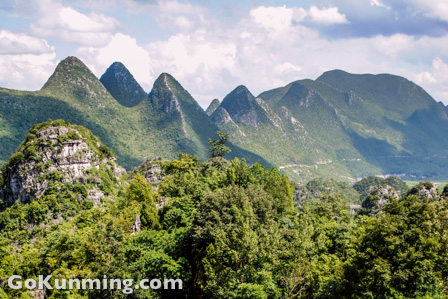 The Karst mountains of Wanfenglin

Further down the road lies the Wanfenglin (万峰林) — or the 'Forest of Ten Thousand Peaks'. This scenic area contains the vast majority of the county's cone Karst. It's 25 kilometers from the station and 18 kilometers on from Maling River Gorge. The way is clearly marked by large brown signs written in English indicating directions to the region's touring routes and photo hotspots.

Cone Karst is reminiscent of tower Karst, which is found in places such as Yangshuo (阳朔) in Guangxi. Both created in the same geomorphic process of slowly-dissolving limestone giving way to cone-shaped mini-mountains. The valley in Xingyi takes on different facets depending on the season and the crops being grown in the fields. 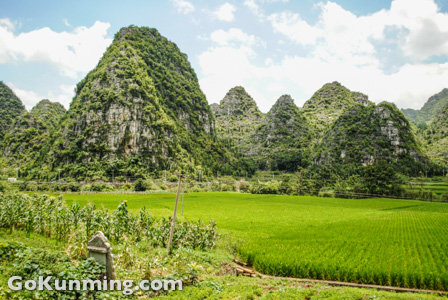 When we were there in summer, rice paddies lined by banana trees and sunflowers were dense with ripening grain. Corn was just as abundant as rice and often inter-planted in alternating terraces. Subtropical vegetation of low shrubs and vines clung to the steep sides of the limestone cones while ancient fig trees are often the centerpieces of the small hamlets along the river.

Wanfenglin has a cluster of guesthouses and restaurants near the park's entrance at the end of the main road. Strangely, many of these places do not often take advantage of the wonderful scenery and rooms that should include windows overlooking the mountains are absent. Further along the valley are scattered settlements with other opportunities for accommodation, as well as restaurants. 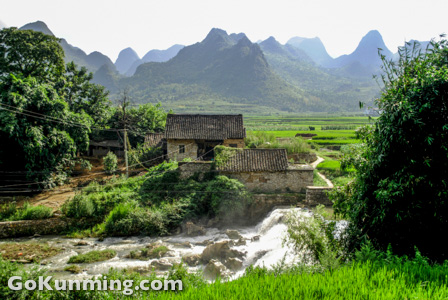 Buying an 80 yuan ticket at the entrance to Wanfenglin is not obligatory but does allow visitors to take advantage of safari buggies traveling along a high road 100 meters above the valley floor. Loudspeaker-toting guides point out the different features and explain the valley's different geological formations. The whirlwind buggy tours continue around the eastern side of the valley before looping back to the entrance.

In winter months be sure to take warm clothing as the vehicles are open on the sides. If cycling and taking it easy sounds like a better option, there are numerous places that rent bikes of varying sizes and designs near the park gate. 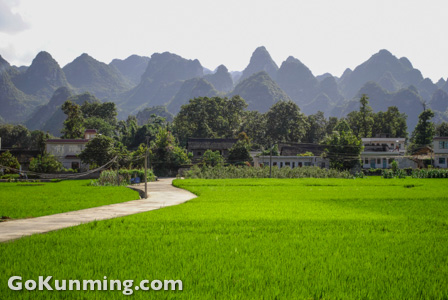 Pedal buggies for between two and six people cost 40 yuan for the day and bicycles vary in price, starting as low as 10 yuan. Be aware that other vehicles share the road and there are often significant drops from the roadside down to the irrigated fields below. Perhaps to be expected, the pavement is not lined with safety barriers.

The predominant minority living here are the Buyi (布依), who are related to the Zhuang (壮) —the largest minority group in China. Older architecture in the hamlets of the area are all made from rough-cut local limestone and are topped with slate or tile roofs. 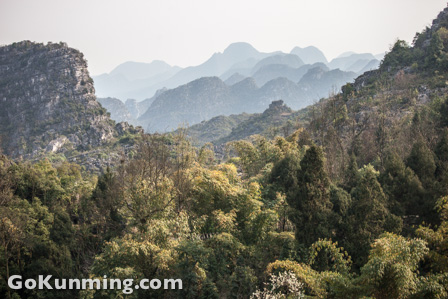 Traditionally built homes are quickly being replaced by more modern country houses with a heavy emphasis on the use of ceramic tiles and one-way glass. Roads climbing into the hills on the eastern side of the valley still have little hamlets in the older Buyi style and are undisturbed by traffic.

In the summer sun we saw many people taking advantage of the weather to dry chili peppers on the streets and in public courtyards. Most people were avoiding the midday heat by chatting or playing card games in the shade. One of the locals we met showed us his unusual roof top garden. In a place with very little flat land it made perfect sense that he and his neighbors often turned their rooftops into small irrigated rice paddies or corn fields. 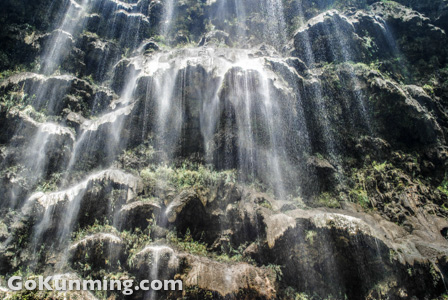 The easiest and most comfortable way to get to Xingyi from Kunming is by train. There are five scheduled daily. The 300-kilometer journey usually takes five hours but trains are often delayed. A hard sleeper costs 110 yuan each way and drops you at the station 15 kilometers northeast of Xingyi's town center. Near Maling River Gorge we chose to stay at Liu's Express Inn (利悠快捷酒店) on Kaifa Lu (开发路). A standard twin room has two double beds for 128 yuan per night. Rooms can be booked in advance by calling (0859)3388899.

In Wanfenglin accommodation choices are much more varied, ranging from guesthouses to luxury hotels. Basic doubles can be as inexpensive as 100 yuan per night with prices rising from there. If you look closely, you can see just how tall the waterfall is in comparison to people.

Nice work Ben. I've wondered about this area every time I've taken the train from Kunming to Guangzhou. I always keep my eyes open around 5:30 or 6 to make sure to catch a few seconds of the remarkably tall waterfalls on the east side as they catch the late afternoon sun... some of my favorite scenery in southwest China. Will go there next time I'm passing through - thanks for scoping it out first!

That bridge made me think of what other high bridges there are so looked it up on wikipedia:

Amazing how much representation China has on the list!

Can anyone give any lat:long so that i can find this on GoogleEarth, or road directions, please?

Those coordinates brought me to Luoping city...???..

Maybe you can post the link to the photos

we are passing by in June, how much time we need minimal for Xingyi including surroundings?

We are heading to XingYi in a few days - can anyone recommend a local guide and/or driver who might be willing to take us out on a few day trips ?

Don't take the electric buggies at Wanfenglin, that's the mistake we made! They just whizz you around on a quick loop at extortionate cost. Hire a bike and you can explore where you want at your own pace.

Probably one of the most genuinely peaceful places I've visited in China. Lake Hanas (Kanas) and surrounding area of northern Xinjiang was another.