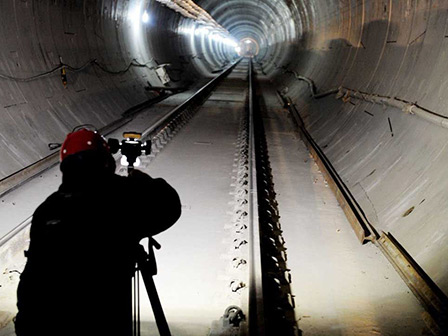 Kunming's under-construction metro has caused headaches for anyone trying to get around in the Spring City. The biggest headaches, however, now seem reserved for the accountants and bureaucrats in charge of finding funds for the massive undertaking. According to an article originally published in the online magazine Moneyweek, the metro project — still years from completion — is already billions of yuan in debt.

The Kunming Bureau of Finance conducted an audit of the metro scheme earlier this month. It found that due to cost overruns, delays and added transit lines, metro expenditures could now balloon to as much as 300 billion yuan (US$49 billion). When construction on the project began in 2010 the announced price tag was 35 billion yuan (US$5.7 billion).

To put the new estimated costs into perspective, the city's total income for fiscal year 2012 was 37.8 billion yuan (US$6.2 billion). Using these numbers alone, Kunming would have to spend every fen of its income over the next eight years simply to pay for its metro lines.

Fortunately for the city, the major loans it has secured through the China Development Bank include 25-year loan terms with five-year grace periods. Those loans, secured in 2009, total roughly 41.5 billion yuan (US$6.8 billion) with another ten billion in aid coming from Beijing.

Earlier this year 63.5 billion yuan (US$10.5 billion) was allocated for further metro and rail construction by the National Development and Reform Commission, of which 40 percent is already held as capital. The remaining 60 percent is expected to be provided by further bank loans. These numbers constitute secured funding of 115 billion yuan (US$18.8 billion).

The Kunming metro financing analysis comes just one week after Beijing ordered the commencement of a nationwide review of municipal debt. The national audit is coupled with a ban on the construction of new government buildings — both spurred by international credit agencies announcing China's cities could be underwater to the combined tune of US$3 trillion.

If the true price of Kunming's metro is anywhere near 300 billion yuan, mention of where the remaining 185 billion yuan (US$30.3 billion) will be generated has not been made. It may be time for the Spring City and Yunnan to consider something novel, such as restructuring shaky public bond markets.

And we must remember how much of the 562km will be above ground, probably 300km of it, hence much cheaper.

If they can't build it for about 2/3 the price of Spain, I would be very surprised. Say it cost 40 million per km the end price of 562km would be about 22.5 billion.

I'm sure there are a lot of under the table things going on with these company. Bribes and guanxi and lavish gifts.

I wonder how much damage was done to the Metro construction during the flooding?

I also wonder how much of the materials used is inferior to save money or to line the pockets of the officials.

I would not expect Kunming City to be on the hook for repaying the loans. More likely, one or several entities have been set to borrow the money and operate the subway. In Beijing, a line could be operated by a company. So Line 1 might be operated by "KM Metro Line 1 Company", and so on.

But the more interesting way to look at how the loans will be serviced is looking at required riders. The operating company has two sources of revenue, riders or operating revenue and advertising. In Beijing some lines lose money operating but adverts are enough to let them be profitable.

In the aggregate, loans totaling 300 Billion yuan, for 30 years, at say 3.0% interest, would require about 15 Billion yuan in yearly payments on a fully amortized basis. If operating expenses are 100 million yuan per day, it would take more than 140 million riders per week at 2 yuan to break even.

How many people live in Kunming?

Anyway, you can expect to see lots of advertising in the Metro.

If they worry about cost, and only provide minimum service until things pay for themselves, then they will always be in a debt cycle. For example, if the service only runs the cheapest (minimal) service from 9-5 people cannot possibly use it for work. They screw themselves.

There is a real need to bite the bullet. Then the best returns can be realised, only if they take the risk and run the service as a viable alternative to driving. Short term loss will be high, but utilisation will follow very quickly.

There is a need to follow the models of service provision in Shanghai and Beijing, but accept that the break even point in Kunming will take longer to realise. However, if you don't, the losses will continue for many years.

The Economist argued cities like Kunming have little to no need for a metro system. I originally mocked them for not knowing Kunming's worst traffic situation. But I later understood: a Bus Rapid Transit system would be a lot faster, easier and cheaper to install, maintain and operate in a city like Kunming. Prestige projects like a metro system are nonsense in Kunming.

Yes, BRT in Kunming would be a much better option.

Someone had to make money....

They would never have begun building the metro unless they knew that they will be making a profit. They do make a profit and the profit will only grow more with time.

Many public infrastructure projects around the world are unprofitable. Take for example the American interstate highway system. These projects become valuable when the positive externalities of the project (increased commerce, improved social welfare, etc.) outweigh the burden on government coffers and taxpayers.

As far as the debt issue, it seems clear that there is going to have to be some manner of bailout by Beijing of overburdened provincial and municipal governments in the medium to long term. The big question is whether Beijing has a plan to deal with this, or have they simply gone on an irresponsible unsustainable infrastructure spending binge and hidden the expense of it on local government balance sheets? I imagine we won't know the answer to that right up until the point when the shit hits the fan...or doesn't.

I smell Beijing printing money for bailing out local government. Why not? The increased inflation only affects the poor, and Beijings attitude towards them tends to be "screw 'em". Besides, it will devalue the yuan more, meaning less factories leaving China and higher GDP figures. Let the race to the bottom continue!

You are seriously wrong in thinking "They would have never begun... unless they knew...." First of all, the Metro is a prestige project which immediately puts "profit" on a remote back burner out of sight never to be seriously considered. The "profit" in this type of project in the construction, materials and labor so all that money only exists if the thing is built.

The process of calculating either payback, ROI, or even profit is a pretty straight forward.Usually, they do a NPV (Net Present Value) calculation based on a myriad of assumptions, guesses, wishes and a few facts. As all of these things are also based on an additional myriad of assumptions, guesses, wishes and a few facts. One key component is "ridership" which is a guess, usually a well calculated, detailed SWAG (Scientific Wild Assed Guess) but a guess nonetheless. Not to bore the analytically challenged each guess in this pile of guesses, and a few facts, has a range, low to high. The guy who cranks the algorithm knows what the Boss wants so will skew all the little guesses to ensure the big final guess gives the Boss what he/they want. They want a subway. The subway will be justified with numbers. My favorite BS component is "contribution to the general economic growth of _____." You can fill in the location, Kunming, Yunnan or California.

Note: This is not a Chinese thing. This has been going on in the U.S. for a long time.

The metro will be a great thing but it's certainly going to cost - even better than the bus system, which was an excellent supplement to the bicycles before everybody started buying cars. The point is less that the metro will be good than that the automobile population is bad.

Much of modernity is seriously warped, and everybody wants to get in it and proudly make the same mistakes previously made by others. It's profitable too - for some.