Homebrewed beer just outside of Kunming 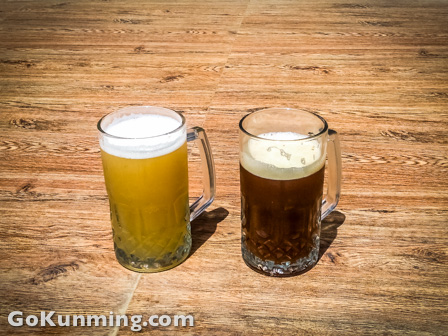 Sitting around the office the other day, we found ourselves wistfully staring out the windows at a blue sky flecked with clouds. After a bit of thought, we concluded it was time to get out and enjoy the day, preferably with a cold beer. It wasn't any beer we wanted. What repeatedly came to mind was a pint of something poured fresh out of the tap, preferably made by hand.

It was a tall order to be sure, and the only place that immediately suggested itself was the Bad Monkey. Unfortunately, a leisurely four-day bike trip to Dali was not exactly what we had imagined. Then we recalled having heard tell of a chicken hotpot restaurant in the hills outside of Kunming that was rumored to be brewing its own beer. Hopping on our bikes, we set out to search for it.

Leaving from near Yunnan Normal University we rolled through semi-tolerable traffic north up Longquan Lu until reaching Baiyun Lu and taking a right. After alomst three kilometers the road intersected with Chuanjin Lu, where we turned left, pointed in the direction of Jindian Reservoir (金殿水库). 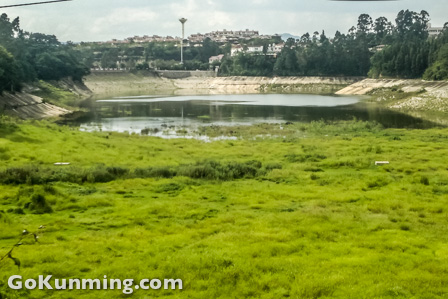 Traffic slowly thinned as we headed northeast. Twenty minutes later we arrived at the reservoir and were somewhat surprised to find water levels still extremely low despite the recent deluge that had flooded so many parts of the city.

We headed up into the hills, with the reservoir on our left, and were reminded once again of how easy it can be to leave the cacophonous traffic of Kunming behind with just a bit of effort. Following County Road 004 (004县道), we passed through forests comprised of that quintessentially strange Yunnan mix of bamboo, cedar, eucalyptus, pine and rhododendron.

The road climbed through forested areas until it levelled out and crossed a bridge over a six lane highway. Shortly after the bridge we veered right at a fork in the road and passed under a large red gate. Less than half a kilometer later the road forked again and we took another right. We rode through the tiny village of Zhujiashan Cun (朱家山村) and stopped at a T-intersection. 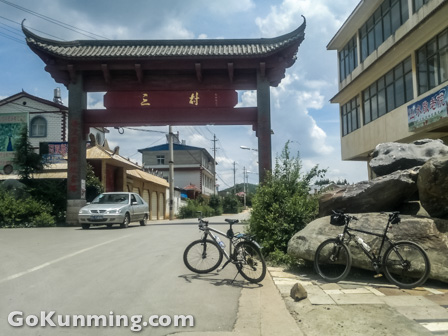 The road leads steeply up a hill to the left, but a conveniently-placed yellow sign for the Purple Cloud Fire Pit and Beer Manor (紫云火塘啤酒农庄) pointed us to the right down a quickly-sloping concrete road.

We rolled into our destination moments later, parched and intrigued. A cobblestone path led from the restaurant gate past a long building. At the end of the building three men lounged in shaded chairs. Following a quick conversation of introduction they led us into a darkened room smelling of wet grain.

A simple low refrigerator sat in the corner with three beer taps mounted to the top. We had two choices the owner announced — one light, one dark. We ordered both and found a place to sit in the sun. 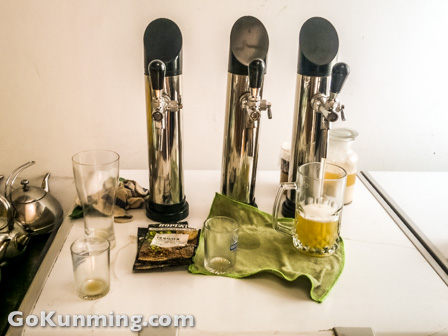 The beers arrived in glass mugs roughly the size of a pint. The light draught was a cloudy yellow the color of not quite ripe corn. The darker beer was caramel colored and had a healthy head of foam. Before taking a sip we checked out what sort of aromas were emanating from our glasses.

The pale beer's bouquet had definite hints of citrus and something else we couldn't identify until we took a sip. Although the fruit notes dominated the taste on the tongue, there were also suggestions of hemp seeds. We focused next on the darker beer, which had a distinctly malty flavor. It tasted a bit like a German dunkel but that comparison is not quite equivalent because no wheat was used to brew it.

Both beers were technically ales because of their ingredients, although very different cousins indeed. For someone accustomed only to bottled lagers these two drinks may appear strange. They were both a bit chewy — meaning although they have been filtered, much of the sediment left over from the brewing process remained in the body of the beer. 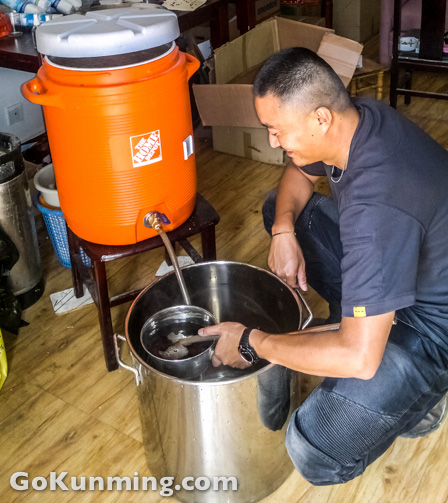 We had little chance to speak with the man responsible for brewing our lovely drinks, Yang Enze (扬恩泽). He was busy cooking up a new batch of beer, tending a slowly boiling pot of mash. We did discover that we had shown up on one of the few days a month when Yang does brew.

Later, back in Kunming, we spoke with Kendall Miller. He and three friends have been brewing at their apartment for a few years and introduced Yang to the idea of homebrew. He ran with it, sourcing malted barley and yeast, and, with the help of his friends, finding all the equipment necessary to make beer.

Miller told us there was also the consideration of what kind of water to use. Yang and his friends compared similar beers brewed with tap water, bottled water and water from a well on the grounds of the hotpot restaurant. According to Miller, it was no contest. The well water yielded a significantly better tasting beer. 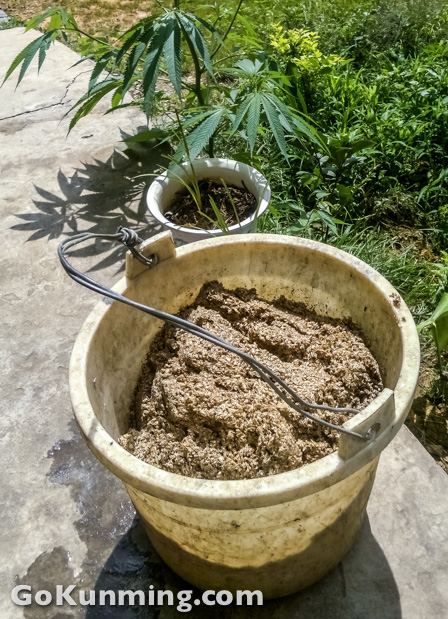 At the restaurant we ordered one more beer and watched Yang and some of his employees draining the wort before they added — or pitched — the yeast to got the beer brewing in earnest. The process was all completed by hand and on quite a small scale. The beer they were brewing during our visit would probably come to no more than 20 or 30 liters.

Yang has plans to expand his business and construct a building separate from the restaurant, dedicated specifically to brewing. Until then, his small batch beers are a great reward after cycling on a sunny afternoon. We finished our beers, said our goodbyes and headed reluctantly back down the hill toward Kunming, vowing to return for the hotpot, and of course more homebrew.

For those driving or cycling, the trip is roughly 20 kilometers and the directions in the article should suffice. Buses will also get you relatively close. Take bus number 10 northeast from the city center until it reaches the Jindian Daba stop (金殿大坝站). There you can transfer to bus number 147, which heads up into the mountains. Get off at the Lüyingdi (绿营地) stop. From there walk uphill until you reach the gate pictured above and follow the directions from the article. The walk to the restaurant should be just under two kilometers. 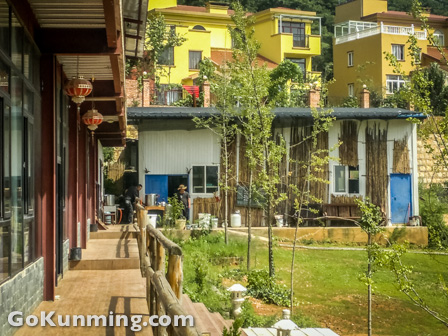 That's a suspicious looking potted plant in the sixth photo.......Good article, I'll have to make my way there sooner or later.

Good story
I definitely wanna check this out!

does that park at the end of the 10 bus line have a name or a GoK write up? I think that could be a nice day to combine the two, though I haven't been to that park in a while. I seem to remember a flying tiger museum up there too or am I making that up?

I have been there twice and the roasted leg of lamb is amazing....and I normally hate lamb.

Do they actually use the 麻籽 in the brewing?

Was here today, just had the beer and it was great! Not the best i have had...but for Kunming, i am super happy to have this place!
The directions are a little wrong, First drive through the red gate (pictured) THEN drive over the bridge(over the highway) then when you come to the T take a right...go straight until you see a sign!

I asked and no reefer goes in the brew! haha although there is a couple plants on the grounds!

How long has this place been brewing beer?
Very cool. Thanks for finding this and writing it up.

I've been cycling up here a lot but am ashamed to admit I still don't really understand the directions. Does anybody have GPS coordinates?

I haven't been to the brewery, but I have cycled past and thru the gate often. GPS for gate is:

Some clean air and nice views up there, especially once past the gate and on the overpass over the expressway. However, the brewery must be before that from the directions after passing the gate in the article.

Its not ...read my post ...The directions in the article are wrong.

I made the trip up there last month—glad I found a cool road back from the area or would've considered the trip a bust.

The beer was definitely not the highlight of that trip. After riding all that way, I was expecting to sit down to a decent beer and lamb barbeque—didn't get either. Apparently, the only thing they had (that day) was hot pot, and anyone who rides knows questionable oily soup and a bumpy road don't mix. So, out of a meal.

Beer it is! We received a cold glass of what could be mistaken as a mud milkshake (only 'black beer' that day too). Not sure what process the guy is using, but yeast was churned up throughout the beer (his CO2 must have not been tuned correctly because it took him a while to get a decent pint poured).

The taste was OK considering all the yeast that was in it, but it did give my stomach a little rumble as I rode off (maybe it was my empty stomach but beer yeast can give diarrhea). Good thing the meal we finally were able to have at another nongjiale quieted it down.

Overall, very glad someone is brewing beer..BUT, in typical Yunnan fashion, sanitation of the brewing area was questionable at best and the place had this weird "maybe this is more than just a majang nongjiale with young girls" vibe if you catch my drift.

Perhaps going there on a Monday afternoon is not the best time to go, but don't think I'll be joining their beer of the month club any time soon.

Sorry for the long post, but did not have the same great experience there as others have had. And, I don't want to discourage anyone either—was just one experience but maybe can give more balanced expectations. Maybe you'll have a good meal/beer...