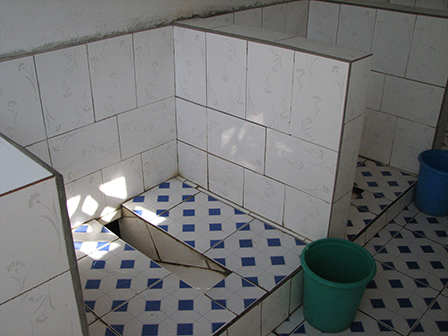 Yunnan governor Li Jiheng (李纪恒) voiced his concern over the cleanliness of the province's roadside restrooms at a government meeting earlier this week. Using an unusually critical tone, Li characterized the conditions of highway gas station bathrooms as filthy and unsanitary.

Li made the comments in Mengzi (蒙自), where he was attending a conference regarding rural development. His remarks, which appeared to be off the cuff, included the statement: "Hygiene levels in the bathrooms along Yunnan's highways are the worst in the entire country."

The governor then related a personal anecdote about traveling by car in the province. Li said he had stopped to use a public toilet while on a trip and was horrified when the smell of the restroom clung to his clothes for hours after he had departed.

Li went on to describe many highway bathrooms as unhealthy and malodorous. He also said the attitudes of bathroom cleaning workers were often, perhaps unsurprisingly, "not good".

That roadside restrooms in Yunnan would come under criticism will not be shocking to anyone who has travelled the province by bicycle, bus or car. Facilities are often makeshift affairs unconnected to sewer lines or running water. Some are no more than open pits lined by small walls.

In response to the governor's remarks the provincial government has earmarked 500 million yuan (US$81 million) over the next four years for rural sewer construction. The money will be used to match funds raised locally to build wastewater disposal systems.

The move appears to echo a public bathroom remediation program started last year in Kunming. Beginning November 2012, all public bathrooms in the Spring City were to undergo renovations to bring them up to new standardized codes of sanitation.

The bathroom in the photo is clean enough to eat your dinner off!
Was it taken in another province? I recall the public facilities about half way between KM and Dali used to be particularly pungent in the hot summer months. Hopefully they'll be top of the list.

They will be high anyway.

Education is required here. There are many things they can do to clean the public toilets up and keep them clean. Top of the list is that workers must be trained to:
1) stop using toilet water to clean the floors
2) use disinfectant solutions to clean
3) install washroom basins for the sole purpose of washing out mops and pails, and storing cleaning solutions
4) stop using the Western toilet stalls for storage of mops and the Western toilets to clean the mops, and keep them fully operational for seniors and handicapped person or others who aren't able to squat

Agree with Chingis, that's one of the cleaner ones I've seen. It's not just highway toilets. The public crapper on the corner of WLJ and WHX is one of the nastiest around.

Main problem is that people don't know they have to flush. They grew up in a place with only a septic pit so they forget about it. Then no one wants to clean up afterwards and the whole cycle (no pun intended) continues.

I think most public facilities in Kunming are actually alright, including the one on wenlin jie. It gets a lot worse on the highways. Although I may want to make an exception for the one nearby Nordica on a bad day.

They know how to flush, they just don't want to because the toilet is a dirty place. Self fulfilling cycle. But hey! it then becomes someone elses problem.

Agree with the Gov, that the loo's along the highway are disgusting, but nothing compared to the toilet in Dounan Flower market! the guy grinned at me when i paid my 1 rmb for the tissue, i know now why!!!

In my experiment, one most annoying with chinese toilets,not considering the life and death of animals or products, is the mass attention and comments.

Is again for me the sign of hungry ghosts origin or destination. I maybe one rare veget aryan around here, yet to become a shenme in the "ta zai gan shenme" when i am at toilets seem really insane.

I guess is part of the reification of many natures such as animals. Just a show to consume,not a living being with feeling and suffering.

Bathrooms in Yunnan are crazy horrendous! But highway pissers near Beijing are just as bad! and when you get into Mongolia it may be worse! In the golia. I once witnessed a block of frozen piss the size of a vw van! not to mention the number 2! hahahah

Gumpo, What are you talking about!!!??? "hungry ghosts" hahahah ....Might be time to start your meds again!

This is not only a chinese problem.
I travelled in many European countries, as well as USA.
Books could be written about this issue, and photos to illustrate.
A lot of toilets around the world are worse than the dirtiest pigsty.

The worst I've seen? maggots crawling out of the entrance.

I actually think there are some pretty posh shit houses along the highways. Then when the road narrows, it gets less hygienic. Just only touch the place with the soles of your feet and get it over with. And make sure you don't drop your phone. The only thing I can't take (worse then maggots trying to climb onto your feet) is that some places are "cleaned" with ammonia and I can't stand its excruciating smell.

Visited one just over the border in Guizhou. The pans had not been flushed and there were piles of poop. There was a matong (a sitter shiter) but it was smashed, like have the bowl was gone and jagged edges. No seat (obviously) and it had been used. Build up of green gunk on the porcelain suggest a time lag since any real cleaning had been done.

I think the governer will be regretting his off hand remark, not realising it would go on record.

What ever happened to the 2 flies rule?

Some people do have their own agenda. Generally vegetarians produce more greenhouse gasses than omnivores.

Whilst it is pretty much completely false that vegetarians produce more greenhouse gases than omnivores, quite the opposite,

it is my experience that vegetarians farts are significantly smellier than meat eaters.

And the idea is to make things better not worse right?

As a demi-tarian, I must confess that I do seem to fart more on my veggie days.

Actually, I hardly ever fart anymore since I've learned to avoid certain food combinations and certain foods altogether. If you eat something and fart, it's probably a sign that you shouldn't be eating it (too often, anyway).

Cruciferous vegetables.
Good for the heart,
The more you eat,
the more you......