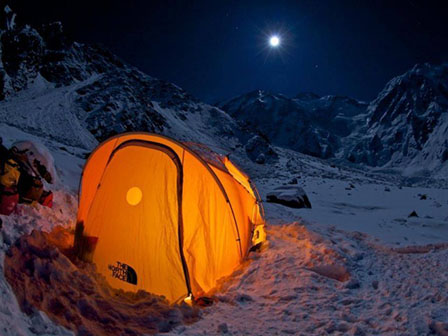 Basecamp on Nanga Parbat in Pakistan, where 11 alpinists were murdered on June 23

In a shocking nighttime raid, armed men posing as paramilitary officers executed ten foreign mountaineers and their guide in the Pakistani Himalayas. Zhang Jingchuan (张京川), an accomplished mountain climber from Yunnan, was the only person to survive the attack.

The alpinists were bivouacked at basecamp on Nanga Parbat — the ninth tallest mountain in the world — when the assault began. The gunmen arrived at the camp around 1am, posing as Gilgit Scouts and demanded to see the climbers' passports. When the mountaineers emerged from their quarters they were systematically shot down.

Of the 11 people killed, two were Chinese nationals, including Rao Jianfeng (饶剑峰) from Shenzhen. Earlier this year he won China's Golden Rhinoceros Award, given annually to the country's most accomplished outdoorsman.

Yang Chunfeng (杨春风) from Xinjiang was also killed. He was attempting to climb all 14 mountains in the world with elevations greater than 8,000 meters. Zhang, the third Chinese man in the climbing party, escaped the assault. Details on how Zhang managed to evade the gunmen have still not been made clear. 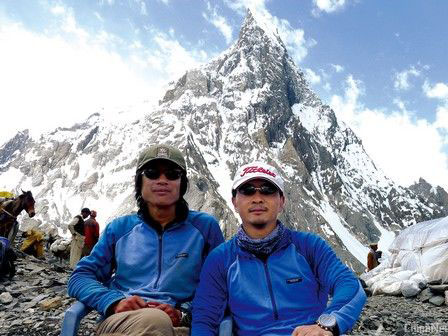 Zhang fled the scene and called an associate in Kunming, asking her to contact the Chinese embassy in Islamabad. Once the embassy had been notified, Pakistani soldiers were dispatched to basecamp via helicopter. There they discovered the murdered climbers and rescued Zhang — who had spent 12 hours in the mountains alone and without supplies.

After news of the the story broke in the Pakistani press, a militant Islamic organization claimed responsibility for the attacks. The group, Jundul Hafsa, which has ties to the Taliban, said in an statement the killings were retaliation for United States drone strikes inside Pakistan. As of this writing, Pakistani police have arrested 37 suspects believed to have links to the shootings.

The Pakistani Foreign Ministry characterized the attack as an attempt to "disrupt the growing relations of Pakistan with China and other friendly countries." The same statement said in part that Pakistan was doing everything possible to ensure the safety of foreigners inside its borders.

Foreign nationals from Nepal, Ukraine and the United States were also killed in the attacks. The mountaineers were attempting to summit the 8,126-meter mountain, considered one of the most technically challenging climbs in the world. They were resting for a day at basecamp, itself nearly 5,000 meters above sea level, before making the push for a final ascent.

Some people never learn. It reminds me of when Americans go hiking near or in North Korea and get caught and imprisoned. What do you expect from these regions. It's highly dangerous. It's like playing Russian roulette.

Which regions are 'these regions'?

All of this and more to come is a direct result of the chaos the USA is creating all over the world. The world can never have peace as long as the west continues to murder in the name of democracy. Look at how good life is here in China, a communist country.

Yeah, thank God nobody, least of all China, killed anyone in the name of Communism!
I'm actually in Urumqi, and lived here during the 2009 riot in which hundreds were slaughtered. If you had told me then "how good life is here in China" I wouldve choked on my kebab.

Hey liuming, am I too stupid to learn by living here, or does this not count as one of "these regions"?

Comparing Pakistan and China is like comparing apple and oranges.

I feel this should not be about politics! The facts are some people,(unarmed people) whatever country they may be from. Went mountain climbing..and were gunned down by pussies, most likely brainwashed into hating something they don't understand. To blame America or China OR Pakistan for that matter...for the actions of some terrorists is giving them(the gunmen) exactly what they want!

This appears to be a politically motivated crime. How can it not be about politics?

"I Feel" ... It is most definitely political!(in the minds of the shooters) But, putting the blame on anyone but the people who did the crime is what terrorists want!

I will be the first to say that the governments of the before mentioned countries are pretty bad, maybe even evil! But ..BUT, to make this political gives the terror group that did the crime political power!! They should be treated like criminals, nothing more! catch them and (in my opinion) kill them, if they are guilty!

This reaction is because of USA...If you kill innocent people with drones then this kind of events will happened

What if you kill guilty people with drones?

Also, according to the CNN article I read, only one of the climbers was from the USA and he was Chinese-American. This is one of the most ridiculous crimes I've read about. Not only was only one guy American, 5000 meters is a pretty extreme place to go hunting for tourists. I hope they catch those murderers and quick. Maybe they'll be extradited to China for some punishment.

An eye for an eye leaves us all blind—Gandi

Shooting unarmed adventurers is not a reaction to what a government does...Its self-serving for sure! $h@k23—thats a stupid thing to say!! What if somebody killed your parents because of something somebody else did?

hahha,, i do see the irony of my gandi quote and Kill them comment! I guess i mean ......these people(terrorists) don't see the difference between justice and murder... If the USA killed innocent people i hope those people will get justice.. but that is not the point.. this is about these particular victims...I hope they get justice! And there murders are not pinned on anyone\county else!

That's what is happening to people who were killed in drone's attacks... off course if they will kill innocent people without any reason they will do the same...and that's not stupid it's the reality

I also feel sorry for the victims but I am not saying this is right...I am just mentioning the cause of this incident

Good to know you're not speculating $h.... If this is what happens when "you kill innocent people with drones" then why did similar events occur before the US deployed and used drones?

Why are you so sure its "drone- specific"?

There can be other reasons but drones can be one of them.

Drones? How about the last 60+ plus years of murder and mayhem. Take your pick - Iran in 1950s, Nicaragua, Chile, Iraq 1990s, again in 2002, Afghanistan, Lybia, now Syria. The list is endless. All provoked by the USA and western allies, not in defense of anything - plain and simple - the aggressor.

I agree. The USA is the biggest mafia. Talk about 黑的政府. They are the biggest bully. They criticize other nations of human rights violations and they are the biggest violators of it themselves. Getting back on point. It's not wise to go mountain trekking in area that are hotspots. You're just asking for it. It's like going swimming where you know there are sharks. Chances are you will get bitten by one.

So, you're saying 'the USA' is responsible for all 'the murder and mayhem'? Who's 'the USA'? Who's forcing anyone to kill anyone else?

Modern nationalism is a manipulative ideology to manage global capital, and nationalist blindness to actual human beings leads to the punishment of innocents. China is not a communist country. People who murder in Pakistan cannot be extradited to China to be judged for murders of people in Pakistan, even if they're Chinese.

China did get Mr Kham and his gang to attend a court in Kunming for murders of Chinese in other countries.

"Comparing Pakistan and China is like comparing apple and oranges."

The riots happened at around 6 a.m. in Lukqun township of Shanshan County in Turpan Prefecture.

Knife-wielding mobs attacked the township's police stations, the local government building and a construction site, stabbing at people and setting fire to police cars, officials with Xinjiang's regional committee of the Communist Party of China confirmed.

Seventeen people had been killed — including nine policemen or security guards and eight civilians — before police opened fire and shot dead 10 rioters, the officials said on condition of anonymity.

Three rioters were seized at the scene and police were chasing those who had fled, the officials said without clarifying how many were at large.

Three people were injured by the mobs and were being treated at a local hospital.

Police have launched an investigation."