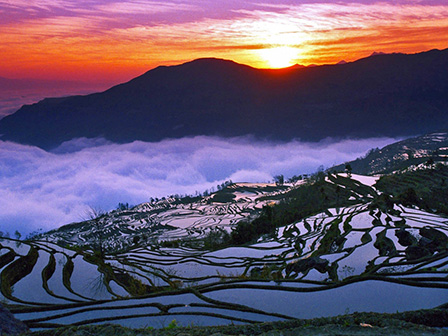 The rice terraces of Yuanyang (元阳), which have been under continuous cultivation for thirteen centuries, were officially granted World Heritage status on June 22. The mountainous paddy fields in southeast Yunnan became the fifth such area to be recognized in the province.

The rice terraces in Yuanyang were originally constructed and are predominantly maintained by the Hani minority. They were recognized largely because they are exemplary of a distinctive indigenous culture and its traditional technology. According to the 21-member World Heritage Committee, the area represents "a unique or exceptional testimony to a cultural tradition or to a civilization which is living or which has disappeared". 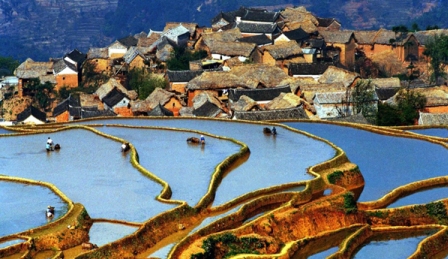 The hillside paddies, also referred to as the Hani Terraces, span 13,190 hectares and are home to 80,000 people from the seven ethnic groups. For centuries the inhabitants of this area have farmed the 2,000-meter mountainsides, which are sometimes perched on 45-degree slopes. Over the course of their history, the fields have produced an estimated one thousand different strains of rice.

Once a site has been recognized by UNESCO a country can apply for preservation funds. These may be necessary in the case of the Hani Terraces as they are plagued by an invasive species of crayfish that threaten the structural integrity of the earthen dikes comprising the paddies.

Yunnan has two other sites on the UNESCO World Heritage Tentative List — which means they can be put up for consideration by the UNESCO committee. These include the Dali Cangshan Mountain and Erhai Lake Scenic Spot and the Jingmai Ancient Tea Gardens in Pu'er.

Its too bad, While i am sure UNESCO does good things and preserves as best they can. Ultimately its a death sentence.

I agree! I still dont understand the pyramid with capstone located at the UNESCO site in Chengjiang.

The crayfish may destroy them before the Han get a chance.

Does that mean that there will now follow some unbridled terrace building and exploiting, even to the furthest mountain tops where the Hani have so far kept their hands off (in keeping with their own legend and pure logic, which says that everything will die if they deforest the mountain tops).

Probably. Sad. Hopefully UNESCO shows a little more guts in this matter than in the case of Lijiang.

UNESCO is threatening to remove Yunnan's Three Parallel Gorges UNESCO world heritage status if China goes ahead with its plans to dam the hell out of the Nujiang and Lancangjiang.

Looks like the dams are definitely happening. Whether UNESCO decides whether to actually follow through with removing the world heritage status or not remains to be seen. If they do, then that's some pretty big guts there.

I've got nothing against Yuanyang, but I always thought it was kind of funny that Yuanyang and Yuanyang alone gets all the fame for the terraces (at least in Yunnan. I know Guangx's Longji terraces are also famous). The fact is, terraces can more or less be found ANYWHERE in Yunnan with mountains and farmers in the same place. There's no need to pay to see them in Yuanyang. Though perhaps they are the most impressive there. I wouldn't know. When I went to Yuanyang the place was covered in such a thick, grey haze I couldn't even see the terraces. Took my parents there, too. What a disappointment.

From what I understand, there is a season when they are most picturesque. And there are some belting sunsets over the water.

There is a season to get the usual terrace photos. In early Spring, before the rice is planted is when you can get great reflections. The wonderful colors escaped me until I found out the colors are photoshoped.

Sunsets are great but problematic. The burning of old rice plants produces a haze which is impenetrable to your camera lens. You can make some improvements with contrast and light adjustments later but you will start with a poor image. Hope for a strong wind.

I had more luck with sun rise but less luck with the driver. First morning the driver insisted on breakfast so there were no sunrise shots. Leave the hotel at least one hour before sun rise. Photos at sunrise from Dou Yi Cun were pretty good. You need to get there and set up in the dark. Use a tripod due to low light. As the light constantly changes you need to take the same shot over and over (I have a 64GB card and just click away). Unfortunately, there will at least one guy who will decide you have picked the right spot and will kick your tripod many times.

At Dou Yi Cun, they have set up multiple positions for taking photos. This is quite good as it does get crowded in spite of having plenty of room. I would expect the tourists to increase now. Look for the local tourist map.

@ Geogramatt, there's actually a sticky little provision that the government managed to stick into the original designation for Three Parallel Rivers which says the World Heritage site only includes areas above a specific elevation (don't have the figures on me at the moment), thus actually excluding the dams from the heritage site. UNESCO has been expressing a lot of concern over the overall impact of the dams on the site, but by technicality it would be impacts that are created from outside the actual world heritage area giving UNESCO a little less footing to stand on since no dams are being built within the actual UNESCO designated area.

They've also threatened to revoke Lijiang's status multiple times over the years ever since the Chinese installed the bright neon lights on everything but it's never actually happened; I just don't think the UN has the guts to do that to the Chinese government.

Everything you always wanted to know about UNESCO ... but were afraid to ask!

www.globalresearch.ca/[...]
UNESCO Its Purpose and Its Philosophy Part 1

I agree with Geogramatt, what's the big deal with Yuanyang, you can find terraces almost anywhere.

We stumbled upon this valley during our expedition south of Shaxi.

There are just more of them in Yuanyang and further in Lüchun County. Hundreds of kilometres of endless rice terraces, from 200m in altitude to a whopping 2000m. Also the ones south of Shaxi may not be part of an over 1000-years old Hani agricultural tradition.

Granted, if you just want a nice picture, you can go elsewhere.

mike4...
is site blocked? All I get is oops message.

The Hani rice terraces are about 1,300 years old. In Yuanyang, much is made of the Hani inventing this method of agriculture. But the Ifugao Rice Terraces in the Philippines are supposed to be 2,000 years old. Terraced farming can be found in Peru as well which is supposed to be 3,000 years old. Sadly, I have come to believe China did not invent every thing.