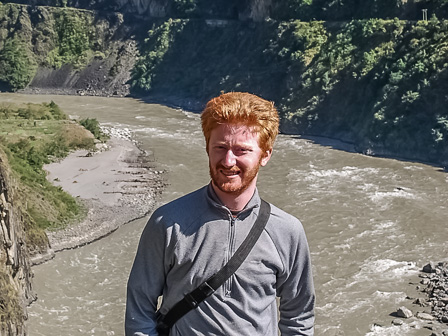 There is a tremendous amount of change happening in northwest Yunnan. In addition to being the province's overland tourist gateway to Tibet, the region's fragile rivers, ecosystems and cultures are all in flux. Dams, increasing tourist dollars and the encroachment of an ever-modernizing society are all inexorably altering life from Dali to Deqin.

One man watching all of this is Brendan Galipeau, who holds a master's degree in Applied Anthropology from Oregon State University in the United States.

After spending five years studying the effects of dams on the Lancang (澜沧江) and Nujiang (怒江) rivers for his MA, Galipeau has turned his attention to studying the economics of natural resources in the river valleys of the upper Lancang River. He is currently conducting PhD research for the University of Hawaii in Environmental Anthropology.

GoKunming sat down with Galipeau to discuss his life in northwest Yunnan, how people in the area are changing their traditions and how a grape varietal once thought to be extinct is indelibly altering one of Yunnan's most awe inspiring places. 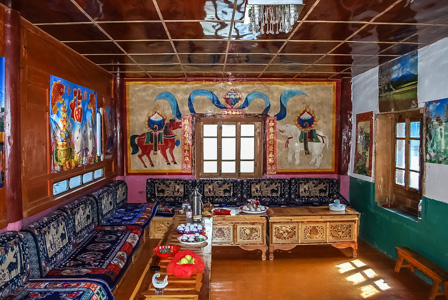 GoKunming: You were studying caterpillar fungus and its role in upper Lancang valley economics. How did you come to focus on grapes?

Brendan Galipeau: I always thought cordyceps were a very important component for people living in northwest Yunnan to supplement their incomes, and they are. But it wasn't until I arrived in Deqin County [德钦县] that I realized just how important grapes are to the local economy. 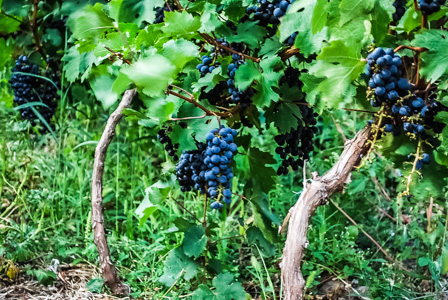 GoKunming: Where did the grapes originally come from?

Galipeau: Jesuit missionaries from France introduced them in the 19th century. They brought seedlings with them. When they arrived at the southernmost Tibetan village on the Lancang in what is now Deqin County they planted the seedlings. Cizhong Village [茨中村] has grown the grapes continuously since then, using cultivation and wine-making techniques taught to them 150 years ago.

The grapes are a Cabernet Sauvignon varietal — a rose honey strain. They used to be grown in France but were wiped out by a blight and thought to be extinct. By a twist of fate they still exist, but only in Yunnan. 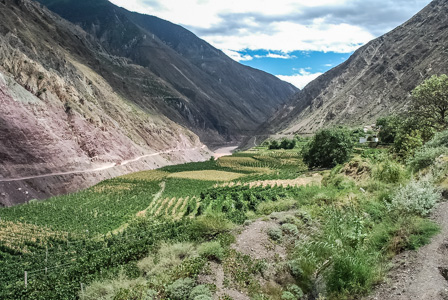 GK: What is happening with grape cultivation in northwest Yunnan?

Galipeau: Well it used to be only the one village of Cizhong. Over the past ten to fifteen years their has been massive government-sponsored expansion all over the region. This has happened along the Jinsha River in Benzilan [奔子栏]. Now its happening in the valleys along the Lancang River.

In the village where I live the local government has actively promoted grape growing. They have given farmers free trellises and seedlings, taught them about cultivation and put them in touch with buyers from the Shangri-La Red Wine Company. 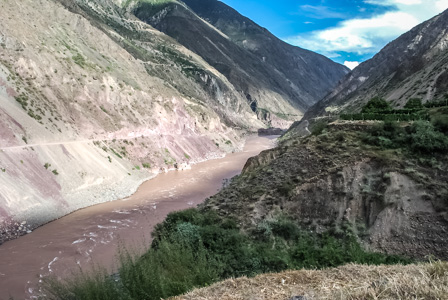 GK: Is growing grapes as a cash crop working for the farmers where you have been conducting your research?

Galipeau: The village has been growing grapes for eight years. The residents are making more money than they ever have, but at the same time they are skeptical grape buyers will show up and buy entire crops. 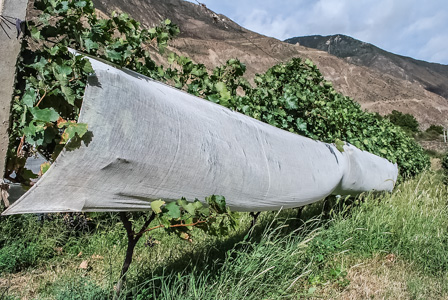 Grape vines wrapped in protective gauze to keep them from rotting

GK: Where causes that mistrust?

Galipeau: I can only speak from my experience, but I've been present when a scheduled purchase was expected to happen. The buyer kept calling, again and again, putting off his arrival.

The problem isn't waiting for the money, it's getting the highest possible price. Grapes are bought by weight. If they aren't harvested at the optimal time, they begin to shrink on the vine and eventually they rot. 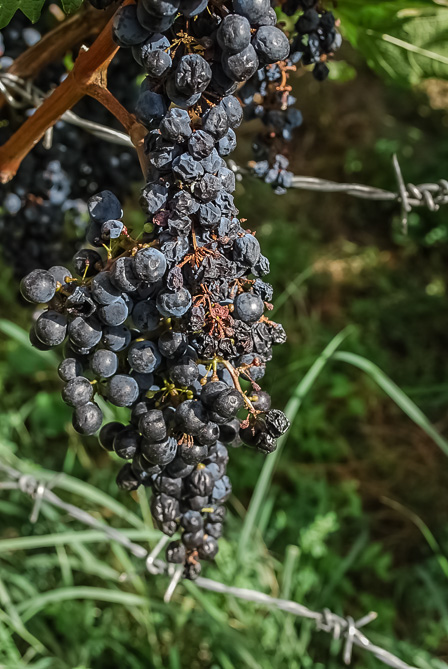 Grapes rotting on the vine

GK: So this is a vital supplementary form of income for farmers of the region, and during harvest season, every bit counts?

Galipeau: Initially, grapes were an economic enhancement for the area's farmers. Now, in the communities I work with, it is becoming the crop of choice.

Tibetans living along the Lancang have traditionally grown wheat and barley for themselves and corn for their livestock. Now their fields are mostly a monocrop of grapes. This has become so pronounced that they are becoming "Hanicized". By that I mean they are buying and importing rice as a staple instead of raising more traditional grains.

People who used to be known for herding dzos — or cows crossed with yaks — are limiting the number of livestock they keep so they can utilize grazing land for vineyards. So traditional crops are becoming less and less important.

Moreover, other products, such as milk and butter are becoming scarce because livestock numbers are falling. The village I was in only had one household that maintained a large heard of dzos. They ran a lucrative business selling meat and dairy products to other families who used to make those things themselves. 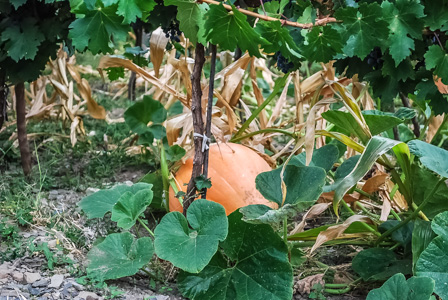 A pumpkin growing between rows of grape vines

GK: Other than people who have yet to make the switch to grapes, are other ways of making a living through agriculture being entirely pushed aside?

Galipeau: This is what my PhD thesis is concerned with — namely, what happens when indigenous societies produce naturally-sourced products for high-end consumers. And then I am looking into how it affects culture and people's sense of self and sense of worth.

So to get back to your original question: people are still farming, but mainly for themselves. They have begun doing what is known as inter-cropping. Vegetables are planted between rows of grapes where in Europe there would just be a footpath. The farmers of the Lancang valleys do this with corn, tubers and all sorts of greens. 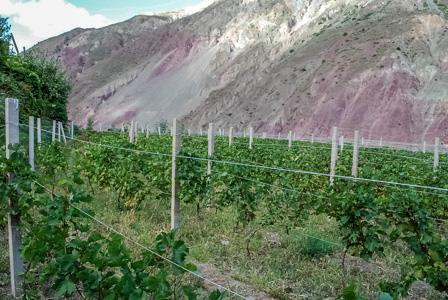 Vineyard beside the Lancang River

GK: If something were to happen to the grape harvest, are there other sources of income?

Galipeau: Other supplementary cash crops are also raised. No one is tearing down old walnut groves to clear land for vineyards. Foraging in the mountains for Matsutake mushrooms is still pretty common and farmers have learned to sell grapes not deemed good enough for wine-making as table grapes.

Farmers also set aside some plots of land to grow small amounts of wheat or, if the family does have livestock, corn to get their animals through the winter. But the old ways in places where grapes are now being grown have pretty much been turned on their head. 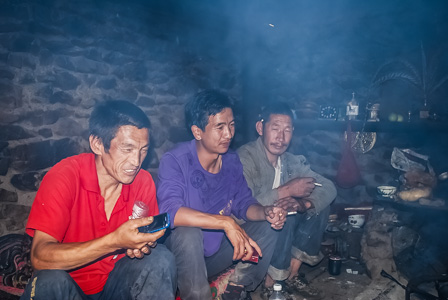 GK: What is the quality of the wine made from these grapes like?

Galipeau: What my argument will be in my thesis is that in the new areas where people are growing grapes, they have no idea how to make wine. In the original village where the grapes were introduced by missionaries people have preserved a wine-making tradition. They can sell their homemade wines to tourists and sell their other grapes to corporate buyers.

In the new places where grapes are grown, which have only recently been able to produce quality grapes, the people don't have the skills to distill their own vintages. New, high-elevation vineyards have opened where once they couldn't have. Other graduate students are researching how much these new vineyards owe their crops up in the mountains to climate change.

But the fact remains, I would argue, that new grape farmers are almost completely dependent on buyers. Some people mix traditional barley wine with hastily made grape wines. What they create is not of a particularly good quality. But, like grape farming in the area, this situation is rapidly changing.

My mistake. Error has been corrected.

Thanks Pat and Brendan...a very interesting and informative article!
Love the photos...I will be following your research in this area of Yunnan.
Nevada

Two quick factual corrections, one of which was my fault. Cizhong is actually still in Deqin county, not Weixi, I misspoke. Second is that Benzilan is actually on the Jinsha not the Nujiang. Thanks to everyone at GoKunming for this great feature!

Article has been changed to correct errors. Thanks to Brendan for his time and insights.

"the people don't have the skills to distill their own vintages"

Wine is not distilled. You can make perfectly good wine without being a distiller or knowing anything about distillation. It's an entirely distinct activity.

My boyfriend and I just spent the National Day holiday hiking in this area, it is stunning. Thanks for the helpful info before we left Brandon!!

I don't believe I ever actually used the terminology distill in this interview, but it was over a year ago so I may have forgotten. Indeed I recognize wine making is quite different from distillation, though in fact in Cizhong many households partake in both practices and in fact distill liquor both in the traditional method with barley but also with the discarded grape skins and seeds left over from wine making. This makes a pretty powerful baijiu indeed!