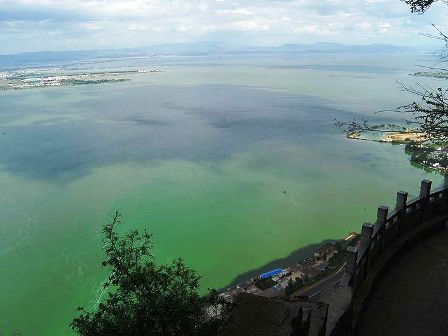 Dianchi Lake seen from the Western Hills of Kunming

Billions of yuan have been spent on attempts to clean up Dianchi Lake, mostly to no avail. Rehabilitation efforts have ranged from modest to bizarre. A new strategy unveiled earlier this week is one that perhaps shockingly has not been tried before: completely eliminating the flow of Kunming's untreated sewage into the lake.

Thirteen treatment plants capable of decontaminating both raw sewage and factory waste water are scheduled to be completed in the next 20 months. Currently, ten facilities are under construction, many at the mouths of the most polluted rivers feeding the lake.

The Yunnan government, as part of its Twelfth Five-Year Plan, has allocated 14.1 billion yuan (US$2.27 billion) for the project in 2013 and expects to spend an additional 20 billion yuan (US$3.22 billion) next year to get the treatment facilities on line.

One such treatment plant will be located where the Niulan River (牛栏江) empties into the lake on its eastern shore. When finished the biological filtration center will by itself clean an estimated 600 million cubic meters of water annually. The processing capacities of similar facilities, including one along Kunming's Panlong River (盘龙江), have yet to be released.

Dianchi Lake is China's eighth largest freshwater body, and perhaps one of its most polluted. It is fed by 35 rivers that carry untreated agricultural and factory runoff water, as well as sewage, into the lake.

For the past six years Dianchi has been covered with a slimy coating of green algae that is often accompanied by a noxious smell. The seemingly permanent algae bloom has been attributed to Kunming and other, smaller cities discharging their untreated sewage into the lake for decades.

Government officials have estimated cleanup costs associated with the lake could exceed 100 billion yuan (US$16 billion) by 2020. In 2009, Kunming mayor Zhang Zulin (张祖林) called lake rehabilitation efforts "One of the most difficult problems [facing] the country."

Wouldn't it be great if this worked. Anybody confident?

Finally! A child would of thought of this a long time ago.

A new strategy unveiled earlier this week is one that perhaps shockingly has not been tried before: completely eliminating the flow of Kunming's untreated sewage into the lake.

An ounce of prevention is better than a pound of cure.

So true! Common sense is not so common I guess.

It seemed the invasive water hyacinth species helped but you cant expect this to clean the lake in 2 years, this would need 10 to 20 years..

I suppose some official wanted to make money and change plans..

This is good news.
I think that in the past they were looking to remediate without major infrastructure development, and the ongoing costs of running any treatment facilities.
In fairness, it would have been really good to have achieved this biologically, but I think that we have to accept that if the problem is created on an industrial scale, then perhaps the solution must be as well.

In addition to the problems of urbanisation (concentrated population = high volume/density sewage) and industrial outflows, I once read that part of the problem was the 'mining' of the phosphate rich soil (for phosphate extraction industry) was causing loose (phosphate rich) sediment to be washed into the lake.

I have noticed in the past week, after a prolonged warm spell, the water along Haigeng Daba has turned green again. This has happened almost overnight, as it does. This will be happening across the lake. Hopefully with treatment plants along the lake coming on line, the water will be better next year.

I am from Seattle and Lake Union(downtown) used to get all the untreated sewage from the city...during the 70s people started to realize that the lake was nasty...they stopped the flow of poo and stuff soon after, But it wasn't till the 90s that it was ok to swim again. This lake is WAY bigger than Lake Union! if it took 20-30 years for the LU to get better, than it will take longer than 1-5 years for Dianchi (unfortunately)

I am glad they are doing it for sure!! But don't get to excited.

The local/central government response to cleaning up Dianchi has to be laughed at.

Step 1 - Dianchi's getting dirty. We know its because all of the human/industrial/farm waste we can see going into it. Don't care because caring doesn't make us any $$$.
Step 2 - Realise its actually a problem.
Step 3 - Wait until it becomes a HUMONGO MOFO problem.
Step 4 - Commit to cleaning it up by throwing a hell of a lot of money at it. Look for some quick way to clean it up involving ill thought out and unresearched but looks like we are really doing something method.
Step 5 - Commit more money to cleaning it up because Step 4 ain't working and has likely made the problem worse. Use some more but just as dodgy methods as in Step 4 but with bigger machines and more construction so it looks like something BIGGER is happening.
Step 6 - Finally admit that pollutants going into the lake are causing pollution (duh) and the only way to stop polluting the lake is to stop putting pollution into the lake (double duh).
Step 7 - Stop pollution getting to the lake.

Oh yeah, and is that figure right?

That works out to be around 1100 cubic metres of water every minute (or 19 cubic metres every second)! And that's if its going 365 days a year 24 hours a day... I would be highly surprised if this was accurate, but it could be, not sure how they clean the water...

@blobbles: Well, the translation is correct. The report says 每年6亿方的牛栏江水. But when I did the math comparing stats from small treatment facilities outside of China it doesn't seem to add up. Unless these Dianchi plants are truly huge. Here's what I compared the 600 million figure to:
www.waterworld.com/[...]

Dianchi has a surface area of 298 km2 and a mean depth of (a measly) 4.4m which gives a volume of 1.3 billion m3 (my maths right?). Which means with a couple of plants they could filter the whole of Dianchi in a year! Something tells me that's not quite right...

Besides, this will process the water flowing from a river right? I suppose 19m3 a second is about right for a river flow though, but a pretty big river, like the size of this one:

I haven't seen one that big around Dianchi though... I think someone's screwed the numbers somewhere.

Remember that these plants may not operate 24/7/365 as well which makes it look even more unlikely.

I know this sounds rather ridiculous but has any of these groups thought about a recirculating/harvesting system for the lake. I know with the tech that we have for water treatment it is possible, just really expensive. Stopping the pollution to this lake would be awesome, but you would need to have the same type of systems I just mentioned for numerous locations making even more expensive.

@cpwater
I am ignorant of this technology. More info please.

Actually, that link I provided stated that the biggest plant processes 1 billion litres a DAY not a YEAR as I stated. Which means they can process 1.38 billion m3 of water a year! That's an astronomical amount... especially considering its only for 5 million consumers... most likely its industry as well.

So the one they are proposing is still entirely possible, it would be under half the size of the worlds biggest.