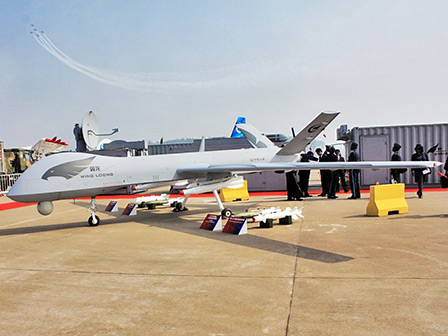 Liu was head of the task force organized to capture Mekong drug kingpin Naw Kham. Naw was wanted for the October 2011 murders of 13 Chinese sailors on the Mekong River in Thailand.

Police from China, Myanmar, Laos and Thailand cooperated on the Naw investigation but were hampered by the overlapping laws of each country. In the Global Times interview Liu says he and his counterparts had to respect each of the four countries' laws and customs, which led to at least four separate instances of Naw evading capture.

It was after one of these escapes that Liu began to consider the use of a drone. His task force was fairly certain of Naw's whereabouts in Myanmar but were not confident they could reach him. "One plan was to use an unmanned aircraft to carry 20 kilograms of TNT to bomb the area, but the plan was rejected, because the order was to catch him alive," Liu said in his interview.

Unmanned vehicles were first publicly displayed by the Chinese government at a Guangdong air show in November 2012 — seven months after Liu's Myanmar strike proposal. His comments appear to indicate China now has confidence in its nascent aerial drone and remote guidance programs.

Control of drones is accomplished via sophisticated satellite guidance systems and China has been developing a program of this type, named Beidou (北斗), for the past several years. The navigation system is already in use by the military and is expected to be implemented for limited civilian purposes by 2015.

In his interview, Liu did not address the international complications a cross-border drone strike in Myanmar might have created. That point, for now, is moot as Naw Kham was apprehended in Laos in April 2012 and then extradited to China.

Five months later, Naw and several of his associates were tried in Kunming on charges of murder, drug trafficking, kidnapping and the hijacking of ships. Naw was found guilty on all counts and sentenced to death. Execution of that sentence is currently suspended pending a series of appeals.

That statement about "drop TNT" may have been taken out of context (or lost something in the translation. The picture of the drone clearly shows missiles are attached.

Drones should be reserved for terrorists, probably not drug dealers. Maybe this was an exceptional case. It didn't sound like this guy was an immediate threat to China, though.

the problem is, when one faction takes it upon themselves to drone strike against terrorists in spite of any national borders, agreements and/or affected civilians, another faction will naturally claim it as their god-given right to drone strike against drug lords/rebels/dissidents/civilians/whatever takes their fancy. This is something we will se more of in the future, as Russia and China gets the technology and confidence to emulate US behavior and violate their neighbors in a multitude of new and interesting ways; China is just getting started, there's much, much more to come.

well, the guy might reasonably have been a threat to individuals in China, which makes him no different from the way terrorist are a threat to the US; no terrorist organisation are in any way an even a remotely serious threat to the US as a nation, the only thing they threaten are the lives on individual americans, and that would arguably make this drug lord comparatively dangerous, as he has apparently ordered various large killings and stuff. There is no particularly strong dividing line between terrorists, rebels and large-scale criminal leaders, and one is not necessarily more dangerous to civilians than the other, with terror-like methods being employed even in situations like the drug war raging in Mexico. What I mean by this is that notions like 'drone strikes should be reserved against terrorists' are rather problematic, as there's not always that much separating Al-Qaida from drug cartels, not to mention various insurgencies, whether their cause is perceived as legitimate or not.

This whole drone thing is really a slippery slope.

"This whole drone thing is really a slippery slope"

It's this whole "we can violate other countries' sovereignty and kill our own citizens and those of other countries—all with a total lack of transparency—that's the problem, especially when, as Natsymir mentioned, we arrive at the point where other countries begin to feel they have the geopolitical clout to start emulating the US.

The US has been at this for many decades. Think the CIA arming militants in Afghanistan and Iraq with weapons that years down the line would be used against the US military. Drones are just the latest innovation in this behaviour.

It is. Why? Don't for one minute think it's just going to be use to target 'the enemy'. If you ever watched 24. The last season of it where the guy uses the drone and zooms in on the girl on the beach and she removes her top. Anyway, invasion of privacy is another big issue. Not to mention the danger of one of these drones hitting a plane or malfunctioning and hitting a populated area.

High resolution photography from satellites and manned spy planes had been around for a quite a while before the advent of drones. And I don't doubt for a minute that it's been used at various points to spy on American citizens on American soil (though I'm not aware of reports of this off the top of my head). I suppose, however, that drones do make it cheaper and easier to engage in domestic spying.

It still seems like the larger point is not that drones are inherently bad, but that we face a threat from governments' lack of respect for transparency, international law and citizens' rights.

I read that the US government/military has created mosquito spy drones. They resemble mosquitos and have cameras and mics.