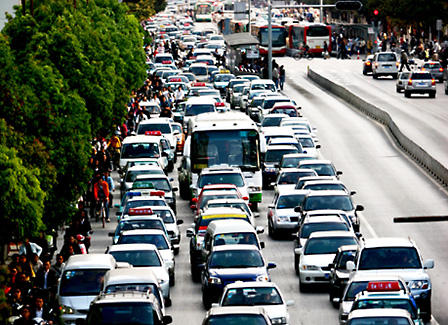 Last week China celebrated both Mid-Autumn Festival and National Day. The eight-day holiday saw record travel numbers around the country and Yunnan was no exception. Travel in the province was at an all-time high.

Millions took advantage of time off work to visit family or go on vacation — often by car. Yunnan's rapidly growing infatuation with personal vehicle ownership combined with the temporary suspension of all highway tolls led more drivers than ever to take to the road. Yunnan Information News is reporting that while all means of transportation experienced year-on-year growth, travel by car in Yunnan doubled.

During the holiday an estimated 3.8 million privately owned cars plied Yunnan's four largest highways — the 108, 213, 320 and 324. Estimates for traffic volumes on the dozens of smaller public roads in the province have yet to be released.

Yunnan's major traffic arteries were policed by 2,750 patrol cars and authorities handed out more than 10,000 fines. In efforts to prevent gridlock 7,300 road management workers were on duty throughout the province to handle problems.

Kunming Changshui International Airport was flooded with travelers as well. Over the holiday Kunming's new airport accommodated 469,000 customers on 3,950 flights. Airport officials told Yunnan Information News that 89 percent of flights were on time.

Yesterday was the final day of Golden Week and also the busiest. Changshui Airport set a record with 603 flights landing or taking off in a 24-hour period — roughly one flight arriving or departing every two-and-a-half minutes. Trains carried 275,000 passengers along Yunnan's rails while 1.47 million people rode long-distance buses, according to a Yunnan Net report.

Despite the millions of people journeying by cars and buses around the province, the Yunnan Highway Management Bureau reported only three major accidents and four fatalities. Drivers in Yunnan were seemingly safer than those in the rest of the country as there were 794 driving-related deaths nationwide over Golden Week.

Well, our car was 3 inches away from being in a fatal crash as a truck slid backwards across the road at speed and just missed us and the car behind.

Thanks for providing another sanitized view of Yunnan that bears little resemblance to what people say about their 'holidays'. It is also good to 'know' that Yunnan has one of the best road safety records in the world, with (if one would extrapolate) just 150 people dying in traffic accidents over a year in a population of over 40 million.

Most articles by you seem to be just sloppy copy and paste jobs from the internet - essentially collations of unchecked numbers. Sometimes I wonder if you actually live here.

I spoke to a scottish engineer who works on roads here and overseas and he tells me that the authorities have a trick whereby they only record the deaths of people who die at the scene.

If they included the deaths of those who live long enough to make it back to hospital you have a much bigger number than 794.

I don't need to be 3 inches from death to continue to refuse my wife's entreaties to buy a car.

I also doubt that low count, with the number of accidents I see on the highway I take to work daily I think if they had four death a day in Yunnan it would be a very good day for their statistics.

The low number of driving related deaths over the week doesn't surprise me. With traffic so congested and moving so slowly (or not at all), it's easy to have a "fender bender" but more difficult to have a fatality.

Traffic in China would move so much more quickly if people would stay in a lane and drive in a straight line instead of going up the road like a snake!