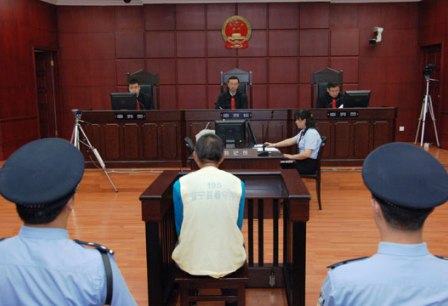 A bizarre case in Jinning originally thought to involve kidnapping, but found to be a series of murders, has come to a close. The Intermediate People's Court of Kunming yesterday found Zhang Yongming (张永明) guilty of murder and sentenced him to death, China Daily is reporting.

Zhang was accused of strangling 11 people and dismembering, burning, or burying their remains in a series of grisly serial murders. Lawyers for Zhang claimed he was mentally ill but the court found him fit to stand trial. When handing down its ruling, the court called his actions "particularly cruel and flagrant."

The case began in 2008 when several people disappeared from the village of Jincheng (晋城) in Jinning county. Disappearances continued to happen over the next four years. Townspeople initially believed villagers were being kidnapped and forced to work after a missing man resurfaced and told police he had escaped from an illegal brick factory.

Local police were accused of foot-dragging in their investigations and a special investigative team was established to work the case in May 2012.

Zhang was arrested May 25 when police found a collection of eyeballs and drying human flesh in his house as well as bones from several victims buried in a nearby garden. The story gained international attention when unsubstantiated reports claimed Zhang was a cannibal who turned his victims into sausages and sold them at a local market as ostrich meat.

During Zhang's trial it was revealed he was convicted in 1979 for first-degree murder and sentenced to death. His sentence was later commuted and he was released from prison in 1997. Upon his release, Zhang was given a small home in Jincheng and issued a government stipend, according to the China Daily report.

Nice job allowing an insane murderer back into society so he could kill countless more people, eat their flesh and stack their eyeballs. That's what you get when you're focused on punishment and not rehabilitation, have nothing in place to do something about the mentally ill or some functioning psychiatric system able to determine if someone is fit to be released. Also, 4 YEARS to figure out who did this in a relatively small town where an insane loner with stacked human flesh on his property lives?? No one managed to tip off the police that, you know, just maybe they should go take a look at this guy's property?

You've lived in China long enough to realize that there is virtually no sense of communal responsibility. It's every man for himself. Think about the traffic, getting on a bus or trying to buy a train ticket. Because traiditionally one could not rely on anyone outside of immediate family, everyone else is suspect. Hence, no one is willing to get involved.

Isolated case. This happens all the time in the USA - especially with child molesters. We arrest them (because child molesters are KNOWN serial molesters), usually after they've molested several to hundreds of children, put them in jail for a few years, let them out, they molest, get caught (if society is lucky), put them back in jail....cycle goes on until they die - for which we the taxpayers get to pay. Civilization should be balanced against barbaric death penalties.

Our serial thugs get similar treatment.

wow... It just amazes me that the this went on for 4 years without the local police once thinking to themselves to maybe check the former convicted killers home. Then in May it took an outside police force a matter of about 3 weeks to get to the bottom of it. I wonder how long the local police of the area would have let this go on before actually thinking about looking into the local killers house. In regards to the "molester" comment, yes you are absolutely right but I guarantee you as soon as it was found that a child was molested or missing where the convicted molester was living, that persons home would be checked on right away.

@ahmet
You are mostly correct, although there are isolated incidents of citizenship. This is a culture which must and will eventually change in China - but perhaps not in our lifetime. As per HuJinTao/WenJiabao, China must move towards a "sustainable harmonious society". It will happen - in some shape or form. First it has to come from the leaders, which both Hu and Wen have demonstrated. Then it has to begin trickling down.

@laotou, thanks for your comment. I think that there are two completely different worlds at work here. The official CPC line about harmony is a thinly veiled ideal of group think and uniformity rather than the kind of community spirit and cooperation we normally think of. The other world is the continuous improvement in the well being of a large number, albeit a minority, of Chinese people who have formed a large middle class open to a world of ideas and information beyond Chinese borders. As their children are exposed to the benefits of communal responsibility, as they experience more and more acts of selfless kindness by those around them, social responsibility and true harmony may yet come I the next generation. Let's hope so....now what to do about the other 900 million Chinese!

If you kill a few people, you're a serial killer. Kill a million, and you're a politician.

No one lives alone, certainly not in a village.

If justice had have been done in 1979, this would not have happened!

No, just keep him locked up.