By Chris Horton in Features on December 6, 2011 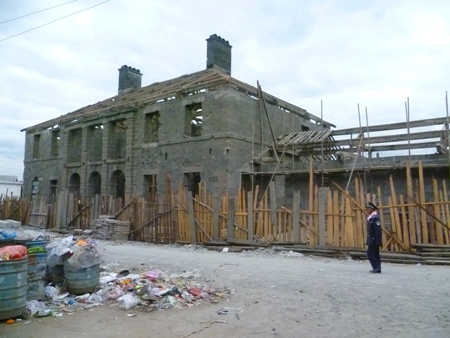 The former British consulate building in Tengchong, circa last week

Last week when exploring the city of Tengchong (腾冲) in western Yunnan, we found ourselves strolling past the city's grain and oil market when a building beyond the gate caught our eye.

After asking around, we discovered that the comparatively large building, with thick sturdy walls made of volcanic rock and a denser stone used in doorways and windowsills, was the old British consulate in Tengyueh (腾越), as Tengchong was then known.

Ninety years ago, the thriving cross-border trade between British-controlled Burma - as Myanmar was known then - and Republican China was centered around Tengyueh. In 1921, construction work began on the British consulate in Tengyueh, with completion arriving 10 years later in 1931.

Trade was the primary stated reason for the British consular mission in Tengyueh, but there were other factors at play as well.

In the early 20th Century, the British Empire included Burma to Yunnan's west, while colonial rival France was well established in Indochina, to Yunnan's south. A French-built railway from Haiphong to Kunming was completed in 1910 and had essentially brought southeast Yunnan into the French sphere of influence.

The British were eager to keep an eye on France's actions in Yunnan, and on developments in Yunnan in general. Booming Burma-China trade offered the perfect justification for a consulate in Tengyueh.

A showdown between the British and French in Yunnan never took place. Instead, Japan entered the mix, invading Tengyueh in May 1942 from Burma, which it occupied after temporarily expelling the British from the country.

The British consular mission had evacuated Tengyueh well ahead of the Japanese invasion. It was never to return. 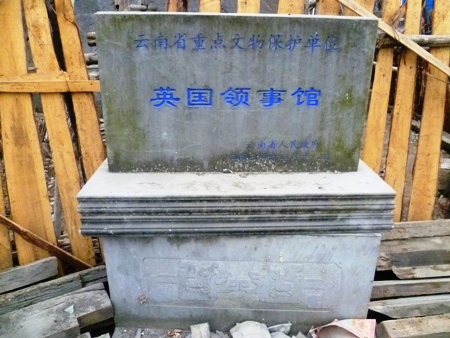 This sign, which reads "British Consulate", is the only marker that indicates the building's past identity

In 1944 the Chinese army, with some American support, fought the Japanese to take back control of Tengyueh. Given its size and solid stone walls, the former British consulate made an ideal location for Japanese troops to resist the Chinese-American offensive. But it would not prove enough - China retook the city.

Since then, the British consulate has fallen into a state of increasing disrepair. In 2003 it was named a protected building by the Yunnan provincial government, but little has been done to protect or maintain it until recent weeks.

In November of this year, restoration work began on the building, which will keep its original stone walls, ceramic roof tiles and some wooden framework. Completion of the restoration is expected to be completed by April 2012, according to workers on the site.

Below is a look at this historic building as it is, and once was: 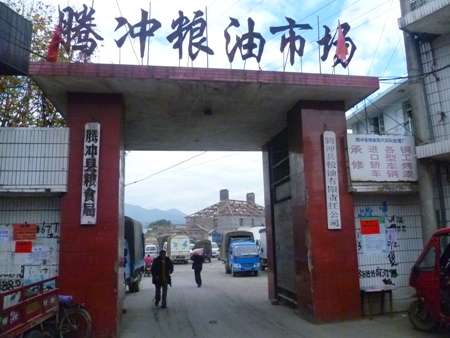 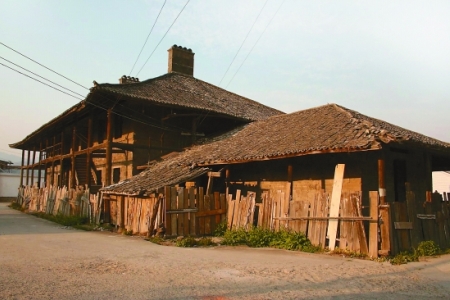 This photo from Spring City Evening News shows how the consulate looked in late 2010. Scottish botanist Peter Hutchison, who visited the building in 1997, described it as "a strange structure with a Chinese roof topping a very classical building of solid masonry that would not have been out of place in Georgian Edinburgh". 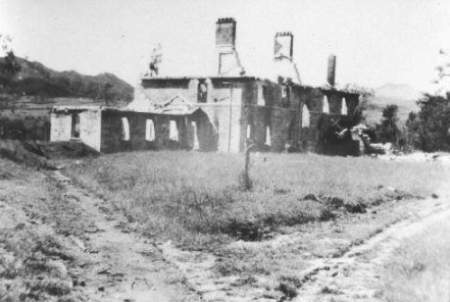 This photo, from a blog post about Swedish missionaries who had been working around Tengyueh in the 1940s, shows the consulate building after the first round of fighting by Japanese and Chinese troops in the city in 1942, which resulted in its capture by the Japanese. 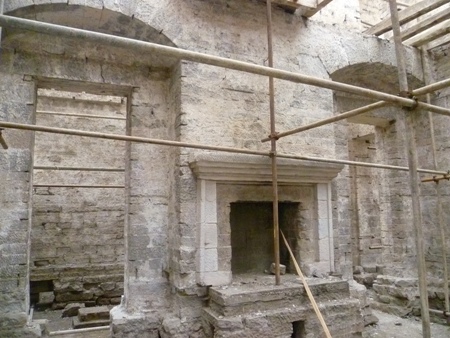 This is one of the consulate's two fireplaces. It is not hard to imagine British consular officials and their guests having drinks around a fire, discussing France's designs on Yunnan, or perhaps devising plans to head to Kunming to avoid the Japanese army, which must have seemed unstoppable at the time. 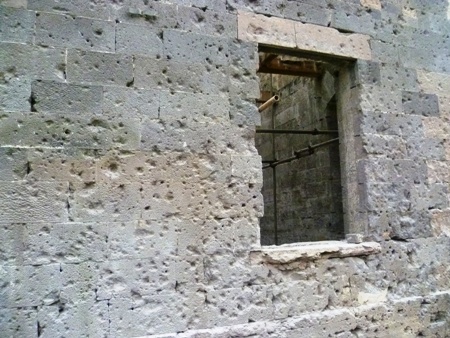 We asked a stoneworker who was working on the restoration of the consulate about the pockmarked walls of the consulate's façade. He told us that the holes were bullet holes made by Japanese firing upon the building. Upon further research, it seems more likely that the holes were actually made by Chinese bullets being fired at Japanese soldiers who had taken refuge within the building. 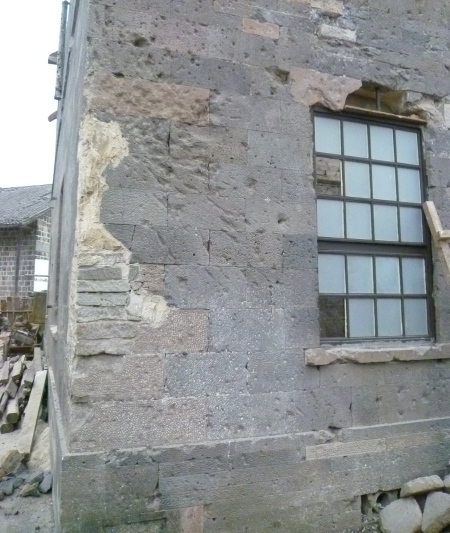 Given the size of the patch on this corner of the consulate building, as well as several other holes that were considerably larger than the other bullet holes, it would appear that the Chinese troops had heavier weaponry as well.

All too aware that Yunnan was the only buffer between Japanese forces in Burma and the Nationalist/Guomindang provisional government in Chungking (Chongqing), Generalissimo Chiang Kai-Shek sent as much manpower and firepower as he could muster to take the battle to the Japanese in Tengyueh. 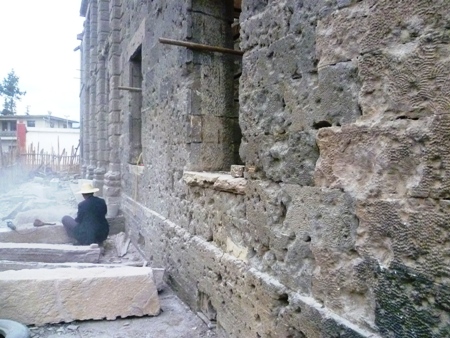 A small team of laborers is being used to restore this protected building built by the British government 80 years ago. Ironically, most of the oldest Chinese buildings elsewhere in downtown Tengchong are being demolished to make way for real estate developments.

how did you knwo the holes were actually made by Chinese bullets being fired at Japanese soldiers who had taken refuge within the building?where did this result come from?

How about getting on the interwebs and attempting some research of your own?

Must have walked past that gate a handful of times not noticing anything inside. I'll go there tomorrow to take a look I think. @Jarhead: I'm not sure where Chris has his info from but according to the locals here Tengchong fell without much fighting inside the city limits so it's at least a reasonable assumption to think that the Japanese made their last stand in one of the few solid stone structures of the period at the time of Tengchong's liberation, hence were subjected to a lot of rifle fire with possibly a few rounds of small size shells thrown in.

I'm operating under the assumption that the "war" in the penultimate line is supposed to be "wall".

There is also a French consulate in Xunjin Xincun(Xunjin Village) near Houxin Street in the heart of Kunming. The structure is quite intact, all it needs is a new coat of paint.

care to put a link here?I did search on the web,could not find any...

I hope the reconstruction / renovation doesn't include patching up the holes of countless rounds .

As Danmairen said: "it's at least a reasonable assumption to think that the Japanese made their last stand in one of the few solid stone structures of the period at the time of Tengchong's liberation"

Beatrix Metford, the wife of a British officer, wrote in her 1935 book "Where China Meets Burma":

"About ten years ago the British Government purchased a six-acre plot and started to build a consulate. It was a lovely site, just outside the west gate, with extensive views of the hills and mountains. The house was to be a stone building, comfortable but plain. It was bigger and more costly proposition than was realized. There were no workmen, no masons or carpenters, who had even seen a European house, so they all had to be trained, and when they were trained they struck for higher wages, and so it went on. [...] All tools, all fittings had to be carried by mule or coolie from Bhamo. At last, after eight years' work and vast expenditure, far beyond the original estimate, the consulate was finished and occupied.

It is a very plain house, painfully plain, with it smooth stone walls, its tin roof, its brown woodwork. But inside it is a bit of England. It is most beautifully fitted up and well furnished — a veritable oasis in the desert of mud and wood houses of the borderland. And in its spacious gardens, surrounded by a high stone wall, one can hardly realize one is in China..."

When I first found the building a few years back, the road it was on was called Huanxilu, the western ring road, which illustrates that for a long time its location was on the western outskirts of Tengchong. Today, Tengchong has sprawled beyond it. At that time it was still possible to climb up onto the second floor, where like in any proper English house there were also fireplaces, but everything else had been stripped out.

Two years ago we spoke to a Chinese guy there who seemed to have a certain interest in the building and he told us that the building had been the headquarters of the Japanese, which would not be totally surprising if it was the best-built and best-furnished place in town.

If one travels down to Lianghe, the next county town towards the Burmese border, there is the restored tusi yamen, where some iron-cast window parts still say 'Glasgow' on it if I remember correctly.

best wishes to you !

I went to visit former site of English consulate in Tengchong county last month on 12th, but get to know more of the building's background story by reading this article.

Just a curiosity. Lot of the stuff that used to be inside there at the former consulate, are in the courtyard of a local banker (who bought it all) - the same man, who built the ww2 museum in Heshun.

I have been lucky enough to scan through this material, theres consular Litton's old meat grinder, silverware, George Forrests camera and what not else.

There are a few old stories left about this building, and some can be found on Internet. For example, in Aleister Crowleys China diary is the story when consular Litton dies there, possibly aconite or malaria. Tengchong was called "teng yueh" back then, and its a good searchword for online search. To combine it with "Litton" or "Forrest" may be even more interesting.

How is the quality of the building's restoration.

Hi Mike, sorry, no idea about that. Maybe jessica0081 can share a word or two about this?

The building is much better now, and they kept those bullet holes.

Can someone provide some descent directions or cross street where this bldg can be found.

It's not hard to find, just ask around. Show pictures above if necessary. We found it by accident years ago (circa 2005). If they have a printed map of town (should do because flip-side will be out of town attractions which in Tengchong are many) then that should have it marked too.

The old British consulate is located at N: 24-02-03 E: 98-29-32 at the former rice and oil market at the old West Gate (Xi Men which is no longer there). It is next to the stadium in the middle of town. The area around is under redevelopment and should become a town park. The building is totally restored but they left the war damage in the outside walls intact.