Getting Away: Guandu Old Town 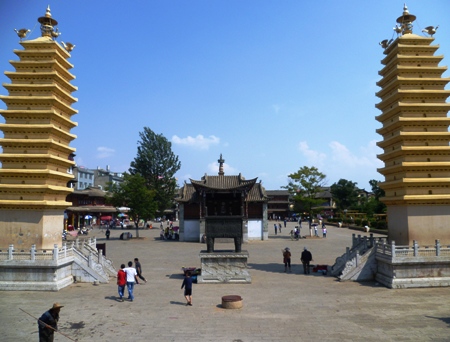 Despite lacking the beautiful scenery and ethnic diversity found in and around the old towns of Dali, Lijiang, Shaxi, Shangri-La and Heshun, Guandu Old Town (官渡古镇) is a pleasant place to spend a lazy afternoon, day or even weekend, without the hassle of leaving the city. Located about eight kilometers south of downtown Kunming, it is only a short drive or bike ride away.

Guandu Old Town is an old town in the Yunnan sense of the word. That is, it does have some old architecture, but the encroachment of real estate developers and their beloved "new old" architectural style is impossible to escape. Guandu's appeal is not its oldness, but how different it is from the rest of Kunming, as well as Yunnan's other tourist towns. 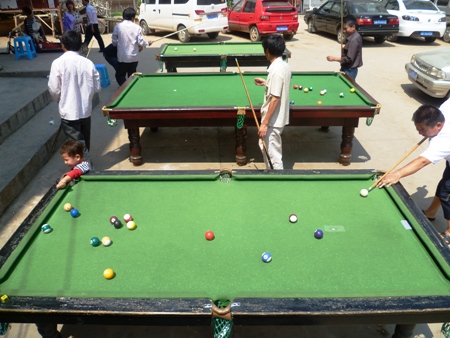 Pool sharks whiling away an afternoon

There is little doubt that the Guandu district government is hoping its old town will be able to raise its tourist revenue over the coming years. In April of this year, Guandu Old Town was named a Class AAAA Tourism Scenic Area (AAAA级旅游景区), a move that has already led to increased tourist visits and will likely translate to its inclusion in package tours in the very near future.

Unlike other old towns around Yunnan, mass tourism has yet to arrive in Guandu. There are few bullhorns and baseball caps and none of the pushiness that often comes with a developed tourist economy. 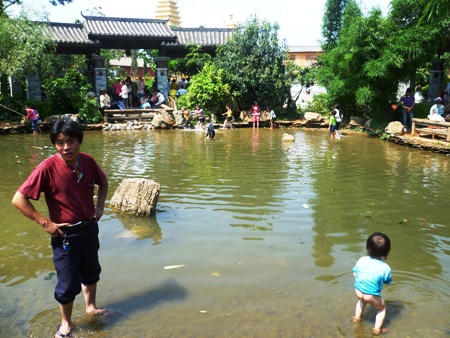 Much money has been spent on sprucing up the old town, much of which has been converted into park space and pedestrian streets. One of the nicer things about this recent facelift is that it has created numerous areas for local residents to hang out and chat, play majiang, sing and dance or simply peoplewatch. It appears that they're observing the camera-toting visitors just as much as they themselves are being observed. 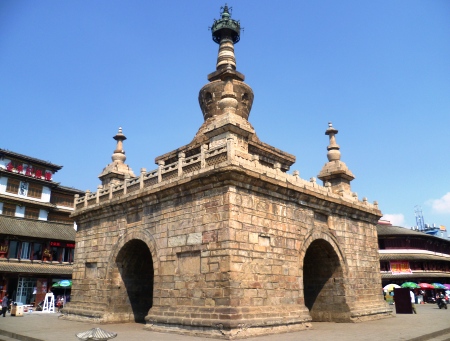 The center of Guandu Old Town is the Vajra Pagoda (金刚塔), which is reputed to have been built more than five centuries ago in 1457. Over the years, the pagoda sank into the soft ground, until it was raised 2.6 meters in 2001. Today the perpendicular tunnels within the pagoda are popular places to escape the midday sun.

On the west side of the plaza that surrounds the Vajra Pagoda are two Bai-style pagodas. Just beyond these pagodas is Miaozhan Temple (妙湛寺), a pleasant Buddhist compound that, like the handful of other temples in Guandu, is open to the public. 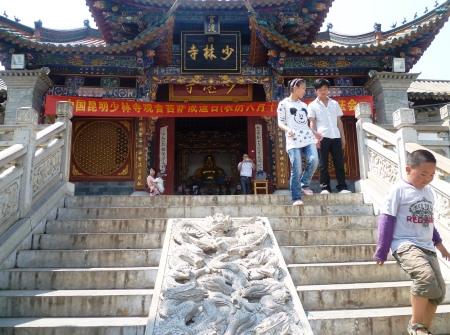 Since 2009, Miaozhan Temple has been known as Guandu Shaolin Temple (官渡少林寺), taking its name from the legendary Shaolin Temple in central China's Henan province, where kung fu is believed to have originated. In 2009 Shaolin temple took over management of Miaozhan Temple – and three nearby temples – for a period of 20 years.

This temple management takeover attracted its share of criticism for commercializing Buddhism, but on a recent visit we found that Guandu Shaolin Temple felt more cared-for than when it was Miaozhan Temple. 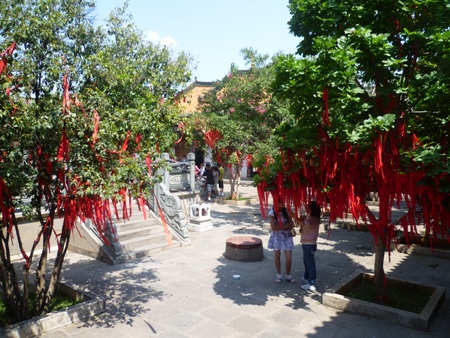 A courtyard inside Guandu Shaolin Temple

We sat down for a cup of tea and a chat with Yan Bei (延贝), the head monk from the Shaolin delegation, who told us that we could study kung fu for US$500 per week or US$10,000 per year, not including room and board. Not cheap, but probably worth it for martial arts enthusiasts who would rather learn Shaolin kung fu in sunny Yunnan than crowded and polluted Henan. Hopefully these aren't from Dianchi

Outside the temple's south wall is a lively little market selling daily necessities to locals, trinkets to tourists and spicy stir-fried snails to anyone brave enough to eat them.

Next door to Guandu Shaolin Temple is another old temple, Fading Temple (法定寺), which is a bit smaller but has fewer visitors, making it quite peaceful. Strolling from tiny courtyard to tiny courtyard, we could only hear the sound of birds, chatting and an old man strumming a four-stringed sixian nearby. The city was slowly retreating from our consciousness. 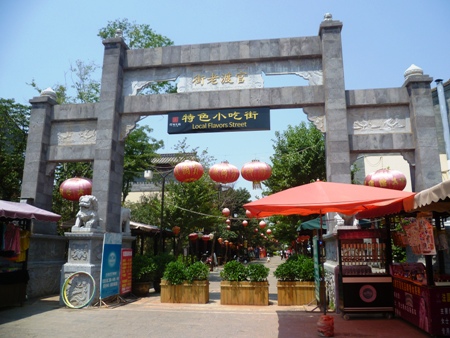 The majority of interesting things to do and see in Guandu Old Town is located south of Vajra Pagoda. A designated food street on the old town's east side offers a wide selection of local eats including mixian (米线), ersi (饵丝), shao erkuai (烧饵块), yellow pot chicken, stinky tofu and barbecued chicken feet, as well as food from further afield such as western Yunnan and Burmese food at Ah Bo's Burmese Cuisine or Kaili-style sour soup chicken (suantang ji, 酸汤鸡). There are also several small stalls with blenders ready to make fresh fruit shakes for five yuan (they generally add syrup unless asked not to). 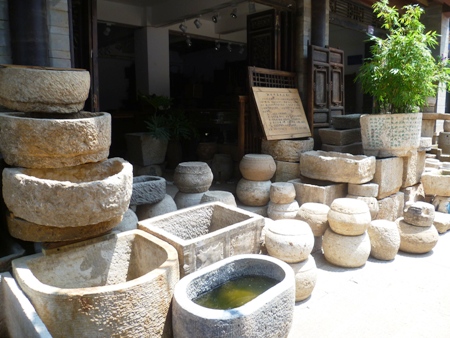 Guandu does not have a shortage of shopping choices, from touristy yak skulls and jade to impractically heavy stone basins and stools. There are also a few smaller, less-maintained temples and several small, winding alleys worthy of exploration. The old town is also home to one of the few places keeping the dying tradition of Kunming Opera (滇剧) alive. Gudu Liyuan Theater (古渡梨园) where the high-pitched singing in local dialect – Guandu's Kunming dialect is considered the most "authentic" in the city – is accompanied by a small orchestra just offstage. The entrance of this small theater proudly displays photos of esteemed visitors including Mao Zedong and Zhou Enlai. It hosts two-hour traditional Kunming Opera performances every day and attracts large audiences generally made up of senior citizens. The 10 yuan entry fee includes a bottomless cup of green tea, which is nice for sipping on as you wonder how the man on stage playing a female role is hitting those high notes.

Lodging
Guandu Old Town currently has two hotels, Tangyun Hotel and Friends House Hotel, both of which are new and offer standard rooms between 400 and 500 yuan. Off-season discounts of up to 50 percent off are currently available.

If you are thinking about staying the night in Guandu Old Town and want a slightly different Kunming hotel experience, Friends House's tatami suites might be worth a look.

Cycling to Guandu Old Town is easy: simply get on Qingnian Lu, ride south until Guangfu Lu and head east until reaching the intersection with 043 County Road/Baoguan Lu, following the brown bilingual signs.

I have been to Guandu Old Town for 3 times, loving it.
you forgot to mention the Guandu Baba (官渡粑粑);-) a good reason to go back again.

Interesting place. Tagged along with some folks and got a few good photos. It seemed to be a trek to get there, 4 buses, and about an hour in time. But then, we didn't take any of the buses Chris mentioned.

The place is quite large. Lots to see and explore. Eating would be no problem unless you are paranoid about eating in China. On the food street there seemed to be a lot of English words in the signs.

We were there last Sunday and it was pretty hot but water and other drinks were easy to buy. It was pretty crowded with few foreign faces.

It is a bit far by bus but worth the time to experience something a little different.

I will go back on a cooler day.

Very close to my home from there,I like the mixian in there,and the Guandu baba alos very good,so it is worth to try!

Also close to where I live. I go to Ah Bohs, it's one of the best restaurants in Kunming :)

Please someone could explain me how to get there, as I am new in Kun Ming, and my Chinese not yet very good.
It seems according to Geezer that there are other buses to go to Guan Du?
I'm living center of Kun Ming, and I did not see the buses indicated in your previous post.
Thank you.

Henri: from the square before the Kunming train station (昆明站), walk east along the road that goes in that direction, past a small bus station on a corner on your left. Soon afterwards, again on your left, will be a small bus stop for a K something bus (maybe K5?), hidden beneath a few trees. One of the stops on the sign will read 官渡古镇. Get on this bus; it's an express bus that's rather comfortable and stops just right outside Guandu Old Town. It'll take forever to get there, but eventually the bus'll pass some archaic-looking gatetowers on the west side of an extremely long and straight road; this is where the Guandu Old Town starts, so get off here. (The speakers will hopefully say 'Guandu guzhen', otherwise, ask the driver).