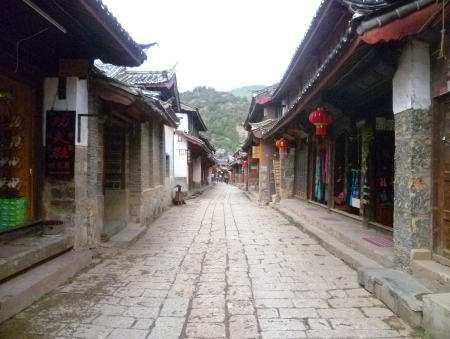 Only 15 years ago, Lijiang's old town of Dayan (大研) was a sleepy warren of old Naxi homes with relatively few tourists. Daily life was still steeped in the traditions of the proud and unique Naxi people, many of whom were alive when the legendary botanist and ethnographer Joseph Rock introduced Lijiang and the Naxi to a curious outside world.

Today Dayan is the most popular travel destination in western China, receiving nearly six million visitors annually. Virtually all of its old tile-roof homes have been converted into guesthouses, restaurants, cafés, bars, or souvenir shops. Every day throngs of tourists walk around with the air of people strolling through a shopping mall.

In recent years, the small town of Shuhe (束河), five kilometers north of Dayan, has become a popular alternative for travelers who want a little less Lijiang with their Lijiang. Despite also being part of the same UNESCO World Heritage Site as Dayan, it is a smaller, quieter town that has retained less of its old architecture but has much better access to nature, including Jubao Mountain (聚宝山), which is perched on the town's western side, and the majestic Jade Dragon Snow Mountain (玉龙雪山), just a few kilometers to the north.

We visited Shuhe recently to attend the opening ceremony of the new upscale Pullman Lijiang Resort & Spa, located just outside town, where we were provided a complimentary room for three nights that was a luxurious and pleasant departure from the average Lijiang hotel or guesthouse experience. 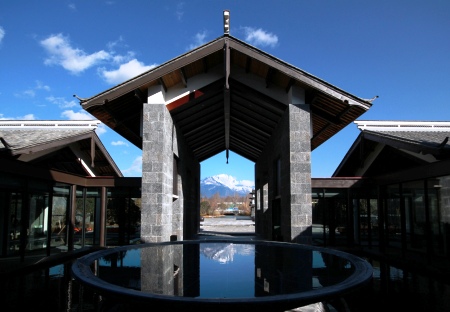 While in Shuhe, what we discovered was a town that was closer in spirit to the Dayan of ten years ago than to the Dayan of today. Weather ranged from cold, gray and rainy to warm, blue-skied and sunny, but it didn't really matter, we were enjoying Shuhe's laid-back pace of life. We knew we'd left the city when we saw beers and vegetables chilling in a mountain stream flowing through town.

We were lucky enough to encounter older local residents who were living links to the area's days as a stopover on the Ancient Tea and Horse Road. Horse and mule caravans carrying tea to from Yunnan to Tibet or horses, yak products or herbal medicines from Tibet to Yunnan would often pick up silver or brass items while in Shuhe. 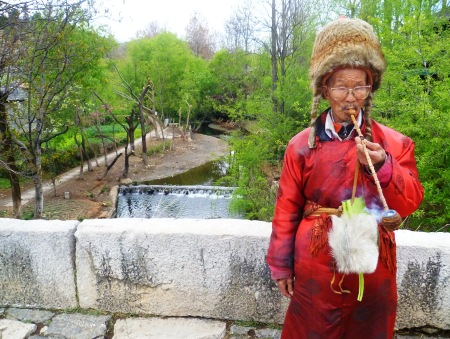 While standing on the Qinglong Bridge (青龙桥), a centuries-old stone structure that has been worn smooth by today's tourists as well as the old trade caravans, we spoke with an 87-year-old Naxi man smoking a long pipe while decked out in old-school Chinese attire and a large furry hat. He didn't care to talk much about the old muleteers, but was happy to pose for a few photos, for a fee.

Wandering around Shuhe's northern end, we found a small courtyard home where a Bai family that moved from Dali to Shuhe during the days of the Ancient Tea and Horse Road still makes and sells traditional tie-dyed Bai batiks. When asked how long his family had been living in Shuhe, Duan Rongkun (段荣昆) said it had been at least a century. 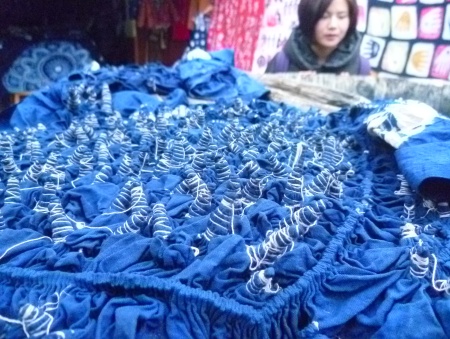 Bai-style tie-dyed batiks, made by the Duan family

"My family's been here for more generations than any of us can remember," he told us as batiks on clotheslines fluttered throughout the windy courtyard. Surprisingly, Duan said that he made his dyes from isatis root, the medicinal herb known as banlangen (板蓝根) in traditional Chinese medicine.

Part of the appeal of Shuhe for us is being in Lijiang, but far from the commercialization of Dayan, especially its traditional trading square, Sifangjie. When we visited the Ancient Tea and Horse Road Museum in on Zhonghe Lu, it was a younger Naxi woman who made us look at Dayan and the rest of Lijiang's economic development in a new light. 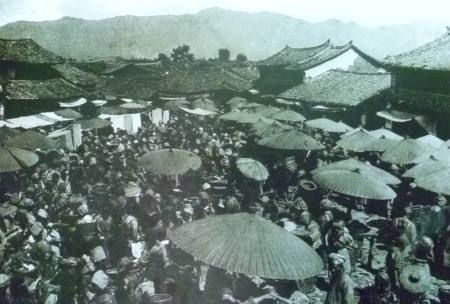 Wang Shihua (王世花), who works as a guide at the museum showed us an old photo of Sifangjie in Dayan taken by the botanist Rock about 80 years ago. Merchants and traders packed the square, busy haggling and making deals.

"A lot of people complain that Lijiang, especially Sifangjie, is too commercialized," Wang said. "What they don't realize is that it actually used to be more commercialized back then than it is now."

All of the numerous black and white photos of Lijiang and other stops along the old trade route, which nicely complement the handful of artifacts from the old caravan days, were taken by Rock.

The museum, which opened in 2003, resides in a residential compound built in the 1600s by Mu Zeng (木增), the 19th and most powerful and respected tusi (local ruler) of Lijiang.

The tragic impact of the Cultural Revolution (1966-1976) can still be felt today in the museum. Lijiang once had more than 200 unique murals that blended elements of Taoism, Tibetan Buddhism and Chinese Buddhism in a style reminiscent of Tibetan thangka painting. 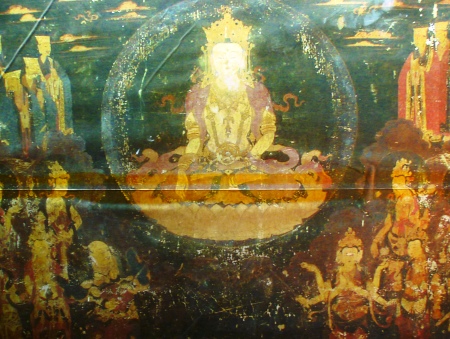 Today only 50 of the area's murals remain, with only six left in Shuhe, three of which are in the museum. Many of the faces in the paintings were scratched off, but had it not been for the bravery of a local primary school teacher who protected them from vandals, there would be no murals in Shuhe whatsoever. The museum is currently applying for protected status for the murals.

Visiting Shuhe isn't just about what it used to be, there is also fun to be had in the here and now. At night, many of the larger restaurants and bars in town feature live music, which is usually a singer/guitar setup playing songs for couples visiting from other parts of China. It is also home to the Snow Mountain Music Festival, which every year brings musicians from around China and the world together for several days - take a look at behind-the-scenes footage from last year's festival here. 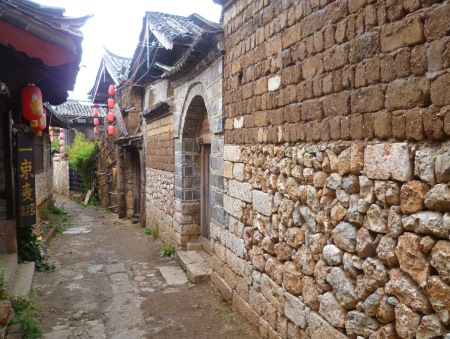 For as small a town as it is, Shuhe has a decent amount of nocturnal activity. We stumbled upon the guesthouse/bar Traveling Horses our first night in town and found ourselves coming back the next two nights for its combination of cozy atmosphere, reasonably priced drinks (a slight problem in Shuhe) and nightly live music. Over the course of three nights, we enjoyed an entertaining mix of folk, rock and indie pop while sipping on cold beers next around a warm fire with travelers from all over China.

It's not as labyrinthine as Dayan, but Shuhe can still a bit of a maze, especially at night when all the dark streets look the same. On our first night in town we managed to get remarkably lost – those beers certainly did not help. It's highly recommended that when venturing out for a night on the town in Shuhe, you make note of your surroundings as you go. 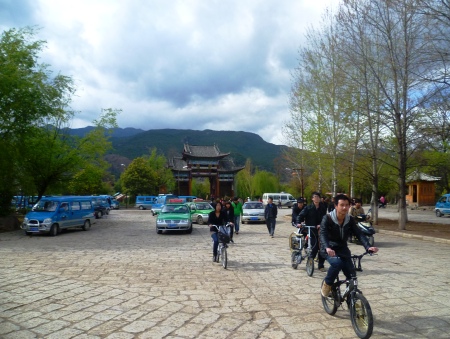 Getting There
Only five kilometers outside of Dayan, Shuhe is a short bus, taxi or bicycle ride from Dayan and Lijiang's new city – simply head north on Xianggeli Dadao (香格里大道) until you reach a T intersection, then take a left and you will find the main entrance to the old town area. Most of this area is actually new, so you'll need to head to the northern and western neighborhoods if you want to check out the older sections of town. Lijiang can be reached from Kunming by train, bus or plane. 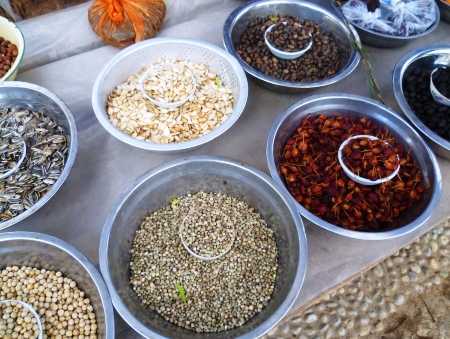 Food & Drink
Shuhe has a decent range of food from around China, be it Naxi food, Yunnan or Sichuan cuisine, northeast Chinese food or even French and Italian food on the main restaurant and bar street that runs east-west through the center of town. After 10pm, choices thin out drastically, with barbecue the main non-bar food option. The Pullman's Western restaurant Xi is one of the top Western restaurants in Yunnan.

Didn't that old guy used to have a monkey?

I remember an old guy with a monkey that used to take photos with tourists on one of the stone bridges in Dayan several years back, pretty sure that was someone else but I may be wrong.

If we had known you were coming to Shuhe, Highland Explorations could've taken you out to experience the more adventurous side of Shuhe. For example: rock climbing on the cliffs west of Shuhe, overlooking the entire town. Highland Explorations make our home in Shuhe and will be glad to show any visitor the opportunity for outdoor adventures you didn't expect in this beautiful little village.

I had stay there for 2days for relax.Forgot everything.

It's so much cleaner and peaceful. @HELEN, truly a fun place to get serene. One of the best places I've been in China, modern or old.

I don't know what you guys were taking, but when we went there, it was heavily commercialized with unbelievable amounts of bars and the same scarf shop happening over and over and over again. Get away? Get away from urban areas maybe to a place transformed into a hub for tourism, where nobody except businessmen and their families lived, it seemed.

I suppose that the creeping commericialism is slowly but surely taking over, even in out of the way places like Shuhe.

I visited about 5 years ago and it really was quiet. Everything must change I suppose. Very sad, but inevitable. And who are we to deny the people of the outlying villages a slice of the pie?