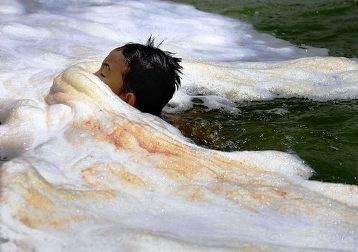 In what has seemingly become a yearly ritual, Kunming's municipal government announced yesterday that it will allocate one billion yuan (US$146 million) to clean up Dianchi Lake.

The announcement of big government initiatives to clean up Dianchi Lake and the 35 heavily polluted rivers that flow into it is nothing new – what is new is the relative frankness of yesterday's announcement by Kunming mayor Zhang Zulin (张祖林) during an interview with China Daily in which he referred to the lake as an "eyesore" and said that cleaning the lake has been "one of the most difficult problems for the country".

At present, the lake is covered with a slimy layer of green algae and a heavy smell of human waste, which is attributable to most of the city's domestic sewage being pumped directly into the lake, according to Yunnan Normal University professor Li Kangli, as cited by China Daily.

Zhang said that cleaning up Dianchi is at the top of Kunming's agenda for 2009, but making even mild progress on the lake's cleanup will require a massive effort. Since the 1990s there have been several highly publicized attempts by the municipal government to clean up the lake, none of them yielding any substantial results.

Some government cleanup work has actually worsened the situation – in October 2006 a dredge that was supposed to be cleaning Dianchi was actually discharging used oil into the lake, creating an 18,200 square meter oil slick on the lake, which was once the source of Kunming's drinking water.

Mayor Zhang said that the Kunming government would be working on "controlling sources of pollution, dredging, diverting other water sources and the ecological restoration of the lake". Each of the 35 polluted rivers flowing into the lake have had an official assigned to oversee treatment.

Heavy emphasis is being placed on the Panlong River (盘龙江), which according to city statistics is responsible for more than 40 percent of the pollution flowing into Dianchi in recent years.

By 2020, 100 billion yuan in funds will have been spent on cleaning up the lake, according to unnamed government sources cited in the China Daily report.

Note: The above photo of a child swimming in Dianchi Lake was taken in July 2008 and won the bronze prize in the China News Photography Institute's annual 'Golden Lens' news photograph competition earlier this month.

disturbing picture, no wonder it won a prize!

Elsewhere this would be an unbelievable picture, but in China ....

My focus in this article was; "controlling sources of pollution ...." Does this mean, slowing it down, diverting it to another lake, or some other useless idea. Will the authorities have real power to strongly penalize the corrupt polluters -- or are they relying on one billion yuan every year?

I would surely love to be an auditor on the project.

There is a green Canadian technology called PBS that could permanently clean that lake to almost swimming pool quality without chemicals or any adverse affect to the environment. Suggest smeone tell the local officials about this so perhaps they could better use the billions tey are wasting. The company is called Pacific Blue Solutions.

No one is going to 'permanently clean' Dianchi. With this annual clean up fund available, there will be vested interests in keeping it polluted.

Actually - QiuHe - before he left office - did manage to make MAJOR advances in improving Dianchi's water quality - he attacked the sources of pollution - most of the feed-in tributaries and their respective polluters. By strangling the pollution at its source - this resulted in a much faster improvement in Dianchi's water quality than the typically wasteful, useless, and unsustainable topical solutions - although @george may be on to something as a complementary solution.

Dianchi's toxicity has been reduced an order of magnitude. Now that QiuHe is vice gov of Yunnan - we should expect that he'll also keep his eye on this project to make sure the work he did to clean up the lake continues until the lake is once again drinkable (potable) - and hopefully bringing it back to life with marine life and fauna.

QiuHe is Yunnan's Steve Jobs. Demanding, but visionary - and with the power to enforce what's best for society as a whole...yeah - I'm a fanboy.