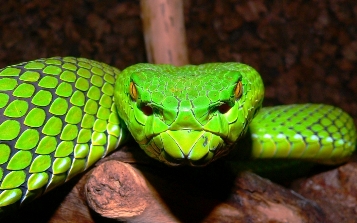 More than 1,000 new species of plants and animals have been discovered in the Greater Mekong Region in the last ten years, according to a new report released by the World Wildlife Fund (WWF).

The report, 'First Contact in the Greater Mekong', states that in the last decade 519 plants, 279 fish, 88 frogs, 88 spiders, 46 lizards, 22 snakes, 15 mammals, 4 birds, 4 turtles, 2 salamanders and a toad have been discovered in the Greater Mekong Region. The region consists of Yunnan province in China plus Vietnam, Laos, Myanmar, Thailand and Cambodia.

Some of the more eye-catching discoveries include the bright pink cyanide-producing 'dragon millipede', a huntsman spider with a leg span of 30 centimeters and the neon Gumprechts green pit viper. Not surprisingly, many of the newly discovered species were found in the jungles and wetlands around the Mekong River. Yunnan in particular was home to many of the plant and reptile species discovered.

Scientists involved in the research were understandably excited by the unexpectedly large numbers of newly discovered species coming out of one area.

"This region is like what I read about as a child in the stories of Charles Darwin," said Dr Thomas Ziegler, Curator at the Cologne Zoo. "It is a great feeling being in an unexplored area and to document its biodiversity for the first time... both enigmatic and beautiful."

The last decade of research reasserts the Greater Mekong Region's status as one of the world's most biodiverse areas. Much of this biodiversity is under threat by deforestation and other human activities, though, with 900 endangered species in Vietnam alone.

The WWF report urges the six countries of the Greater Mekong Region to adopt a formal cross-border agreement to create a framework for working together to protect the region's biodiversity.

i love this article.

only one small error: it's actually World wide Fund for Nature or World Wildlife Fund, not world wildlife foundation.

thanks lulu, the necessary correction has been made

You are welcome. thanks for great reporting as always.