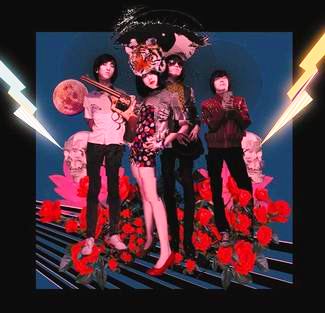 One of the more popular bands of the moment in the Beijing rock scene - Queen Sea Big Shark (后海大鲨鱼) will bring its live show to Kunming Saturday night, when it performs at Laowo Bar across from the main gate of the Yunnan Art Institute.

Formed in 2004, Queen Sea Big Shark has quickly emerged as one of the more active bands in Beijing. The twentysomething band's music, often described as 'dance rock', features retro-style 80's beats, plus a smattering of punk and surf rock and English lyrics.

In addition to the domestic status that comes with being on the Modern Sky label, Queen Sea Big Shark has also opened for international acts performing in China including the Yeah Yeah Yeahs, Maximo Park and Mando Diao. Its self-titled debut album on Modern Sky was released on the last day of 2007 - the band has been touring China to promote the album since the beginning of March.

Admission to the show is 25 yuan (20 yuan for students) including a beer or a non-alcoholic drink. Showtime has yet to be confirmed – call Laowo Bar at 2924115 for more information.