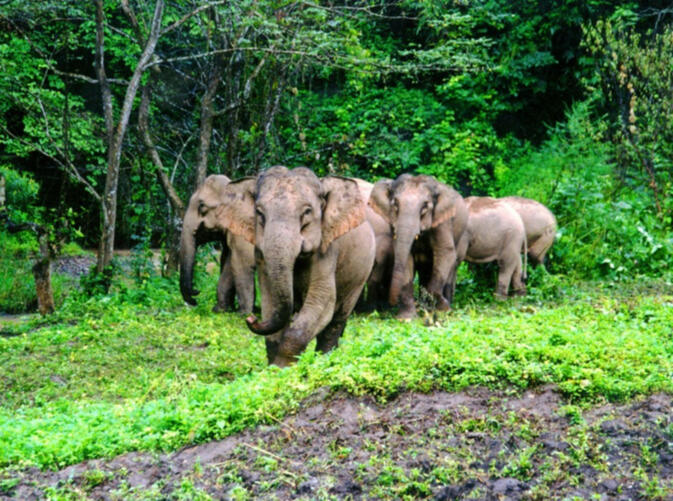 A tea farm worker in Yunnan's southern Xishuangbanna Prefecture was reportedly killed by a group of elephants on June 30. The victim, a 51 year-old migrant worker surnamed Cao, is the second person in two months to fall victim to a passing herd of elephants in the same small village.

The most recent incident occurred at 6am in Dadugang Township (大渡岗乡), as Cao was walking to his job at a tea plantation. Details are slight, as there were no apparent witnesses, but Cao was pronounced dead by forestry police officers shortly after they responded to an emergency call from villagers living nearby.

In late April, a similar incident claimed the life of another farm worker walking along a rural road outside of Daduguang. The town sits 45 kilometers north of the city of Jinghong (景洪), and local and prefectural forestry police are currently conducting investigations into both deaths. The working presumption is that a group of 18 elephants that move between the region and neighboring Pu'er Prefecture could be to blame, as they are held responsible for at least five other deaths over the past two years.

Like many people in Dadugang this time of year, Cao — who was originally from Mojiang (墨江) — was working seasonally picking tea. Due to a government insurance fund, his family is eligible for up to 500,000 yuan in accidental death benefits. The compensation scheme has been in place for most of the past decade, designed to provide indemnities for farmers who have their crops destroyed, suffer injuries or are killed by wild elephants.

While the estimated 300 wild pachyderms of southern Yunnan are a huge tourist attraction, managing them is something of a perpetual headache for authorities. Protected under China's most stringent wildlife preservation laws, the province's elephants are permitted to wander freely through the forests of Xishuangbanna and Pu'er.

A bilateral agreement between China and Lao signed in created a cross-border sanctuary for the animals in 2009. Since then, Yunnan's government has introduced a series of 'elephant canteens', and stepped up education efforts teaching farmers how to avoid conflict with elephants. However, interactions with humans, some of them violent, have proven inevitable.

These are sad events for both the victims, their families but also because of the slow demise of the elephant population. Legally, can elephants be 'held responsible'? I truly don't know the legal answer but my feeling is that they can not. While the text is clear in meaning, by using: 'as they are held responsible', it deflects from asking questions about where responsibility really lies and who, or what authority, allowed and continues to allow destruction of the natural habitat and can it ever be restored, particularly if they are treated as a tourist attraction for casual day-trippers. The elephants will never get their day in court, they'll be summarily killed, if only because the locals will need to defend themselves.

People might want to read Retreat of the Elephants by Mark Elvin.

Fire is also responsible for many deaths, as is disease .

I don't think elephants are the biggest threat to Chinese farmers.

But in this instance they literally are the "biggest threat."

When a baby elephant calf is protected by a herd of aunts and uncles, particularly ones in a trumpeting musth, don't be a dumbo obstructing their migratory path.

If their tails are stiff, signalling they may be threatened by your presence. Like most animals in the wild, they move faster than you. So slowly walk away unless you wish to be crushed by two tons. Tail swaying from side to side means they cool.

Also, elephants have good memories. Perhaps aggressive ones are more defensive because they may have remembered incidences where their mother or father were victims of poaching. Resentment and distrust harbored for decades since childhood.

a short clip of a man in india being trampled by an elephant.
WARNING! VERY DISTURBING!)
www.youtube.com/watch?v=axNk7X3sPZk

July 26, 2021 "Summit Language school is looking for qualified and enthusiastic teachers to join our team starting next semester (16th August 2021). The school is l …"
Living in Kunming DanTheMan