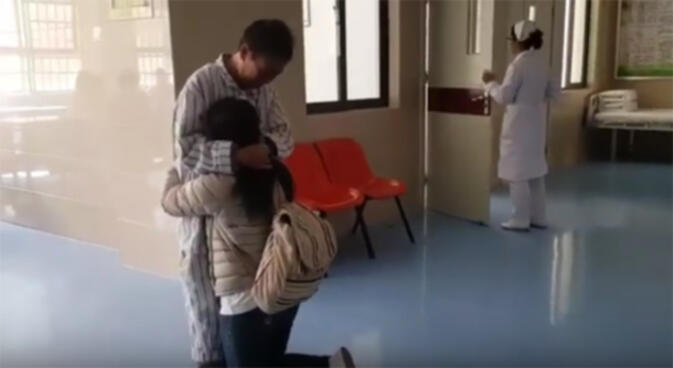 A woman who apparently walked alone for months along highways and back roads across three international borders has been reunited with her family in Kunming. The 59 year-old was picked up by police in Yunnan's capital city in mid-February after going missing for more than eight months.

Kaewmanee Ajor disappeared without a trace from Chiang Rai, Thailand in June 2018. Her family reported her missing to local police, disclosing that she had been diagnosed with early onset Alzheimer's disease prior to vanishing. Kaewmanee Ajor was taken into protective custody after Chinese security officers found her walking along a stretch of the Bangkok Expressway on the outskirts of Kunming.

Once in custody, Kaewmanee Ajor — pronounced healthy and in good physical shape by local doctors — told police officers she had walked from Thailand, through Laos and into China. However, she was unable to explain how she obtained food, water or shelter, or how she managed to cross international borders.

Chiang Rai is the northernmost major city in Thailand, sitting close to the borders of both Laos and Myanmar. As the crow flies, Chiang Rai is just under 800 kilometers away from Kunming. Overland by road, the journey stretches well past 1,000 kilometers.

After Chinese police found Kaewmanee Ajor, they contacted officials at the Thai embassy in Kunming. Legation staff, in turn, notified the woman's family. Thai immigration police then arranged for Suchada Ajor, Kaewmanee Ajor's daughter, to fly to the Spring City free of charge. The two were reunited in a Kunming hospital on February 15.

Police in both countries are attempting to reconstruct Kaewmanee Ajor's path into China. They assume she left Thailand near or at the international border of Houayxay in Laos before possibly moving north and entering Yunnan in the city of Jinghong. The how of this miraculous journey will most likely never be known, but for Kaewmanee Ajor and her family, such details may be irrelevant now that they are reunited.

Nice to know that international borders can still be crossed illegally.

Inadvertently she's shown the way for those who regularly rant about modern transport while hypocritically, and equally regularly, taking flights between northern Thai cities and Kunming.

Yeah sure. Take a taxi and disqualify yourself from contradicting Trump on global warming. Very helpful contribution.